Scranton, Pennsylvania's claim to fame is being the site of the first operating electric streetcar. Nicknamed "The Electric City," it only makes sense that Greg Daniels would make it the setting of a little show called "The Office" in 2005. Perhaps he thought it would pick up steam in the city.

On a sunny May day eight years later, approximately 10,000 people swarmed the hilly Pennsylvania town for the "Office" wrap party. Kids, parents, college students, couples and groups of friends lined up along Monroe Avenue to watch the quirky characters they had come to know and love parade through town to say their final goodbyes.

10k in downtown Scranton for the Office wrap party. Amazing. So moving. pic.twitter.com/0oDjURXYwz

"I don't personally feel responsible [for Scranton's fame]. I think it's part of the synergistic overview of the whole thing," Creed Bratton, who plays none other than Creed Bratton, told HuffPost TV after the parade. "It's a mutual thing. They made us and we made them. It's kind of cool. It's like a ramora and a shark."

"The Office" wasn't filmed in Scranton, of course -- most of the scenes were shot at the Chandler Valley Center Studios in Los Angeles -- but the cast members still hold it near and dear to their hearts.

As Michael Scott (Carrell) once said, there "ain't no party like a Scranton party," and the cast proved him right when they performed a series of musical numbers with the Scrantones -- the band responsible for the theme music in "The Office" -- at the courthouse downtown. Although Fischer (Pam) cried a few times (hey, someone had to do it!) the cast mostly had a blast.

Although "The Office" cast is finally moving on from Scranton and Dunder Mifflin, they didn't shy away from taking memorabilia with them.

"I took all of Pam's jewelry. The necklaces and earrings she's always wore, and there's a necklace that spells out CeCe in morse code, I took that," Fischer told HuffPost TV. "I took her candy dish. I took a purse she's always carried, so ... the personal items."

As much as she took, though, Fischer was jealous of Craig Robinson's (Darryl) find: a (presumably stuffed) duck.

"You took the duck?" Fischer exclaimed.
"I took the duck," Robinson said."
"You're so lucky you got that duck!"

Will The Finale Be "The Greatest Episode Of Television" Ever?

As much faith as they have in the "Office" writers, the cast is well aware that they have a lot to live up to when it comes to the series finale. Luckily, most of the actors are confident that viewers will get everything they want out of it.

"They'll get closure," Robinson said. "They'll get what they've come to expect form 'The Office': humor, heart, awkwardness. And love."

"[Fans will] get to say goodbye to all the different aspects of the show that they've loved," Fischer added. "The relationships, the humor, the quiet moments. I think the finale has all of those things."

While Oscar Nunez (Oscar) knows "you can't please everyone," noting that series finales are very hit or miss, he hopes "The Office" has had a positive impact on viewers over the years.

"If it inspires some kids to do comedy," he told HuffPost TV. "I'm happy."

But as far as Brian Baumgartner (Kevin) is concerned, there's no question as far as the greatness of the "Office" finale.

"I think it's the greatest episode of television that I have seen," he said. "I know that's a bold statement, but the reason I say that is because there was a plan for the end of the show for eight years. Greg [Daniels] had an idea of what he wanted to do and how he wanted the show to end, and it plays out over not just the finale, actually, but the second to last and episode and the last episode was an idea he had from the very beginning."

Will He Or Won't He?

And finally, the million dollar question: Will Steve Carrell make an appearance in the series finale?

“I’m hopeful, but I don’t think [Carell] will be back,” NBC Entertainment Chairman Robert Greenblatt told reporters in January, while Robinson said in a conference call last week that the possibility was a slim one.

"I think Steve felt, and I agree, that the 'Goodbye, Michael' episode was his goodbye and he didn't want to overshadow the ending that all the other characters deserved," Robinson said.

But Carrell did make an appearance at the end of the Scranton wrap party to the surprise and excitement of every guest.

"It would be very cool if [Steve Carrell] came back. It would be kind of exciting, wouldn't it?" Bratton said with a glint in his eye.

Two days later, TVLine reported that fans will see Michael Scott in the "Office" finale, but NBC will not confirm the report.

PHOTO GALLERY
"The Office" Wrap Party In Scranton
Download
Calling all HuffPost superfans!
Sign up for membership to become a founding member and help shape HuffPost's next chapter
Join HuffPost 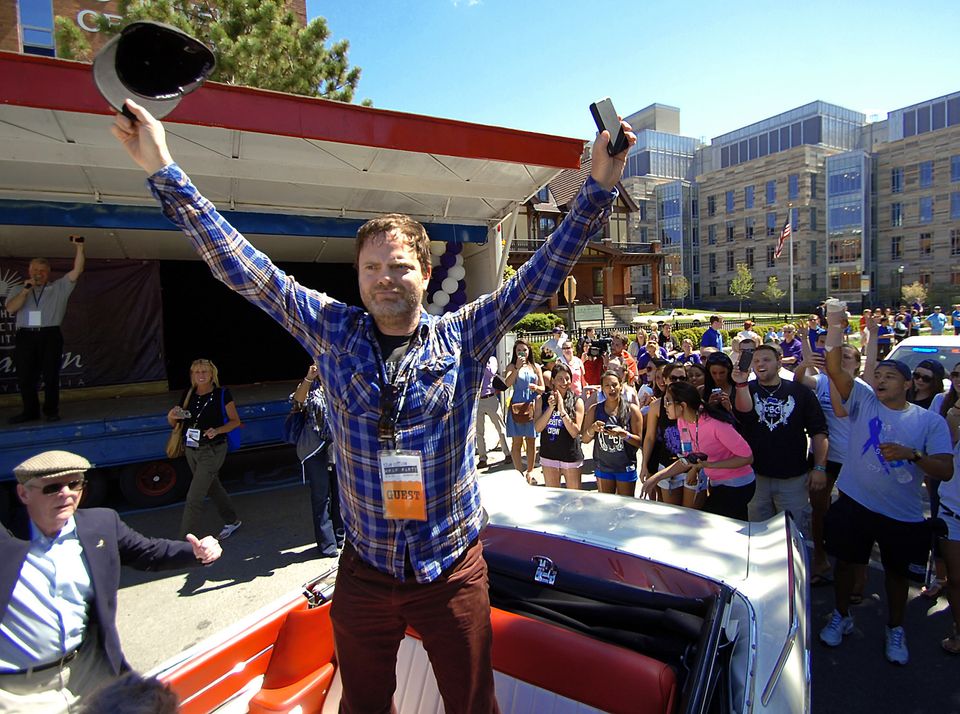 1 / 27
"The Office" Parade
"The Office" actor Rainn Wilson acknowledges thousands of loyals fans on Saturday, May 4, 2013 in downtown Scranton, Pa. during "The Office" Parade. The actors who play Pam, Jim, Dwight and other beloved characters from the popular NBC show "The Office" bade farewell on Saturday to the northeastern Pennsylvania city of Scranton that served as the TV setting for their fictional paper company.
AP Photo/Scranton Times & Tribune, Butch Comegys

'The Office' Wrap Party: A Day Of Goodbyes In Scranton, PA
The Office Season 9 Photos 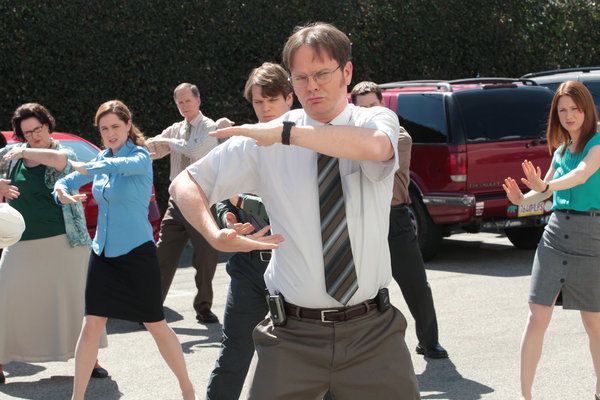