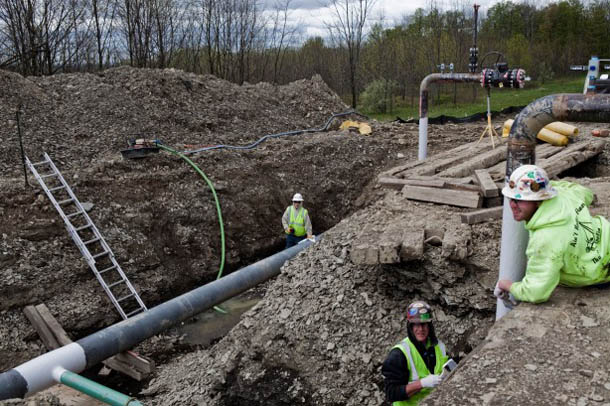 What if I told you that a recent study found that relatively new, unconventional ways to produce oil and gas--horizontal drilling and hydraulic fracturing, or "fracking"--added an average of $1,200 to U.S. household disposable income in 2012? And that this drilling "revolution," enabling the industry to recover previously inaccessible shale reserves, supported 2.1 million jobs last year and is projected to support 3.3 million by 2020?

But what if I told you that the study not only exaggerates the number of fracking-related jobs, but also that it was funded by the oil and gas industry's trade association--the American Petroleum Institute (API)--along with, among others, the American Chemistry Council, America's Natural Gas Alliance, the National Association of Manufacturers, the Natural Gas Supply Association, and the U.S. Chamber of Commerce?

Maybe you wouldn't be as impressed.

What is most egregious about this self-serving study, however, is that it tells only half of the story. What's missing are oil and gas's considerable drawbacks, notably their impact on public health, the environment and the climate. It's analogous to a tobacco industry-funded study claiming a new type of cigarette created new jobs and saved smokers money without mentioning the obvious associated health costs.

Does it matter that this study--the third in a series by the consulting firm IHS Global Insight--is so one-sided? Certainly. News organizations have already reported its findings uncritically, and it bolsters the industry's cred in Washington, giving the industry's friends on Capitol Hill another weapon to fight against stricter controls on shale drilling.

Kyle Isakower, API's vice president for policy and economic analysis, told the Pittsburgh Post-Gazette that a study by a firm of IHS's stature should impress government officials. "It's important for us," he said, "that we've got credible data to help educate policymakers about energy policy."

A number of industries have been trying to exploit the jobless economic recovery by claiming they could create millions of jobs if the government would just get out of the way. The oil and gas industry is one of the worst offenders.

Over the last few years, API has funded a number of studies that make dubious job claims. A 2009 PricewaterhouseCoopers study, for example, maintained that the oil and gas industry supports more than 9 million jobs. Another study, conducted by Wood Mackenzie in 2011, estimated that building the Keystone XL pipeline, drilling in protected federal land and coastal waters, and relaxing fracking restrictions would create 1.4 million new jobs.

Like these previous API-funded studies, the IHS study--which just looks at a subset of the industry--overstates the number of jobs linked to shale oil and gas development by including "direct" jobs, "indirect" jobs at oil and gas industry suppliers, and "induced" jobs--the people who provide products and services to oil and gas employees and their suppliers' employees. According to an API ad promoting its 9 million jobs claim, induced jobs can include just about everybody, from bakers to bank tellers, lawyers to librarians, and real estate agents to retail clerks. All told, the ad cites 42 job categories.

Keeping that in mind, let's look at IHS's numbers. The consulting firm says that last year unconventional shale oil and gas development and "energy-related chemicals activity" supported some 2.1 million jobs in the lower 48 states. About 494,000 were direct jobs, nearly 640,000 were indirect jobs, and nearly 1 million were induced. About 17,300 of the workers IHS included in its direct jobs category actually work at chemical plants that manufacture natural gas-based products. IHS counts them because it says they wouldn't have jobs were it not for the "revolution" in unconventional oil and gas production.

Let's put aside indirect and induced job stats, which are imprecise at best, and focus on the most reliable data for direct jobs. According to the Department of Labor's Bureau of Labor Statistics, the oil and gas industry employed 570,251 people at the end of last year. That includes workers in conventional and unconventional development, as well as 13,641 people in Alaska. Excluding the Alaskan workforce, there were 556,610 employees in the lower 48.

When you compare IHS's numbers with government data, IHS's numbers don't add up. Even if you don't count the chemical industry jobs, which should be considered indirect anyway, IHS is essentially saying that 85 percent of the oil and gas industry's employees in the lower 48 states are involved in shale fracking-related work. That's just not plausible. And no matter how much the industry huffs and puffs about millions of jobs, the fact is the number of people it employs directly--570,251--amounts to only one-half of 1 percent of total U.S. private sector jobs.

The Hidden Costs of Oil and Gas

So what about that extra $1,200 that we supposedly found in our wallets last year? That's IHS's estimate of how much more each U.S. household would have had to spend if shale oil and gas were left in the ground. All told, the consulting firm estimates that U.S. households saved $138 billion last year and predicts the savings will jump to $2,700 per household in 2020 and $3,500 in 2025.

Again, IHS is not telling the whole story. There's no doubt that lower natural gas prices have saved consumers money over the last few years, but there are other factors that have contributed to lower electricity and heating bills, including reduced demand and energy efficiency. And natural gas prices are unlikely to remain so low. The Department of Energy's Energy Information Administration (EIA) projects that after 2015 natural gas prices will rise steadily over the next three decades.

So the consumer benefits are likely temporary, but what about oil and gas's societal costs? They're potentially permanent--at least when it comes to the climate. It's here where IHS study is the most misleading: It left out the bad news.

First of all, oil and gas production causes air and water pollution and, of course, spills. The 2010 BP blowout in the Gulf of Mexico is probably the most extreme recent example of what can go wrong, but since then there have been more than 600 oil pipeline spills across the country, the worst of which fouled Michigan's Kalamazoo River with more than 840,000 gallons of crude. And just last week, massive flooding triggered at least 18 spills in Colorado.

On the consumption side, the transportation sector--which still mainly runs on oil--is the biggest source of air pollution nationwide. Chemicals and particulates in vehicle exhaust have been linked to cancer and cardiovascular and respiratory diseases. And a recent MIT study published in the journal Atmospheric Environment reviewed air pollution data from nearly 5,700 U.S. cities and found that vehicle exhaust causes 53,000 premature deaths every year.

But oil's social costs go beyond death and disease. In 1998, the International Center for Technology Assessment (ICTA) issued a report, "The Real Price of Gasoline," that also factored in oil and gas industry tax breaks and subsidies; the U.S. military presence in oil-rich regions; environmental and social costs; and other externalities, including climate change-related insurance losses. The report may be dated, but its conclusions are still illuminating. It calculated that the price tag for all of gasoline's external costs ranges from $800.7 billion to $2.4 trillion in today's dollars--dwarfing IHS's estimate of $138 billion in energy savings last year.

ICTA made its calculations based on an assessment of conventional oil development. There's less hard data when it comes to the more recent, unconventional approaches to oil and gas drilling. A September 2012 report by the Government Accountability Office (GAO) on fracking's environmental and public health risks concluded that those risks, which are primarily to air and water quality, remain largely unknown.

Adrienne Alvord, the Union of Concerned Scientists' (UCS) western states director, explains why the GAO came up empty-handed. "Questions about the safety, public health and environmental impacts of fracking have been difficult to answer in many cases because limited information is available in the public domain due to a combination of trade secret protections and uneven, weak or nonexistent regulations," she said at a UCS-sponsored fracking forum in July. "It's even difficult to determine where, when and how fracking may be taking place."

Nevertheless, we do know that oil and gas developers are exempt from key provisions of at least seven of the 15 major federal environmental laws that protect air and water from toxic chemicals. Giving the industry a free pass to flout these safeguards not only allows it to pollute with impunity, it also shifts the cost of monitoring, remediation and cleanup to taxpayers and can have a devastating impact on local communities where frackers have set up shop.

On the consumption side, natural gas may be the cleanest fossil fuel, but it is still a major contributor to global warming. The electric power sector accounts for nearly 40 percent of U.S. carbon pollution, and last year natural gas--which recently has been replacing aging coal and nuclear facilities--was responsible for a quarter of those emissions, according to EIA. If more utilities turn to natural gas during the next few decades, the electric power sector could emit 5 percent to 25 percent more carbon emissions than today's levels through 2050, according to a new UCS report, "Gas Ceiling: Assessing the Climate Risks of an Overreliance on Natural Gas for Electricity."

The bottom line? The cost of exempting the industry from environmental regulations and failing to rein in its carbon emissions far outweighs any short-term benefits the IHS study touts, exaggerated or not.

Fortunately, there are practical, affordable ways to get to where we need to go. UCS's National Oil Savings Plan, for example, demonstrates how the United States can cut projected oil use in half over the next 20 years by developing low-carbon fuels and electric vehicles, expanding public transportation alternatives, and improving the energy efficiency of planes, trains, ships, factories and homes. Likewise, UCS's "Gas Ceiling" report recommends steps that local, state and federal governments can take to improve energy efficiency and boost renewable energy's share of the electric power supply to 25 percent by 2025 and 80 percent by 2050, which the Energy Department's National Renewable Energy Laboratory says is eminently feasible with today's commercially available technology.

In the meantime, expect to see a steady stream of slick industry-funded studies gushing over oil and gas. But don't be fooled. It's all too appropriate that one of the trade groups that paid for the IHS study was the Fertilizer Institute.