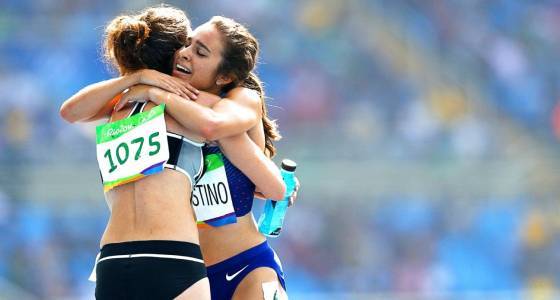 I've admitted to being a sucker for the Olympics.

But, truthfully, I am a sucker for those moments that, to me, are redolent of what the Olympics are supposed to stand for, whether they are incredible feats of prowess by individuals or teams or whether they are moments that rise above sports and enter into the realm of the truly transcendent...the almost spiritual.

Let's be clear: for every transcendent moment, there is a Ryan Lochte, who apologized for his behavior in Rio on Instagram.

There are athletes who dope and otherwise cheat to stay ahead:

TIME: "Team USA Is About to Be Kicked Off its Doping High Horse in Rio"
The Guardian: "Darya Klishina, Russia's only track and field athlete in Rio, banned"
Daily Mail: "Two Olympic Athletes in Drug Shame..."

And there are the countries who forfeit rather than play, bringing hatred and sectarian strife into the games.

Newsweek: "Saudi Judo Competitor Forfeits Match to 'Avoid Israeli' in Next Round"

But don't be fooled: none of this is endemic to our era with our heightened media coverage, our digital social sharing and our celebrity obsessions. Nor is it the result of our world being out of control or some growing lack of values--even if that might true, to some, in a macro, global sense.

In fact, these issues are as old as the games themselves, as old as Athens:

Cheating, bribery and scandal: how the ancient Greeks did the Olympic Games

While in antiquity instances of bribery remained the exception - and were heavily punished - there's plenty of evidence to suggest that attempts to manipulate the outcome of the competitions are as old as the Games themselves...

Attempts to influence the outcome of the Games confirm that the competitive streak ran strongly through ancient Greek culture. In a world where few believed in an afterlife, this-worldly glory mattered immensely. And what better opportunity to show off than competing with others before an audience from all over the Greek world?...

From 776BCE on, the Greeks gathered every four years to celebrate the Olympic Games and compete in a number of disciplines, including the foot race, boxing and various equestrian skills.

Such attempts to influence the outcome of the Games confirm that the competitive streak ran strongly through ancient Greek culture. In a world where few believed in an afterlife, this-worldly glory mattered immensely. And what better opportunity to show off than competing with others before an audience from all over the Greek world?

The Alexandrian boxer Apollonius arrived at the Games too late and was banned from competing. He claimed that bad weather had made it impossible for him to arrive on time. This was a straight lie: it turned out that Apollonius was late because he had secured himself a nice payout at some other Games.

What happened next was even more outrageous. In the words of the author Pausanias:

In these circumstances the Eleans shut out from the games Apollonius with any other boxer who came after the prescribed time, and let the crown go to Heracleides without a contest. Whereupon Apollonius put on his gloves for a fight, rushed at Heracleides and began to pummel him, though he had already put the wild olive on his head and had taken refuge with the umpires. For this light-headed folly he was to pay dearly.

I'm not sure it makes me feel all that much better but at least I know we are not alone...

Now back to Rio.

I mentioned the symbol of the worst of the games--entitlement brought on by faux celeb status...

The moments of competitive greatness are yours to call--for me it's Usain Bolt, the US Women's Gymnastics Team, Phelps, Ledecky and on and on.

But there was that one transcendent moment that balanced out--if even for just a second--Lochte, the Egyptian judo player, and all the other sore losers, cheaters, and entitled asses who collectively create cynicism around the event.

New Zealand runner Nikki Hamblin was lying on the track, dazed after a heavy fall and with her hopes of an Olympic medal seemingly over. Suddenly, there was a hand on her shoulder and a voice in her ear: "Get up. We have to finish this."

It was American Abbey D'Agostino, offering to help.

I loved it. I teared up...yup...Debbie, my wife, did the same. My kids. My friends...in fact, everyone I spoke to had the same reaction. D'Agostino's sportsmanship became a symbol of what could be...what should be.

Then I read the following from Slate:

This is the Olympics moment industrial complex at work. A woman helping another woman on the track becomes "everything that is good and righteous about international sports' grandest competition." It would have been an extraordinary gesture if front-runner Almaz Ayana had stopped, backtracked, and helped Hamblin and D'Agostino across the finish line. It would have been extraordinary if either runner would have come back to win the heat; if they had endured great danger and hardship to get to the Olympics in the first place; if, I don't know, they had been Israeli and Palestinian, respectively, and their actions had bridged a social chasm. I'm not trying to say it wasn't a nice moment. It was quite nice! But why do so many in the media need it to be more than that?

It's hard to read, for me, because it does it hit a nerve. Of course the author is right! Of course it's true! In fact, it's almost sad and pathetic that such a small gesture caused such a huge visceral response. But it did.

And, frankly, rightly so...

That little ripple spread out...that's a fact...and who knows what tsunami of good just might be created by people who get inspired by what can be. Next time, maybe someone will bridge a social chasm or greater...maybe someone will be motivated to transcend some narrow thinking and reach out for the greater good...

But I do know that if we get cynical--and it is so easy for that to happen--we will never change the status quo, and a thousand years from now someone will add our stories to those of the Ancient Greeks around "Cheating, Bribery and Scandal."

A little more than a year ago, I attended the opening of the Special Olympics in Los Angeles. I am still in awe of what I saw and inspired by what I experienced.

In light of the Slate piece I share what I wrote then:

And unlike the Olympics, where politics hold sway and where one country will forfeit a game rather than play against another they somehow hate, despite all the Olympic oaths and such, these games are about inclusion...about a unified world...about a vision of a world where we don't discriminate against anyone, no matter their intellectual or physical abilities.

There is no race, color, religion, national or gender bias anywhere to be found here...

In fact, see the lineup of who passed the torch to whom as it entered the stadium (my family and I carried a portion of the journey in New York together with some close friends)...

Horieh Golchin, a table tennis player from Iran, passed the torch to Eliyahu Somer, a basketball player from Israel, who in turn passed it to Darianny Urtado of Cuba who is competing in badminton...

It can be done.

Beware of cynicism when our very souls are at stake. Listen:

A cynic is a man who knows the price of everything, and the value of nothing. -- Oscar Wilde

In my opinion, Slate is right about the price but is missing the point...the true value.

And then of course there is this from The Washington Post: "The real Ryan Lochte outrage: Matt Lauer not wearing socks for their interview."