I saw a Facebook post going around recently, one of those '50s-style, witty postcards, which said, "Sometimes I write down tasks after I've done them, just to get the satisfaction of crossing them off my list." This is me. I love lists. Family, friends and colleagues will verify this: Christmas gifts are not complete without a shiny new notepad, Monday mornings are not surmountable without the weekly 'to-do' list fully compiled; the idea of approaching a child's birthday party without at least two lists in operation is somewhat abhorrent. I can only assume it's a control thing, a part of my obsessive compulsive personality which feels far calmer about life when I can at least create the vague semblance of being in control of it. Crossing something off a list is achievement, success, affirmation of having accomplished at least something today (even if, actually, I achieved it yesterday!).

Teaching and list-making are both friends and enemies: The lists are endless and the crossing offs are plentiful, but the lists are endless and the crossing off of one thing generally only generates the addition of another. You never get to put a big, fat, black whiteboard marker cross through the whole damn thing. Well, not unless you're retiring, although by then I imagine the lists of things you can finally do now you're not marking every evening are pretty endless, too!

Parenting a disabled child and list-making are both friends and enemies as well. Five weeks after Hannah's diagnosis (five years ago today, hence the reflective post), I had six weeks off work, less because of the emotional trauma we'd been through and more because of the magnitude of the lists that needed to be dealt with. There were a lot of things I didn't know on that day five years ago, not the least important of which was just how many things there would be 'to do.' In the early days, in my naiveté, I would write lists which consisted of seemingly simple statements, such as "sort out seating." Yes, I can hear the ironic laughter of those of you who have been here too. "Ah, bless." I, like you, quite quickly learned that in this game, lists need sub-lists, and sub-sub-lists, and that the chance of ever actually crossing anything off the "master list" is pretty small. No big fat whiteboard marker here either.

And so for the sub lists: emails, letters, phone calls, forms, applications, referrals, appointments, visits, assessments, trials, reports, battles, panels, appeals and then systematically chasing up every one of those again. Repeatedly. For the obsessive compulsive list-maker and crosser-offer, a potentially satisfying exercise: lengthy lists of weighty sounding tasks ("compile report for pediatrician", "complete sensory diet profile referral", "chase SALT, OT and EEG") and multiple daily crossings off. Except, not only does the list never get shorter, I also learned that to actually cross an item off felt both fraudulent and risky. Fraudulent because to me, crossing out means "done", and these things are not done until they have been acted upon and dealt with by the recipient; and risky because if it looked like it was "done", I might forget to chase it up, and that might mean it never got acted upon or dealt with by the recipient. Not so satisfying after all.

Which is appropriate, of course. I'm not sure it would be right for me to be finding anything at all about my daughter's debilitating condition "satisfying." Certainly not the quenching of my own OCD needs. As I said, there are a lot of things I didn't know five years ago today, but I'm pretty sure I did know that the opportunity to write more lists was not going to be the "silver lining" to my almost-3-year-old's devastating diagnosis. Which brings me to the point, the question which the observant amongst you might by now be asking: What are those 10 things you wish you'd known back then? The answer is that I don't know.

But there is no top 10 list. Not this time. All of the above are true, but I think that honestly, with the possible exception of the last, I don't think I'd have wanted to know any of this five years ago. I have written before that our understanding of Rett Syndrome and all that it entails for our family came necessarily as a slow drip-feed, a gradual absorption of our ever-changing reality. The darker days, when I didn't know that one day we'd laugh again, must be part of the process, as much as figuring out how to fight the battles and decipher the acronyms is. The tiny steps of the journey have been crucial to our survival of the distance so far and, I am sure, will continue to be. Besides, as much as I love lists, I could not possibly reduce everything I know now, which I didn't know back then, into 10 pocket-sized bullet points. Really, could any parent? Perhaps the one thing it might have been comforting to know, besides the possibility of a cure within her lifetime, would be that five years later, I'd be able to say that there wasn't really anything I wish I'd have known.

As for that exception, that hopeful possibility, it has come to mean a whole new set of lists, sub-lists and sub-sub-lists in my life: emails, letters, phone-calls, meetings, trips, forms, visits, events, shows, concerts, sales, walks, runs, appeals, reports, requests, applications and then adding it up and starting again. Items which I will happily keep adding and crossing off my lists until finally, the one bullet point on the master list is the only thing left. My big, fat, black whiteboard marker will be ready. 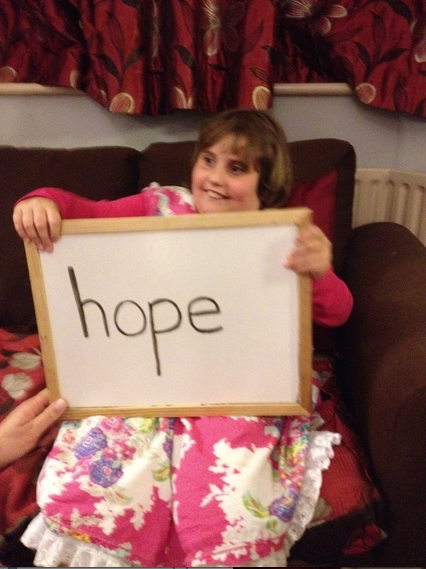