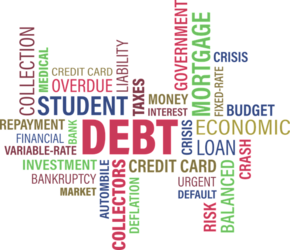 What have you tried to get out of debt? I've considered cutting out my fancy coffee runs to save hundreds a year. I won't do that because I like my fancy coffee, but I could. Well, actually I most likely would if I didn't get free gift cards for it, so that's probably not a great example, but you get the point. I can cut cable, get a cheaper phone plan, or negotiate bills. Using coupons and combining them with sales is a given. There are a million things I can do to save more money and they would all help, but there is one thing that is hands down guaranteed to work better than anything else, and can help you pay down your debt faster than all other approaches combined.

What is this miracle debt busting technique? You already know. You won't be surprised in the slightest when you read it, and you may even be a little annoyed. Even so, it is the absolute best way to make your debt disappear faster. Here goes. The best way to save more money and pay down debt is to make more money.

You Can't Get Blood From a Stone, Right?

Did you roll your eyes? Hear me out! I know you probably already knew that and what you want is additional real life savings tips. There's nothing wrong with that. But here's the thing about focusing solely or mostly on the saving part. At a certain point there's no more saving to be had. Cutting back on expenses and spending less is great and I am totally on board and squarely in that camp. However, after we cut, cut, cut to the bare bone, there is nothing left. Then what? The obvious, but not always pleasing answer is to make more. There's no limit (theoretically anyway) to the amount of money we can make.

Sounds simple, but I know it isn't. It's infinitely easier to find ways to save than it is to earn additional money because there's less risk involved. Cut back on "this" and you've freed up "x" amount of money. Use "y" method and you've saved on "that." Judicious cutting is an excellent habit to cultivate and there are some amazingly inventive and creative ways that people have developed to save.

But bringing in more money? That's a different beast altogether. It's a risk, and though we may fervently wish for it, we don't work nearly as hard on it as we do saving money. Why? It takes a strong stomach to invest time, mental energy, and yes sometimes finances in a venture when there is a very real possibility of little return, or worse, failure. Yet and still, the fact remains that making more money (even while saving in other ways) is the best way to pare down your debt. 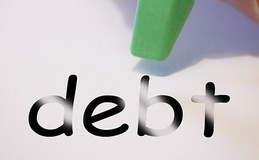 So how do we get to the space where it's safer to take risks? By investing in ourselves, starting small, and not giving up. Hmm, this is starting to feel more like a personal development pep talk isn't it? You'd be right if you thought that because it's definitely connected. See, while there's no denying the obstacles that people face when it comes to making more money (or reaching any goal for that matter), it's also true that we are often responsible for the biggest ones. How many times have we refused to spend $50 on some self-help, tutorial, lesson, type thing that intrigued us because it was "too expensive," or "should be free," only to spend more than that on a dinner out? That is not just about choosing fun because you deserve it. It's also saying you're not worth the investment. You're not worth the risk that that comes when it's not a sure bet.

Investment is not just about money, either. It includes time. Just an hour. A small fraction of the time we spend in our social networks. What if that energy were redirected to making money? Either exploring interests and learning how to profit from them, getting a new job, or generating income immediately through side gigs and hustles. It all counts.

Wanting More Money is Not a Bad Thing

Which do you hear more often?

I bet it's the former because we're so used to being told to do more with less. Flip that script! What if we were able to do more with more? There is nothing wrong with wanting more money and doing something about it. If making more money gets you out of debt faster, do it! Don't hesitate. If it allows you to enjoy some different experiences, bravo!

Having more money is not an automatic license for decadent spending and waste. We don't have to become those people. But wouldn't it be nice to breathe easy because there's no bill hanging over your head? That is the freedom that comes with no debt. Get there faster. Keep finding ways to save, but figure out how to make more too. When you do, just make sure you don't spend more or you'll need more "more" money.

Kim Owens is a psychologist, former college VP, and awesome deal getter currently obsessed with zoodles and launching her new blog MoneyUndertheCushions.
She invites you to get your complimentary copy of the "Goof Proof Guide to Slashing Your Cable Bill (and More) and Saving Hundreds or More a Year!" You'll also receive updates, tips, and inspiration on ways to, "Make More, Save More, and Be Happy." Come on over and join the Money Under the Cushions gang!.