I left university with the notion that large institutions worked methodically on all issues of need in poor countries. When a met Ling, a boy from Cambodia desperately in need of speech therapy services, I discovered that there was a significant need in the developing world being ignored by our world's largest aid organisations.

In university, we were taught that the issues facing the world like malaria, education and human trafficking were like empty buckets lined up in a row, and by filling them up with water we would be addressing these issues. With so many issues in need, there would be thousands and thousands of buckets that would need water. Conventional wisdom might be, due to scant resources, all of these buckets are inadequately filled, but they all receive some attention. In reality, some buckets are well filled while others, like aid for speech therapy in Cambodia, are bone dry. It is not simply an issue of lack of resources, it is also an issue of visibility. Not all issues, like speech therapy in Cambodia, which has been unaddressed and invisible for decades, are created equal.

Two years ago I met Ling, a 10-year-old boy who lives in one of the poorest parts of Cambodia; they do not even have a hospital in his community. I visited Ling's home with CABDICO, a Cambodian organisation that visits children in remote villages, and provides basic services. At the time, Ling slurred his speech due to cerebral palsy that occurred when he was born, and people had problems understanding him. Due to his inability to communicate, he had no friends, could barely communicate with his family, and members of his community assumed that he was stupid. And yet, from spending only a few minutes with him, we could see that behind his communication impairment, Ling had a personality that was trapped, but people around him could not see past his inability to speak clearly.

Ling's parents loved him dearly, but they were at a loss as to what to do. When asked about their wish for Ling's future, they said "We want him to go to school, but the teachers won't let him join in; they all think he's stupid."

My colleagues at CABDICO told me that Cambodia did not have any university trained speech therapists. Learning of the lack of speech therapists, I was angry and confused. The systems I had learned about in university that were supposedly addressing the needs of the world's poorest people, had failed Ling and many more like him. How could there be not a single speech therapist? Not one! My anger turned to determination. I simply could not afford not to act. What if someone locally could provide basic speech therapy? What if we could improve his speech and prove that perhaps he isn't stupid? 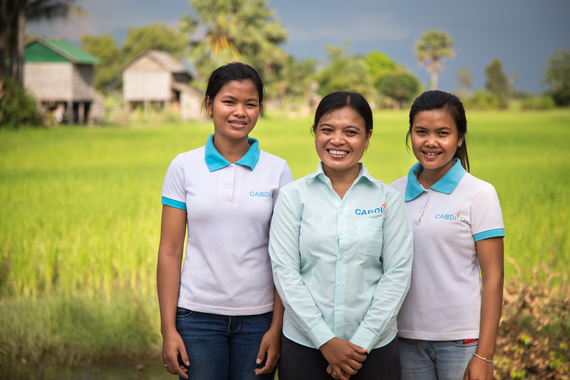 We decided to train Phearom, a Cambodian woman who works with CABDICO, in basic speech therapy techniques. Phearom loves children with disabilities and works tirelessly in often oppressive conditions to help children like Ling live more independent lives, so we decided she would be the best person for the job. As part of her training, Phearom would go out to Ling's house and work with him. Bit by bit, word by word, Ling's communication improved to the point that he could string sentences together. Not only that, Phearom encouraged the teachers at Ling's school to be more patient with him. She believed that through quiet advocacy, she could encourage them to include him in the classroom.

All our hard work paid off. At the age of 12, Ling started going to school for the first time. Now, he's not just participating, he's excelling. He is coming second in his class. Due to speech therapy, Ling also quickly became popular among his circle of peers. From once living in isolation, unable to communicate with those around him, Ling now jokes that he has "too many friends".

The story of Ling taught me that no matter how difficult it might be for some children to express themselves, belong and go to school, nothing is impossible. We can make it possible for children like Ling to go to school and thrive. 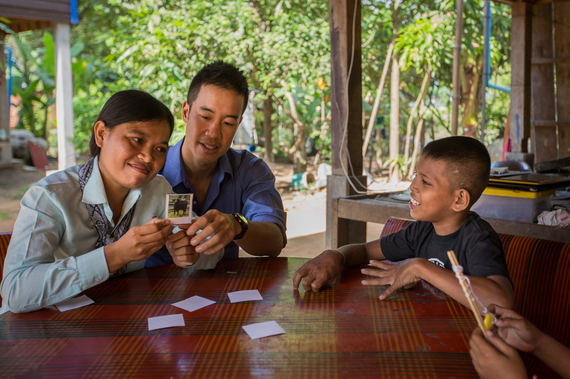 After learning about the desperate need for speech therapy in Cambodia, I worked with CABDICO to start OIC: The Cambodia Project, a project that works to establish speech therapy as a profession in Cambodia. The "project" part of our name references that we are a project of our parent organisation, CABDICO. Cambodia already has over 3,500 nonprofit organisations, it doesn't need another foreigner to come in and start another one. The other part of our name, OIC, rather than being a boring acronym, refers to that moment when something that was not clear is understood. "Oh, I see," you would say. We will bring these moments to children like Ling across Cambodia through achieving our goal: universally accessible, locally led speech therapy. We have a systematic, infrastructure approach that prioritises long term impact over short term results. Our project will deliver outputs at promised times, because we do not want to keep asking for funding year after year and have Cambodia to rely on us forever.

Countries like Cambodia, as they approach middle income status, are receiving less and less funding in the aid sector every year. At some stage, Cambodia needs to be able to care for its own.

Gandhi once said that "the true measure of any society can be found in how it treats its most vulnerable members". Wouldn't it be great if we could start working with the most vulnerable people, those who the system has been left behind? This is a world worth working towards.

Weh Yeoh is the founder and managing director of OIC: The Cambodia Project, which aims to establish speech therapy in Cambodia for those with communication and swallowing disabilities. www.oiccambodia.org