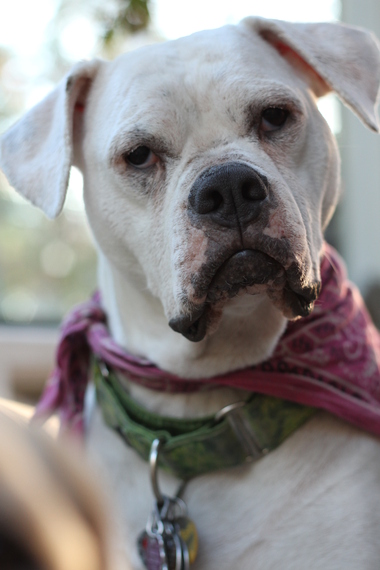 We began our commitment to dog adoption with a happen-chance request to adopt a young pit bull from our neighborhood whose family couldn't keep him. Our lab mix and we fell in love with him and so began our journey in understanding the vast disconnect between public opinion and the opposite reality we experienced firsthand with our own bully and in encounter after encounter with other dogs called "pits."

Sixteen years later, our Goover was left an only dog by the passing of his mate Clarise. His spirits were down and despite his advanced age and chronic Lyme disease; we thought it best to find him a friend. Our decision to visit Nevins Farm in Methuen, Massachusetts was life changing for us on so many levels. We were impressed in so many ways; by the facility, the devoted staff, so many dedicated volunteers and, of course, all of the beautiful animals being so very well cared for.

I don't really remember any of the dogs we looked at that day except for Cora (then Coral). Our dear boy had graduated into a fully fledged senior citizen with what we affectionately called "ole man butt" and he was quite fragile. I remember that none of the other dogs we introduced him to seemed tuned into his circumstance. Then there was Cora who pretended to play rough with him and let him "win". She really let him take the lead in their introduction and despite her shocking appearance and clear discomfort, showed grace and radiated genuine joy.

We learned that Cora's appearance was due to health issues resulting from abuse and neglect. The Nevins Farm staff found her tied up outside of their office building one morning. She was severely underweight, missing most of her hair, was covered in scabs and in need of long term care. I asked my husband, "are you sure this is the one?" even though I already knew. He had no hesitation and he couldn't have been more right.

We would soon learn that she had a condition that unscrupulous breeders perpetuate called Ichthyosis. Her last layer of skin would never fully form and she would always have dander. She also tested positive for Kidney disease which never has a good long-term outcome in dogs. She and we just decided to soldier on. She continued to serve as companion, nursemaid and gentle playmate to Goover. Even as she gained her strength and her health somewhat stabilized, she always defaulted to his "senior" status. She was brilliant in her own right but seemed to know he needed her. 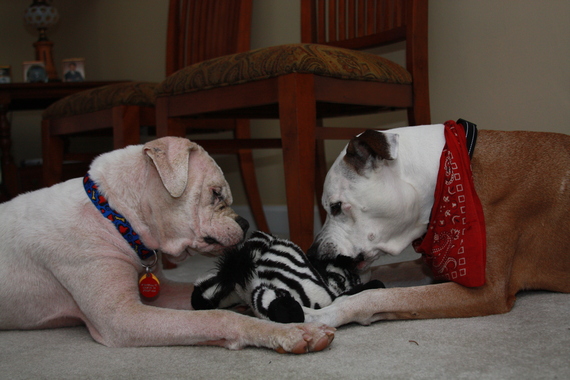 We explored every way to make her life as long and as comfortable as possible. She paid us in demonstrating perseverance, exuberance, resilience, grace under pressure and unbridled joy. We focused on our successes and really tried to back-burner the inevitable.

As is often the case we have learned, an even more impressive girl emerged within days of our senior Goover's passing. It was like Cora knew that she had served her friend well and was free to show us all what she was really made of. Suddenly, her full confidence bloomed; she was shining like a new penny.

When we went back to Nevins Farm, she made it clear only one dog was right for her, Sebastian. This slightly gangly, pure bred yellow lab resembled a family dog named Miles who she had played with recently. We really thought to ourselves, "don't you want another bully, a pup, one that is clearly harder to place?" That was a resounding NO. Every other dog was all wrong. On the September Walk for Animals that year, she got exactly what she wanted.

We took her boy home and she showed him the ropes, dazzling him with her genius and teasing him with toys mercilessly. The two thrived for a couple of the most joy filled dog lovers' years we have had the pleasure of. We and they mastered dogs in the car, dog parks and dogs at the lake. There was never a dull moment and that was just fine! 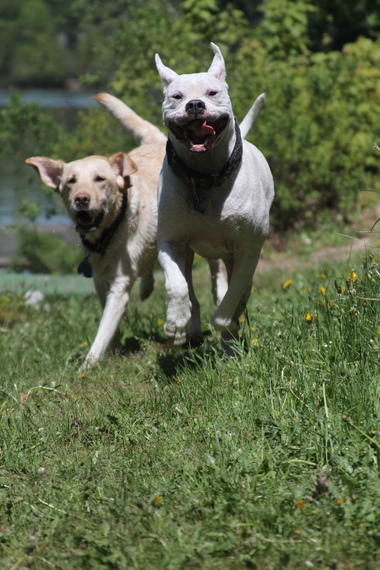 Slowly, the kidney disease just wouldn't let us win any longer. She began to decline though never failed to have good in her day. Towards the end, she spent longer outside and seemed to want to watch birds and nature more. She was a good patient; always taking whatever we thought would make her comfortable. 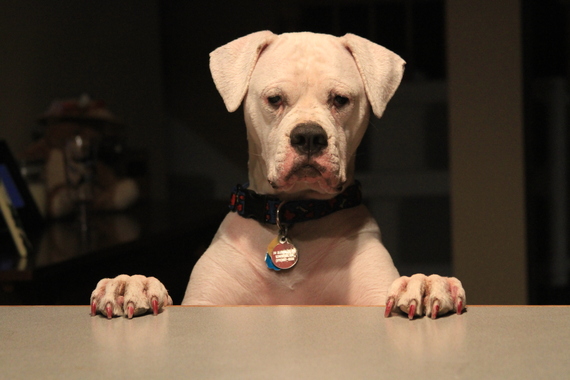 Cora lost her fight with Kidney disease the day after Christmas of 2013 and it was a huge blow. We had to admit that secretly we always thought we were going to find an answer that would buy her the full ride she deserved. Now, many tears later, we like to believe she just had one hell of a condensed version of the full ride, packed with joy, efficiently sucking all the life that she could in her short time here and with us. 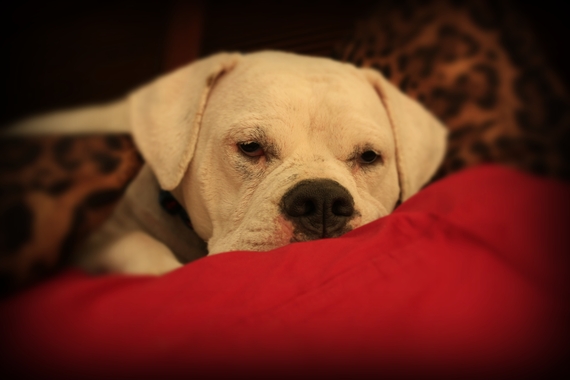 We are so grateful for the privilege of witnessing her overcoming her tough start and forging gloriously forward, an inspiration to all who knew her.