If we walked into a room full of entrepreneurially minded people and asked how many had suffered in their careers, I bet almost all would raise their hands.

It's a common phenomenon for those who are setting out without a safety net to build a business, write a book or movie script, or to invent a new product.

What entrepreneurial-minded people have most of all -- above inspiration, focus, skills, financing, brilliant ideas, etc. -- is that they never give up.

There are thousands of examples of entrepreneurship that went awry -- leaving the speculator positioned to be devastated emotionally, physically and financially. Just spend an afternoon at a library and you can read all about the people who failed repeatedly before finally experiencing success.

Even Theodore Geisel, aka Dr. Seuss, had "The Cat in the Hat" rejected 27 times before someone finally took a chance on him. Now, more than 600 million copies of his books are in print and adored.

Vera Wang tried out for the U.S. Olympic figure staking team but was rejected. Then, after working her way up to the highest editorial ranks at Vogue, she was passed over for promotion. She didn't actually start designing wedding gowns until she was 40 years old, and now she is the proud owner of a billion dollar fashion empire!

Call it cliché or call it pragmatic, but necessity truly is the mother of invention.

Just ask William Kamkwamba. Kamkwamba is from Wimbe, a small rural village in Malawi, Africa. In late 2001, while his family was battling life-threatening famine, 14-year-old Kamkwamba was forced to drop out of high school because his family could no longer afford his school's fees. Rather than accept this fate, he educated himself by borrowing books from a small community library.

Inspired by diagrams and pictures of windmill designs he saw in these books, Kamkwamba decided to build two machines. The first provided electricity to power his family's home. The second provided a constant supply of drinking and irrigation water for his family's farm.

What can we all learn from Kamkwamba's example?

Sometimes suffering creates opportunity. And, for those with a true entrepreneurial mindset and bent, suffering is an incredibly powerful catalyst for creating something new.

Kamkwamba did not have an Ivy League education nor access to venture capital. But he did have something perhaps more valuable -- an ability to accept that the world around him needed to change and the belief that he must take initiative to make that change happen.

DO WE REALLY HAVE TO SUFFER?

Entrepreneurial people of any kind drive change. Change often involves traveling uncharted territories, challenging conventional paths, and ignoring the traditional need for safety and comfort. This inherently invokes pain, suffering, and disappointments. Accepting and growing through our pain is part of growth.

Throughout history, entrepreneurs have been the drivers of change.

Entrepreneurial people envision new ways of thinking and doing that did not exist, and bring them to life: whether it is J.K. Rowling bringing to life the beloved Harry Potter and the resulting books, movies, and theme park attractions, or Henry Ford envisioning the practical Model T Ford.

In 1700s England, a self-educated carpenter and clock maker named John Harrison (1693-1776) lived in Lincolnshire. At the time mariners needed a device for solving the problem of establishing the East-West position or longitude of a ship at sea. It was considered such an important problem that the British Parliament offered financial rewards of up to £20,000 for the inventor of such a device with the 1714 Longitude Act.

Motivated by this incentive and highly skilled as a clock maker, Harrison set to work, and invented the marine chronometer. After building five chronometers and being rejected by the Longitude Act's board many times, in 1773, with the encouragement of King George III, Parliament awarded Harrison £8750 for his fifth chronometer.

The £20,000 prize was never awarded, even though Harrison's fifth chronometer, known as H5, far exceeded the Parliament's requirement. Harrison's invention revolutionized sailing and extended the possibility of safe long-distance sea travel in the 18th century. With Harrison's clock, these mariners could literally explore uncharted territories. But it took Harrison 59 years of perseverance, hard work, and overcoming disappointment to develop the H5! 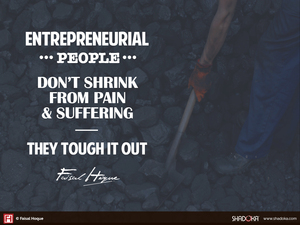 Entrepreneurial people don't shrink from pain and suffering, they tough it out. The husband-and-wife team -- Do Won Chang and Jin Sook -- behind the retail chain Forever 21 didn't always have it so easy. After moving to America from Korea in 1981, Do Won had to work three jobs at the same time to make ends meet. They opened their first clothing store in 1984. Forever 21 is now an international, 480-store empire that has over $3 billion in sales a year. The couple worked nonstop, and it paid off. Theirs is just one of many stories of prevailing over circumstances that might defeat other people.

SUFFERING TODAY FOR A BETTER TOMORROW?

A study from the UK-based business group Approved Index explored
the rate of entrepreneurship on a global scale
by calculating the percentage of the population that owns or co-owns a business in each nation. The study returned some pretty astounding results.

With a massive 28% of its people classified as self-employed (meaning they own or operate a small business) Uganda ranks #1 in the world for entrepreneurship. That's pretty remarkable for a nation that was quite recently released from the grip of dictatorship.

Falling closely behind Uganda is Vietnam -- a nation with an extensive history of socio-economic distress. Before the 1980's, the majority of the Vietnamese population was living well under the poverty line. By 2013, Vietnam had crawled its way up to the classification of a "middle income" nation. The Approved Index study reveals that 13.3% of Vietnam's population is self-employed, ranking it #5 for entrepreneurship across the globe.

Is it the rise in national income and economic prosperity that created a climate in which business owners could thrive? Or, could it be that the self-made, entrepreneurial spirit is precisely what's needed to rescue these nations from poverty?

Perhaps nations, much like people, must harness a collective sense of perseverance to rise above the socio-economic obstacles they face.

For the citizens of Uganda and Vietnam, entrepreneurship is not just a dream. It is a necessity. They are faced with the choice of either making their own opportunities where they can or resigning themselves to a life of hopeless poverty.

"To exist is to suffer. There cannot be existence without suffering."

To live is to experience physical and psychological suffering, and to strive to overcome these things. It is indisputable that we have to eat from the sweat of our brows; we have to work for what we get; we have to deserve what we want. This inherently demands effort and sacrifice. We suffer because of our desire to go beyond what we are today. In that context suffering is the step towards entrepreneurial growth which can initiate a positive force from a negative situation.

Faisal Hoque is the founder of SHADOKA and other companies. Shadoka Enables Entrepreneurship, Growth, and Social Impact. He is the author of "Everything Connects: How to Transform and Lead in the Age of Creativity, Innovation and Sustainability" (McGraw Hill, Spring 2014). Follow him on Twitter @faisal_hoque.

Entrepreneur, Author | Founder of SHADOKA and other companies. Author of "Everything Connects”, “Survive to Thrive”, and Others.