With The Onion editorial staff leaving their decade-long home in New York City, so with them goes a piece of comedy history.

The satirical newspaper's writers' room conference table is now for sale on Craigslist. The asking price? $10,000, or best offer.

"This table is the site where tens of thousands of millions of ideas have been conceived, developed, painfully delivered, raised, nurtured and chucked into the world," the ad reads. "Majestic comedic charisma may be embedded into the fibrous tissue that forms this otherwise completely standard piece."

What is most likely a sad day for The Onion could also be one (rich) diehard fan's lucky opportunity to own a comedic artifact, if not just a really interesting piece of office furniture. Every story they've put out in the last 10 years, including the now infamous 9/11 issue, has been worked out at this table, not to mention all the noteworthy figures that have enjoyed whiskey around it on Friday nights.

And if there was any doubt as to where the proceeds will be allocated, one Onion editor offered the definitive answer on Twitter.

The sale comes ahead of a temporary move for the NYC-based staff before a permanent move to Chicago later this year when the company consolidates its entire staff there. The editorial staff has worked in SoHo since 2001 and has to choose between staying in New York or leaving their positions. Current Editor-in-Chief Joe Randazzo has already decided not to go. 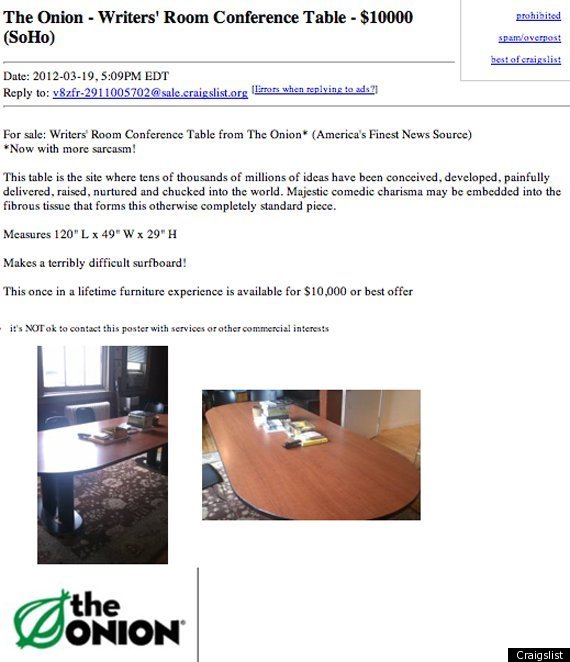