"How do you know when you've found The One?"

Either way, when it comes to decisions concerning our love lives, we're often looking for some sort of sign (or reassurance) that we're on the right track.

Knowing this, PlentyOfFish surveyed more than 1100 former PlentyOfFish users who married someone they met on the site to gain insight into the specific behavior - both online and offline, that means you're headed for a relationship of the serious variety.

We decided to ask our married couples about the content of the first message their partner sent them online, and the answers were pretty surprising. In fact, 35% of married women actually contacted their current partner first, serving as inspiration for women who are still on the fence when it comes to making the first move.

The majority of respondents who received the first message from their partner reported them mentioning something specific from their profile that caught their eye.

The second most common message? An underwhelming, "Hey, what's up?", basically confirming that yes, your future husband may be lost in the sea of generic messages that is your inbox. At least give him until the second or third message to pique your interest before you write him off completely.

Almost 1 in 5 men reported falling in love with their current partner at first sight, and were smitten faster than their female counterparts.

Since the vast majority of the married respondents also believed in soulmates, we wanted to know what it was that made someone one. It turns out, the most important indicators were sharing similar beliefs, considering your partner your best friend, and sharing a connection you can't explain. 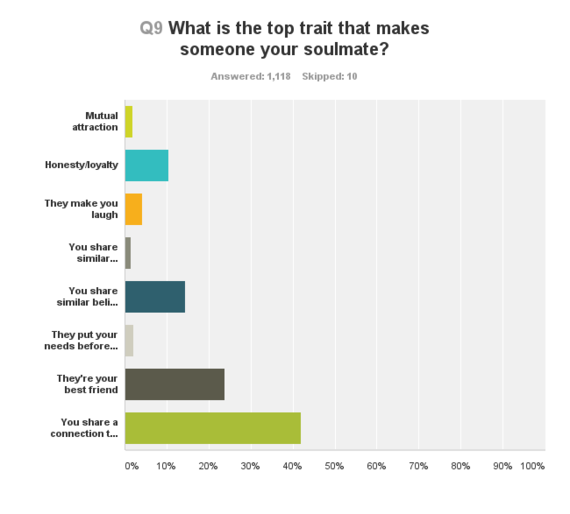 In the end, the most important underlying point from the findings is that singles should stick with it when it comes to dating. All of our couples who met on PlentyOfFish were once going through the ups and downs of looking for love as well.

Some people know immediately when they've found the right person, and for others, it takes a while. Open your mind and look past an underwhelming first message, or a preconceived "type" of person you want to date - you may surprise yourself!