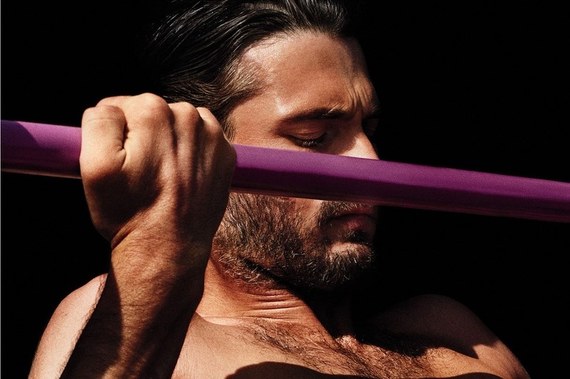 Read more: The Real-Life Diet of a Pro Bodybuilder Who Swears by Chipotle

How It Works
Pick one move from each of these categories. Then do 2 sets of 12 reps. Change up the moves but repeat the plan 3 or 4 times a week. For cardio extra credit, see the add-ons below.

Hang from a bar with palms facing away from you, arms straight, knees bent so feet don't touch floor. Bend elbows, pulling chest toward bar. Slowly lower yourself to start.

Set a heavy barbell on the floor in front of you. Push hips back as you bend forward, grabbing the bar with hands more than shoulder-width apart, palms facing body. Keep back straight as you stand up, lifting the bar and thrusting hips forward. Slowly lower bar to start.

Stand on your right leg, left foot resting on a bench or box behind you, and hold a heavy dumbbell in each hand. Bend right knee, lowering body until left knee hovers just above the ground. Straighten right leg, returning to start. Complete all the reps on one side before switching legs.

The Ultimate: Farmer's Walk Stand up straight holding a heavy dumbbell in each hand, palms facing body. Maintain your posture as you walk 20 meters. Turn, repeat, returning to start.

On a rowing machine, row as many meters as possible in 5 minutes. With each workout, attempt to increase that distance by one percent.