By: Carrie Dennis and Kevin Alexander 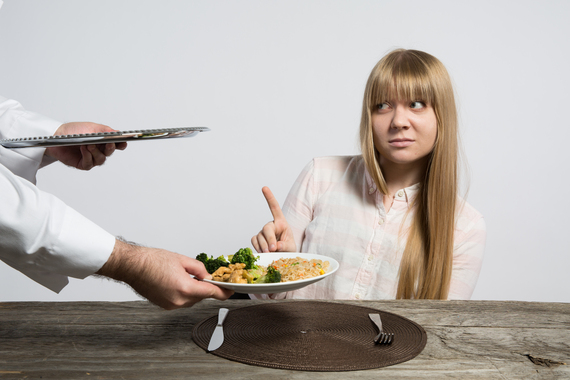 Few things are as frustrating as ordering a dope dish at a restaurant, but being disappointed with what arrives. What do you do? What do you say? Do you send it back and risk being that guy? Well, it turns out you totally can send your food back to the kitchen without inviting the ire of the entire waitstaff, so long as the situation warrants it (although if you do any of these 16 other things, it's pretty much guaranteed they'll dislike you). Check the appropriate ones out below.

More: The Most Overpriced Items on the Menu, According to Chefs

1. Your steak is improperly prepared.

3. Your server looks like your ex-lover Brad who treated you poorly.

4. Your food is undercooked.

5. You ordered something you didn't realize you were allergic to.

6. The server keeps recommending a salad even though you already told him that work is really stressful right now, and that's why you've been gaining weight.

7. It's mad spicy but the menu didn't say it would be.

11. Parts of the dish seem like they were microwaved while others are cold.

12. The server makes it seem like you are crazy when you ask him why he changed his phone's password and keeps deleting texts from Lauren.

13. It's the appetizer portion when you asked for the entree.

14. The server refuses to even look you in the eye when you ask him where he was the other night even though you both already know that he was at Lauren's apartment because you can smell the stupid Chloe perfume she wears, and it's definitely not like he was at the gym for four hours because, no offense, but you've seen him with his shirt off lately, and let's just say his lightweight crew years are a distant memory.

15. JUST GIVE IT UP, BRAD. LAUREN WILL NEVER REALLY DATE YOU, OKAY? SHE'S MOVING TO AUSTIN TO DO PR FOR LEGALZOOM.

Table Manners Around the World

Few things are as frustrating as ordering a dope dish at a restaurant, but being disappointed with what arrives. What do you do? What do you say? Do you send it back and risk being that guy?