In his long career as a black gay journalist, Rod McCullom is known for his reporting on science and health (including HIV). As such, he says he has often been the only person of color in the newsroom or production studio -- and almost always the only gay black man.

Whether in his mainstream media work or as the creator of the early and ongoing Rod 2.0 blog, he's covered vital topics and carved out a bold, prominent place online, in print and as a multimedia producer.

This fall, McCullom embarked on the next step of his journey as a fellow in the Knight Science Journalism Program at the Massachusetts Institute of Technology (MIT), where he's focusing on writing a book on the search for an HIV vaccine. I appreciated the opportunity to talk to Rod -- one of the fabulous writers I've had the pleasure of working with at TheBody.com -- as he took time to reflect on his path as he prepared to relocate to Cambridge. 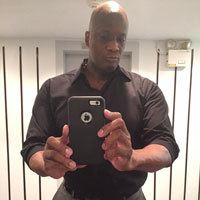 Tell us a little more about the Knight Science Journalism Program you're doing this year.

MIT's program, which is called the Knight Science Journalism Program, focuses specifically on science journalists. So every year -- and they've been doing this, they recruit 10 to 12 journalists to come to MIT to take courses. You take courses at MIT and Harvard. Some of us work on research projects.

I am going to MIT, Knight Science Journalism, on my HIV/AIDS reporting platform. Someone at MIT told me that this would be the first time they had a journalist who specifically reported on HIV. I mean, obviously I report on more than that. But my application focused on HIV.

Many of our readers may be familiar with your website, Rod 2.0. I wanted to back up and get into the Rod 1.0. Tell us a little bit about your background and how you got started. And how did you come to focus on HIV as a journalist?

It's been a circuitous journey. I started in journalism in college at the University of Chicago writing for this alternative weekly, called the Chicago Reader, which is sort of like the Village Voice or the LA Weekly. I also did some freelancing for the Windy City Times, which is the gay news weekly.

And then during college, I had an internship at the LA Times, which was very interesting. You learn a lot, but I experienced so much racism and just hostility, being one of only a handful of black reporters. I was a young, black 20-year-old gay guy who was on the business desk at the LA Times. And this was in 1991 or so. So you can imagine how that was.

Related:
Rod McCullom on HIV and the Movement for Black Lives

I'm openly gay. I have been ever since high school. So I've brought this with me to everywhere I've been.

After, I didn't think the newspaper business was for me. So I kept on freelancing for different magazines. I eventually landed in TV news -- we're talking the mid-'90s or so. I worked in TV news in Chicago, for the FOX station and for the NBC station. Then I started working for the ABC Network, and then other news properties. Then I went to New York.

Along the way I actually started reporting on pharmaceuticals. Of course, this was during the height of the AIDS scare. It was the early '90s. No one had heard anything. The term antiretroviral was like a quest by some scientists. This was during the age of AZT.

What was it like to start reporting on pharmaceuticals before there was effective antiretroviral treatment for HIV?

At that time, so many of my friends were dying. I lost so many of my friends. You'd go to the club and you'd hang out, and then two weeks later you would hear that they were dead or they were in the hospital. So at that time I did a lot of reporting around pharmacies. For some reason, I was more attracted to the medical and pharmaceutical aspects of HIV. That's what I was doing actually when I moved to the LA Times, and was on the business desk. And then later on, once I started getting in TV news, I became the "go-to guy" on medicine and science and AIDS and cancer, those types of things.

Once I stopped working full-time in TV news in the late 2000s, then I started going back into print. I started writing for The Advocate and others. I was reporting on many different things, but one of my main focal areas always has been the [HIV] epidemic and trying to report more on the science behind it -- and also the global aspect and, of course, people of color in the U.S.

Your focus is HIV and the black diaspora. What are the main underreported or misreported stories? What do you think is not getting enough coverage, or actually is getting covered wrong?

We're always hearing these terms -- black people are only 14 percent of the U.S. population, but almost half of all new HIV infections. So sometimes we hear these statistics bandied about, and we accept them as fact and don't understand why.

We need to have more clarity around why health disparities exist. And it's not just HIV/AIDS -- it's issues affecting women and it's issues affecting youth, especially people of color, be it cancer, diabetes, smoking. So that's one thing I've been trying to do in my work, be it at TheBody.com, or at The Atlantic, or Scientific American -- any of these places, explaining why these disparities exist.

A lot of journalists are afraid or unsure about how to report on new advances, especially when it comes to science. Every month there's some new study that says this, or some new study says that.

When you were coming up, did you have particular mentors, people who influenced your work? And how did they do so? And what advice are you giving to a new generation, particularly to young gay black men who are writers?

Unfortunately, when I grew up -- I mean, I grew up in this industry -- there were not many openly black gay men in journalism. There were some, mostly on the entertainment side. So I did not have mentors who were black gay men. I did have several black lesbians who were my early mentors. Two were actually news directors at different shows I've worked with.

What I've done over the years is I've had mentors from different backgrounds. When I was with the LA Times, the office manager was a straight black man. I learned a lot from him. Also, I used to freelance at NPR. Everywhere I've gone, I've had unofficial and official mentors.

One thing that I did learn when I was young: When you're black you have to work twice as hard, and often you get half the respect. So that means I had to come in to work every day early; I had to be the last to leave. As a journalist, and as a reporter I always had to double-check my work. I learned doing that when I was young.

If you make just a casual mistake, so many people will be attacking you. The first thing they're going to say is you're not qualified. And if you made a simple mistake on the date, for example, how can you be trusted with anything else?

But, if you were a white man and you make just some egregious mistake, in your journalism or in your reporting, oh, it's no big deal. "He's done so much good work before. He just had a bad day. It's just data. Anyone can make that mistake."

Unfortunately, it was drilled into us. So many of us became over-performers. So sometimes when you do see a black person in a traditionally all-white environment they're usually an over-performer. You know, for instance, Barack Obama, or Ta-Nehisi Coates, or Teju Cole.

The new generation, they're fighting back against that. And that's one thing I really do appreciate. So I'm not passing on that advice. But I do make sure when I talk to youth, when I talk to other journalists who are younger, who are trying to come up, I do let them know that racism still is real. I've had to fight homophobia and racism at the same time. It is difficult.

There has been so much homophobia and so much racism, there just weren't many other faces when I was coming up. So now we're finally having some. So that's one thing I do recommend.

The other thing that I do tell other journalists -- youth, and even ones my age -- is to specialize, is to find something to specialize in, because once you have a specialty that makes you more valuable.

Many times in the industry there's this subtle racism that suggests that people of color are only qualified to write on themselves -- and not on serious issues. Or if we do have people of color who are health writers or medical journalists, they're not really qualified to go overseas to an International AIDS Conference. You know what I'm saying?

I tell many younger black writers to try to have some type of subspecialty that's science- or technology-related. For instance, a lot of black writers I've met write on entertainment. OK, that's great. But unfortunately when the big stories come, their entertainment stories are usually not going to be on the front page, or on the top of the Web page.

But if they're also reporting on the business end, or the technology end, or the science end also, then that gives them more play. So when Beyoncé releases a new album overnight, OK, that's a big deal. But if you look at The New York Times, their coverage would be on how she revolutionized the marketing industry, or the technology end of that, or the social media end of that. And quite often black reporters are not called to do the stories on science or technology.

You've had other journalism fellowships and opportunities. Are these programs helping to diversify newsrooms and the range of stories that are getting out there?

I've been on a lot of these fellowships. This is my first full-year one. But I had a fellowship from the Ford Foundation, and going to different countries, from Ethiopia, to Australia, to wherever -- Spain -- mostly reporting on HIV/AIDS.

So when I've been on a lot of these fellowships -- especially the international ones -- it's interesting being the only one in the room. And of course, whenever I've gone to sub-Saharan Africa, of course, there are other black journalists who are from African countries, such as Nigeria, or South Africa, or Zimbabwe. Of course, there are other black men who are reporters and journalists from these countries.

People have noted this over the years. I've seen it all my life. It doesn't make me comfortable. I really look forward to getting to the point where I'm not the only one.

I think what happens, unfortunately, is it just dissuades so many people from going into a field. Women and people of color, especially black people, are not encouraged to are not encouraged to report or write on technical fields or scientific fields. Or they see these programs -- you know, like MIT's Knight Science Journalism -- and they never see any black faces. So they think, "Oh, what's the point of applying?"

Unfortunately, the bar is still difficult for us to achieve, to get in there. But we have to keep pushing, from the inside and from the outside.

JD Davids is the managing editor for TheBody.com and TheBodyPRO.com.