Despite criticism, open workspaces are still the smartest solution.

Ever since companies began tearing down walls to replace private offices with open space, there have been plenty of naysayers, and the latest is Maria Konnikova in The New Yorker. Earlier this month, she declared that "the open office undermines the very things that it was designed to achieve" (better communication and idea flow). Pointing to old perceptions -- noise and lack of privacy -- she calls the open office a "trap" that "may be ingraining a cycle of underperformance." Yet, in her criticism, Konnikova overlooks the greatest value of the open office -- it's dramatically more sustainable.

By "sustainable," I mean that open offices are at once economically, environmentally and socially smarter. First, they're significantly more efficient with space. For most offices the maximum utilization rate throughout the day is only about 48 percent. In other words, companies build, lease, furnish, heat, cool and light more than twice as much space as they need at any given time. As a result, the federal government is reducing the average area per person in its facilities from about 250 square feet to 150 -- a 60 percent cut. Some of that savings will come from telecommuting and other flexible policies, but it also will rely on a different space strategy. My firm has found that we can improve the area per person 20-35 percent simply by converting to open offices. For a large company, this can save millions in lease and utility costs every year. 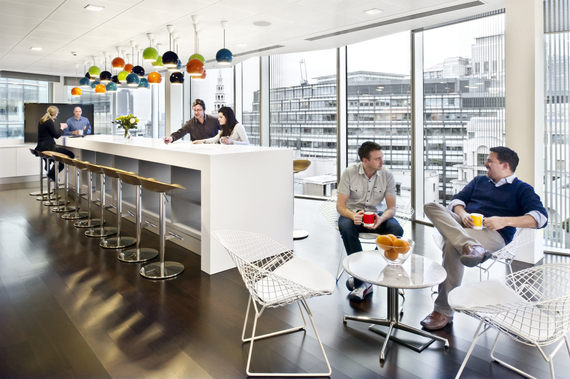 Cutting area also considerably slashes energy and emissions. If every office building in America shrank by just 10 percent, greenhouse gases would decline by the equivalent of taking seven million cars off the road. The Environmental Protection Agency recognizes open work plans as a standard strategy for saving energy because, even without reducing the area of a building, fewer partitions make it easier to distribute artificial light and mechanical air at lower quantities with less equipment. But open space also allows natural light and outside air to spread more easily, lowering dependence on electrical systems. Many smart office buildings require no artificial lighting at all during the day, and this simply cannot be achieved with too many walls.

Beyond saving energy and money, the psychological effect of bringing in more of the outdoors is possibly the single biggest benefit of open offices. Ten percent of absences can be attributed to having no view of the outside, while daylight, fresh air and positive views can relieve stress, fatigue, headaches and other ailments. Research shows that in spaces with positive views of the outdoors, office employees perform 10-25 percent better on tests of mental aptitude and memory recall, while cubicles with higher partitions lead to lower performance. In its new headquarters, healthcare giant GSK found that moving to open workspace improved decision-making speed by 45 percent.

What of noise and lack of privacy, Konnikova's primary complaints? Actually, if designed well, the acoustics of open offices can be more comfortable than traditional offices. Analysis shows that low partitions with highly absorbent materials can reduce noise transmission 24 percent more than full-height drywall partitions, and suspended acoustical "clouds," which absorb sound on both sides, can reduce reverberation time by half with much less area than a continuous ceiling. The General Services Administration has found that taller partitions in cubicles may provide more visual privacy but not necessarily more aural privacy, and in fact the perception of greater isolation can encourage talking louder, which actually diminishes privacy and creates more distraction.

"Physical barriers have been closely linked to psychological privacy," Konnikova notes, citing a 34-year-old study that predates most open offices and the entire revolution in personal and mobile computing, which has liberated the modern office worker. No longer chained to their desks, people can work anywhere at any time, inside and outside the office. A typical goal for the contemporary workplace is a one-to-one ratio between seat counts for individual versus collaborative work (meetings, etc.). So there are plenty of places to slip away for private tasks or quiet time, as well as much more opportunity for shared events and casual, unplanned interaction, which can instill a more tangible sense of community.

Fourteen years ago in The New Yorker itself, Malcolm Gladwell proclaimed that in open offices people now can get "all the social support they need-all the serendipitous interactions that serve to make them happy and productive." This might be why GSK found that within two weeks of its move, most employees said they'd never go back to cellular offices. Hard to argue with that.

Lance Hosey is Chief Sustainability Officer with the global design leader RTKL and a member of the AIA Committee on the Environment. His latest book is The Shape of Green: Aesthetics, Ecology, and Design.