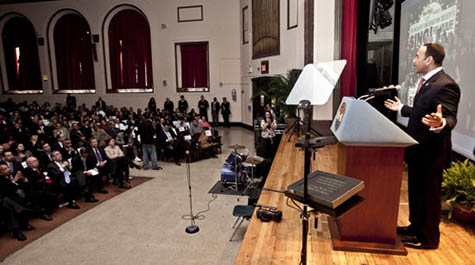 This week, Bronx Borough President Ruben Diaz Jr. gave his second annual "State of the Borough" address, outlining his plans for the future of the Bronx. The full text of that speech can be read here.

Since I was first elected to the office of Bronx Borough President in 2009, I have operated on the principle that we are "One Bronx," a place where the good things that happen in our neighborhoods resonate across the borough and the things that harm one community harm us all.

The spirit of the people of the Bronx--"One Bronx"--was made loud and clear in recent weeks, when Bronxites from all corners of this borough stood up to defend their hometown after the television show American Idol went out of its way to portray the Bronx as the poster child for urban decay.

We know the truth. Over the past 25 years, dedicated Bronxites of all stripes have worked hard to make our borough the best it can be. We have stood together, as "One Bronx," to push back against those who would denigrate the Bronx. We have fought against the negative stereotypes and the poor image of the Bronx. We are showing the world that the Bronx is a place not of disappointment, but one of opportunity.

And that opportunity is all around us. In the past year the Bronx Overall Economic Development Corporation, which serves as the economic development arm of my office, has pushed tens of millions of dollars into the borough's economy, through loans to businesses of all sizes, to both new businesses just entering the Bronx to those who have stayed with us for decades. In fact, in the last year alone, the BOEDC provided assistance, financial or otherwise, to almost 700 Bronx businesses.

The Bronx is attracting visitors from all over the world. More than two million people visited the Bronx Zoo last year, with another 700,000 visiting the botanical garden. Thousands of cyclists participated in the "Tour de Bronx," and our fine restaurants on Arthur Avenue, City Island and in neighborhoods across the borough draw foodies from all over the region.

These statistics are just part of the story, and show just how much room for positive growth there is in our borough. During the next year my office, together with elected officials and community leaders from all over the Bronx, will put forward a clear vision to build on these strengths.

We will work to bring a first-class hotel to the Bronx, which will serve as a tourism hub for the entire Bronx. We will put forward plans for the responsible redevelopment of the Kingsbridge Armory, and urge the mayor to work with us to make those plans a reality. We will work to bring new businesses to the Bronx, and make sure that those who want to stay here--especially the Hunts Point Produce Market--have every opportunity to do so. And we will continue to lead the nation in driving the "green" economy.

In our economy, in our schools, in the environment, and in many other important areas the Bronx represents a place of great ability and opportunity. Together, as "One Bronx," we can and will stand up to those who see only the negative in our borough while putting forward the plans for the positive redevelopment of our home.

There are success stories all around us. But the best is yet to come. Please join me on this journey...our journey to a thriving "One Bronx."