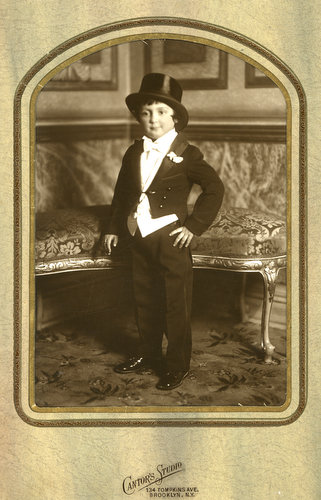 In the historic aftermath of the American public voting to affirm marriage equality, it's clear that the turnaround in majority public opinion comes in large part from ever-increasing LGBT visibility. Just about everyone knows someone who is gay: next-door neighbors, aunties, cousins and celebrities, all making gay folks real and human.

I'm remembering prior eras when the culture's pervasive homophobia meant lying low for queer folks, and having to hide in turn reinforced prejudice. From 1959, when I was 8, through my sophomore year of high school, I went to Camp Birch Ridge, owned and directed by two women. We campers called them "Skipper" and "Hendy," their camp nicknames. "Hendy" was short for "Mrs. Henderson." Her hair was coiffed in soft waves, and she wore cotton culottes to mid-calf, pastel cotton shirts with Peter Pan collars, cotton anklets and sturdy Oxford shoes. Skipper had a strong hook nose and very short, dark hair that she wore slicked straight back with pomade, which left her broad forehead bare, and she always wore men's khaki pants, the same cotton shirts with Peter Pan collars as Hendy (but only in white), and men's work boots.

Hendy planned the menu, oversaw the kitchen and taught arts and crafts. She was a school nurse, so if you got banged up, you came to her for mercurochrome and Band-Aids. Skipper did all the hauling with the tractor, including emptying the portable toilets. She led the sing-alongs at the campfires, directed the daily flag-raising ceremony, barked out camper names at post office call and did the dreaded inspections of our tents for neatness.

Wasn't it obvious, at least to the parents of the campers, that this was a lesbian couple? But, of course, there was a cover story. Hendy had been married and had grown children. Perhaps her husband had died, I don't remember, but her heterosexuality was sealed with her status as "Mrs." Skipper's story was repeated by some counselor in a funereal whisper every year: She'd had a beau before World War II, and the gallant lad went off to battle and was shot dead. Thank goodness she had hooked up with Mrs. Henderson for companionship.

Their relationship was certainly volatile enough. Skipper used to scowl at Hendy during campfires as if they were in the midst of an interrupted fight, and sometimes she would storm off, leaving us mid-song, marshmallows flaming on sticks. No one said "lover's quarrel," but perhaps, in some unconscious way, we all knew.

Camp Birch Ridge was actually Hendy and Skipper's year-round home. It was a beautiful piece of land in northern New Jersey, with woods and orchards and a lake big enough to canoe on. They lived in a huge, white farmhouse. Part of the house was used by the camp: a screened porch where we ate. There was an ironclad rule about the private areas: They were off-limits, forbidden for campers to ever enter. Later, I wondered: Did they not want us campers to see a shared bedroom, or pictures of the two of them, arms around each other's shoulders, framed in the living room? God, I hope they had a sexual life, and that their passion was not killed by the secrecy, by the danger of their work involving children making it even more critical to stay hidden as lesbians.

In 1971, after I came out at 19, my mother revealed to me her astounding secret: For two years she'd been lovers with another married woman, when I was 2 to 4 years old. Both women had been given psychiatric treatment to "cure" them, leading to their breakup and my mother's suicidal anguish. It had been the 1950s, after all, and homosexuality was seen as a disease. Luckily, Mom survived to come out a month after I did, and to regain a joyful life.

I remembered Mom's lover Marian. She appeared for brief visits over the years of my childhood and then vanished for months at a time. There was a brittle awkwardness between her and my mother, as if something was frozen between them. Of course, I had no idea that they had once been lovers, or that Marian was the focus of my mother's grief. I only felt the effects of the unnamed homophobia shattering my childhood.

But Mom's revelation got me to pondering: Who, in addition to my own mother, were the other lesbians in my growing-up years, closeted and hidden? Some I had already guessed at, among those whom I must never have recognized. There was my creative writing teacher in my senior year of high school -- no makeup, short hair, and she used to chug off in her VW Bug at day's end with another short-haired English teacher. But Hendy and Skipper were foremost in my memory.

Over the years I've had a recurring fantasy: I return to Birch Ridge, triumphantly declaring myself a lesbian sister-daughter to Skipper and Hendy. I wonder what they thought of themselves, what names they used, if any, for their relationship? Did the women's and the gay liberation movements affect their sense of themselves? Did they have any lesbian or gay male friends? Sometimes in my fantasy they welcome me with open arms; other times I imagine that they would be rejecting, uncomfortable with such naming.

My daydream of returning is for a homecoming to a community of elder kin who welcome me back where I belong. Embedded in my fantasy is also this: the desire to bring to life my museum of lost lesbians, my lesbian foremothers. It is as if the immobile figures in my personal wax museum become animated and regain their voices, telling me the truth of all that was unspoken. And I want to listen closely, because these are my people, wedded to me for better and worse: the dykes of my childhood.