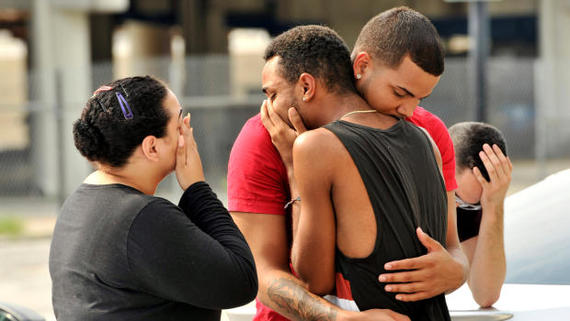 I didn't want to write about the Orlando shooting. I just moved my home and business across two states and I'm tired. I'm also tired of mass shootings and Congress doing nothing to prevent the next one. I'm tired of powerful people twisting facts and words to suit their interests, and millions of us going along. I'm tired of repeating myself. But here's the question that compels me to write anyway:

Would Mateen still have committed this crime if there had been no "radical Islam," and no ISIS to pledge allegiance to?

So far, everything points to "yes." His motive was more likely hatred of LGBT people, not the American way of life or Americans - after all, he was one. He was known for making anti-LGBT comments, and cased both The Pulse nightclub and Disney Springs during Gay Days a week before committing his crime. His motive was likely self-hatred - he was a regular at The Pulse, was active on gay dating apps, hit on a male friend and had a homophobic father his ex-wife said he felt pressure to please. Mateen's pledge of allegiance to ISIS (and other assorted terrorist groups) on 911 was likely an afterthought, according to her and his father. So here's the next two questions:

Other questions: What would have been different if Mateen had been held accountable for his bigoted, homophobic comments at his job - as a security officer? What would have been different if there had been mental health services available (or required) to support this man who was violent, volatile, unhappy and lonely? Or systems to identify him as a threat and keep him away from people he could harm?

Answering these questions can get us to causes and therefore solutions. These questions matter because this is not just "one deranged individual." To believe that is to assume nothing could have been done to prevent this tragedy. To believe that is to claim powerlessness and say that context has no effect on individuals' behavior. We are not powerless, and people don't live in a vacuum. Understanding why and how Mateen committed his crime equips us to prevent the next one. It empowers us to take responsibility for our shared future.

Donald Trump and those of his ilk - like Judge Persky who sentenced rapist Brock Tuner to a laughable six months' jail time - decry what they call "political correctness" as the real problem, and a barrier to solutions. After Orlando, Trump said "the current politically correct response cripples our ability to talk and to think and act clearly." That's not true. "Political correctness" is about putting American values into action: respecting people's dignity and rights, speaking fairly and respectfully, ensuring everyone's physical safety, and judging people by the content of their character and their actions, not by their group membership.

Want clarity? Here it is: terrorism is broadly defined as "the use of violence and intimidation in the pursuit of political aims." The FBI definition adds that terrorist acts "appear to be intended to intimidate or coerce a civilian population." According to these definitions, shooting a group of churchgoers in Charleston is racial terrorism, rape is gender terrorism, and shooting 49 people in an LGBT nightclub is LGBT terrorism. Perhaps even the over 100 anti-LGBT bills introduced or pending in 22 states since marriage equality became the law of the land could be called terrorism. They certainly are "dangerous to human life" as witnessed last Sunday morning, since they provided the lush backdrop for Mateen's performance on our national stage.

"Political correctness" is also about creating correct policies. It's about ensuring justice and fairness in public life along with prosperity and safety. We don't have to choose. It may not be clear to Trump, but it is clear. It's messy in the details and implementation - just like social institutions, democracy, and anything involving lots of humans. It does not provide easy answers to demagogues and small minds who crave simplicity over American values.

Your fear of what might happen is not equal to my fear of what has happened, and what is happening. We must stop treating them as the same. To continue to do so not only reinforces inequities, it holds our democracy hostage and threatens innocent lives. And isn't protecting innocent lives and judging people based on their character and actions what America is supposed to be about?