"I have a dream"
--Martin Luther King Jr.

"I should have been a great many things"
--Louisa May Alcott 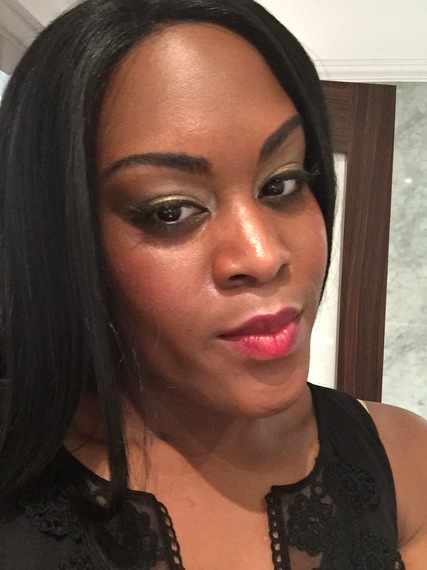 I love the Oscars. Yes, the telecast is long and superficial, but the speeches (occasionally) remind us that movies are our dreams.

Actors talk about being transformed--both onscreen and in life--by the characters they play. (Hilary Swank's acceptance speech for playing Brandon Teena--a transgender man who was brutally murdered--comes to mind, after which Swank became a spokesperson for the queer youth organization, The Hetrick-Martin Institute). And sometimes, actors whose bodies, or skin colors, or identities, we don't often see in the limelight, take the stage. (Watch Hattie McDaniels accept the first Oscar ever won by a person of color--in 1939!--presented by actress Fay Bainter, who described the award as,"more than just a plaque of gold. It opens the doors of this room, moves back the walls, and enables us to embrace the whole of America - an America that we love, an America that almost alone in the world today, recognizes and pays tribute to those who give her their best, regardless of creed, race, or color," followed by McDaniels herself calling it "a beacon for anything that I may be able to do in the future.")

If movies are our collective dreams, they should inspire us to have the greatest American dream of all: the opportunity to be a great many things.

This is why so many of us are disheartened that, once again, the faces celebrated at the Oscars are all white; the nominated directors are all men (and Todd Haynes, the gay director of one of the year's best films, Carol, which makes a great case for movies about women, is not one of them); and the passionate cries for diversity on screen over the years (e.g., here, here, here, and here) have not shaken Hollywood up enough to create or to cast more roles for actors who are not straight white men.

So I've chosen to celebrate what should be rather than complain about what is--77 years after Hattie McDaniels' historic win. And to that end I commissioned a speech from the performer who moved me the most in 2015: Mya Taylor, from the critically acclaimed indie film, Tangerine.

Tangerine is an off-beat comedy that follows two transgender sex workers as they work a downtrodden Los Angeles intersection on Christmas Eve. It is a collaboration of director Sean Baker, and the two leading trans actresses, Kitana Kiki Rodriguez and Ms. Taylor, whom Mr. Baker met at an LGBT center near the film's location. Mr. Baker was inspired to make a movie about this part of L.A., which is very different from the one we often see in movies. He says,"I thought there must be some incredible stories that take place on that corner." And he was right.

The palpable chemistry between the leads at once references and transcends classic buddy films, transporting us beyond the limitations of gender or race. As Alexandra, Taylor effectively conveys a fierce survivor who is driven by her dreams. We get a glimpse of the life she could be living as she sings "Toyland" at a local club, bathed in a soft, glamorous, light that contrasts the gritty, sweaty, tangerine, hue of the streets she calls home. Scenes like this are what I love most about movies: the chance to be embodied by people whose stories are unsung. 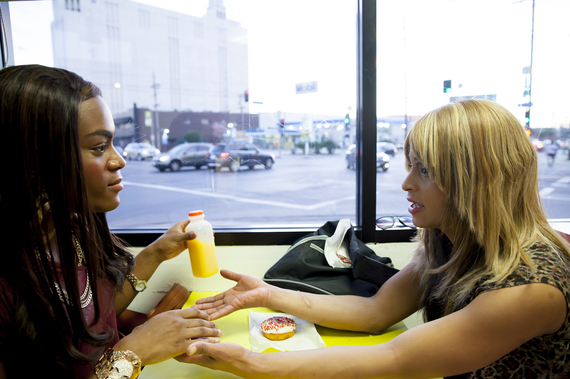 At the same time I love seeing the same actors get to play a variety of stories and dreams. Hollywood at its best--beyond the crappy movies, discrimination, and damaging stereotypes--provides both a spotlight on marginalized people and the chance to see those same people inhabit a spectrum of roles. It's fantastic to think that Viola Davis has not only played women severely restricted by their race--as in the two parts for which she was nominated for Oscars, Doubt and The Help--but that she has also portrayed lives that those characters could only dream of living. (Such as, Annalise Keating on the show, How to Get Away With Murder, for which Davis won an Emmy--a role of gravitas, charisma, and complexity that we typically associate with straight white men, e.g., James Gandolfini as Tony Soprano, Jon Hamm as Don Draper, etc.)

That's why I'm celebrating Mya Taylor during this year's Oscars. Performances like hers open doors and move back walls and enable us all to embrace the whole of an America that we love. I hope to see her be a great many things in the future. And with that, I give you, Mya Taylor:

[The following "speech" is based on my interview with Ms. Taylor. If she delivered this on a stage, she'd be wearing, "something amazing, with my tits pushed up to the ceiling." So please imagine this as you read.]

When I was a kid I loved watching the Grammys (I was always a singer), and when someone I admired won, it was amazing. Because I thought, if that was me up there, I'd know that I worked hard for it and that it came from the heart.

Tangerine has changed my life.

I was nervous to play this part because I had just started my transition. I felt so unpretty. I didn't look the way I wanted to. But I had to come out of those shades and present myself to the world. Sometimes you have to sacrifice a few things to get something better. I found it within myself to do it. I thought: "Ok, this is an opportunity to do something with your life for once. Make the best out of the experience. Make the most of it."

I didn't know how many people would see the film. It's touching to attend screenings, to go on stage and catch all the energy of the fans. I've had people come up to me and tell me how touching it is, the friendship. They like when I give my wig to Kiki. (And that part was acting, let me tell you, I'm not about to take off my 22-inch hair to put on another bitches head...) But I love to meet people who are moved by it. They like when I sing. My character wanted to sing so badly that she paid to sing. And who knows why the club manager made her pay. Does he make everybody pay? Maybe he felt she wouldn't be good enough, or he didn't like that she was trans. But whatever the case was, she paid, because she loved singing so much.
(And that part was acting too, because, they paid me to sing in this movie...) I've been training as a singer since I was a kid. I guess I was preparing for this my whole life, though I didn't know it.

I don't know if young people should see Tangerine, there's a lot of sex in it, but if girls on the streets see it, I hope they know they're not alone. I hope they see that I got out of sex work and it's possible for them too.

I want to play lots of different roles now. I'd love to be in a scary movie. Or a drama, so I could be mean--like Monique in Precious--cuz I'm really nice in real life. Or maybe a lawyer, with a client who has a difficult case, and maybe someone's trying to kill me because they know I'm gonna win.

In addition to acting, Tangerine has also given me the opportunity to produce my own T.V. show! It's about how trans people go through life, and what I have gone through. There will be a variety of characters. And I won't be the lead, we'll hire a person who is transitioning to be the star. I've already had that opportunity, why not let someone else come in. That's what it's all about, right?

I feel very humble right now, and blessed. The people I work with really listen to me. And I'm so thankful for all of their support in helping me get here. Especially Sean Baker and Chris Bergoch for inviting me to be a collaborator and not just a performer. Mark and Jay Duplass, Magnolia Pictures. My manager, Allan Mandell. My agent, Joanne Wiles. My hair and makeup artist, Christina Cullinski. My very first singing instructor, Nick, who taught me to sing opera!, and to train my voice, which I do every day. God. And my man.

At the end of the day, I'm so lucky to come home to a quiet, normal, life.