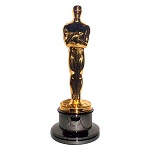 The 82nd Academy Awards on ABC was a mixed bag. It was a tepid start, but eventually picked up steam heading for the finish line.

Showing Best Actor and Actress nominees at the opening was unnecessary and of no emotional value, considering important aspects of the show were cut to make the program smoother.

So why bring in Neil Patrick Harris, who since his Tony Award emcee triumph has been on everyone's must list, leading to his, in my opinion, so-so performance as the Emmy host? His musical number slowed the show down, as he's not a great singer or dancer. He's okay, but nothing like last year's host Hugh Jackman, who can truly belt out a song. 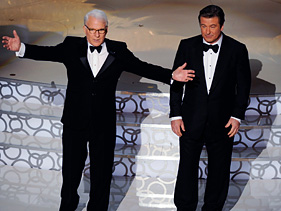 The idea of cohosts seemed brilliant until Steve Martin and Alec Baldwin descended in a cage and then awkwardly did a mediocre bit that was for the most part uninspired and redundant. Instead of wonderful satire about the movie industry mixed with politics, the two went overboard with, "Oh, there's Meryl Streep," "Oh, there's George Clooney," and so on ad nausea until it appeared they were going to single out every celebrity in the house.

However, in award after award it became clear "And the winner is" had returned without prior fanfare. To producers Bill Mechanic and Adam Shankman I give thanks. It was idiotic for iconic terminology to be changed in the guise of political correctness, which of course was followed by copycat award shows. Pity Kate Winslet as she announced "And the Oscar goes to Jeff Bridges." She was the only one who hadn't gotten the memo.

As the show continued it was brisker, and Steve and Alec's one-liners were often on target. However, I was taken aback by the overlong tribute to John Hughes. Don't get me wrong. I understand he made many popular films, and it was sad he died relatively young. But there are far more significant filmmakers -- think Billy Wilder, Alfred Hitchcock and Fred Zinnemann to name a few, who haven't been given such a tribute. And if it's his age that you think caused it to happen, they didn't have such an occasion for Anthony Minghella, who was even younger.

That's what In Memoriam is about, and the people in that section were only given a second or so of attention and, in many instances, were as notable as Hughes, if not more so. Once again, they made it difficult to see the first two -- isn't that what rehearsal is for? I made out Patrick Swayze in the background, but I haven't a clue who was number 2.

And Robert Woodruff Anderson, who was he? It took a moment until I heard lovely Deborah Kerr's voice doing his famous line from Tea and Sympathy. It may be his birth name (as indicated on IMDB), but in his whole career it has been Robert Anderson, and I'm sure lots of people didn't have a clue who the unclear name was.

The idea to cut the best song nominees, the only legitimate variety show moment in an Oscar program, was a wrong call, as the numbers are often showcased by wonderful performers, as opposed to the middling dance numbers accompanying the musical score nominees. But then Adam Shankman is a choreographer, so I imagine it was self-serving.

For me, it was too long and was time that could have been better spent on more significant and unfortunately displaced fare, which is the Academy's greatest affront. They decided last year to award special Oscars at an off-site function and during the broadcast only half-heartedly mentioned the winners, producer Roger Corman, cinematographer Gordon Willis and actress Lauren Bacall.

The idea was to give their special moment more focus, and I'm sure at the banquet last fall each received more attention than they would have during the Oscars. The difference is not many people witnessed those festivities, except for a few seconds shown last night. And when Lauren Bacall and Roger Corman were introduced, it actually took a bit of time before the audience realized it might be appropriate to stand, an occasion quickly cut away to a commercial.

Thank goodness Deborah Kerr, Kirk Douglas and Peter O'Toole received their Oscars prior to this terrible decision. The special Oscar is an emotional time, not only for the honoree but shared by the recipient and billions in the worldwide audience. To diminish the tribute as evidenced by what we saw last night is a disgrace, and hopefully like "And the Oscar goes to," this "fix" will be dispensed with next year.

I very much liked the tributes to Best Actor and Actress nominees. It was fresh and added oomph. I still don't know why Best Director is given as the penultimate prize. In years past it was given beforehand, as the audience tension -- especially viewers watching -- are more interested in who'll win the acting and picture prizes. Not to mention that screenplay honors, formerly given late in the evening, were handed out relatively early. Who made that call?

My favorite acceptance was Michael Giacchino, winner for the musical scoring of Up, who urged young people with a dream not to give up, even if parents and colleagues try to burst the balloon of their spirits.

But who told the announcer to highlight the Oscar chances of Avatar, The Hurt Locker and The Blindside, indicating that coming up there might be an upset? This was insulting to the other seven nominees and more appropriate for a movie commentator, but not as an official part of the Oscar show.

So, for me the Oscars were a B-minus. Some good moments offset by bad. And let's hope other awards shows (including the Writers Guild) go back to "And the winner is."

Download
Calling all HuffPost superfans!
Sign up for membership to become a founding member and help shape HuffPost's next chapter
Join HuffPost
Follow Michael Russnow on Twitter: www.twitter.com/kerrloy
Voting Made Easy
Register to vote and apply for an absentee ballot today
Register now

Hollywood on the Danube
by Michael Russnow