Leonardo DiCaprio, who is nominated for an Oscar (86th Academy Awards, March 2, 2014) for his larger than life performance in The Wolf of Wall Street, shot one memorable scene at Harlem's legendary eatery Rao's. The shoot lent some additional authenticity to the movie about the rise and fall of DiCaprio's wealthy stockbroker.

The original Rao's, the Italian restaurant founded in 1896 at 455 114th Street, only has nine tables but it's the hardest "get" in New York. You have to be invited by one of Rao's regulars. Only open 5 nights a week -- now what restaurant closes on weekends? -- it's frequented by a who's who of the rich, famous and sometimes infamous.

One of its Monday night regular diners is celebrated and retired NYPD detective, Sonny Grosso, whose life story was turned into the five-time Oscar winning movie, The French Connection, in 1971. Grosso, who became an award-winning producer of TV shows and movies after he retired from the NYPD, lived and grew up around the corner from Rao's on 115th Street. Grosso, who's working on his richly memorable memoir, Harlem to Hollywood: My Real to Reel Life, is as authentic a New Yorker as they come. 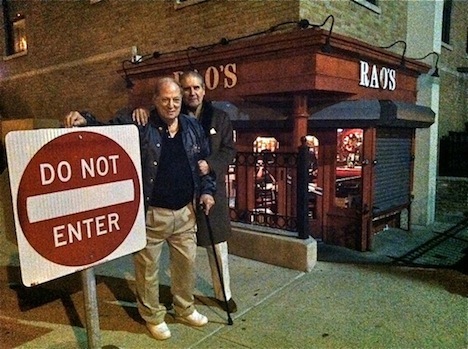 Sonny grew up in a walk-up tenement house on 115th Street right in the heart of Italian Harlem and its storied culture. For example, Rao's then owner "Tough" Joey Rao, who used to pal around with gangster Dutch Schultz, paid his respects to Sonny's family at Farenga's funeral home when his father Benny passed. And, Sonny's beloved mother Lilly would shop on nearby First Avenue. When the family walked past Rao's, Grosso recalls, "My mother would say, 'Don't look into Rao's!' Unfortunately, when you tell kids not to look -- you know what kids do. We looked in! Although, I never saw anything strange through the window!"

Having achieved iconic status himself, Grosso continues to invite all sorts of Oscar caliber celebrities to Rao's, including the late Frank Sinatra and Marlon Brando, along with director William Friedkin and Gene Hackman among many others. But a couple of years ago, even Grosso was heartwarmingly surprised by who dined with him -- one of the biggest movie stars ever and 3-time Oscar winner Jack Nicholson. Grosso says Jack's visit sent Rao's influential clientele into a tizzy but what was so heart-warming was that Nicholson himself had presented the Best Picture Oscar to The French Connection's producer Phil D'Antoni back at the 44th Academy Awards. So it was life coming full circle for Grosso:

I told Jack about my mother's Saturday 'shopping' trips in the neighborhood. She'd go out for two hours from eleven to one with a little apron on because she used to touch everything under the sun. When she came back, she knew who was pregnant, who was getting divorced, who went to jail, who was dating who, who had a fight. She had the scoop on everything because all the women would tell her exactly what's what. Saturday was really for getting the news, for getting all the gossip to tell my father about. She was like a throwback Entertainment Weekly or TMZ correspondent, getting all the juicy stories!

Jack laughed his head off and told me he could relate because we had things in common. He grew up in Asbury Park in New Jersey where my mother was raised. As a kid, he was also a big Yankees fan and a bleacher bum like me, watching with eyes wide open as our heroes like Joe DiMaggio performed their magic.

Grosso says Nicholson graciously accommodated all photo requests inside Rao's and the delighted customers gave him a standing ovation when he left. But Grosso, who'd never seen a reaction like that, suggests a side story speaks volumes about Nicholson and also about the lasting aura of the once magical neighborhood of Italian Harlem.

While waiting for Grosso, Nicholson was asked by longtime Rao's headwaiter, Tommy, if he'd mind visiting his mother and grandmother down the block. As Grosso tells it:

Tommy says to Jack, "They'd get such a thrill to see you." Jack replies, "Sure, let's go see them." Jack takes photos with them. Then Tommy's grandmother says in her sweet Italian accent, "I'mma live in disa house eighty-six years! I go-a nowhere, except disa house. I never thought anything like a-dis could ever happen to me. I love-a you, Mista Nicholson! You-a my favorite actor." He kisses her, saying, "You can call me Jack." Afterwards, she phoned everybody under the sun about it. Although, she passed shortly after, Jack's generosity left a lasting impression.

Grosso, who has earned the prestigious Ellis Island Medal of Honor alongside then-President Bill Clinton, adds, "I swear, you cannot make this stuff up. As I've found in my producing career, reality often makes for better stories than fiction!"