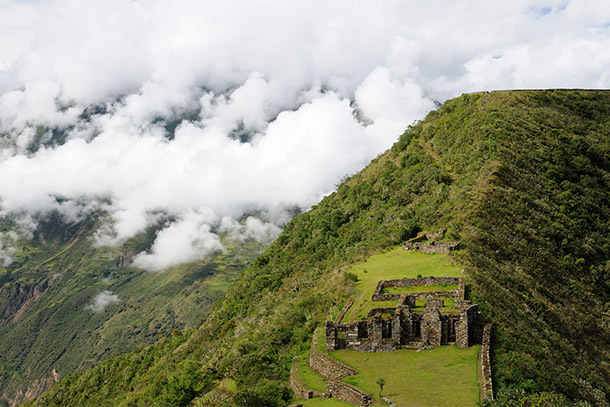 The first bus to Machu Picchu leaves Peru's party-all-night tourist town, Aguas Calientes, at six in the morning. The line to be on it forms sometime after midnight, and by the time the sun pokes over the Andes, the fabled "Lost City of the Incas" looks less like one of the great wonders of the ancient world and more like a modern day Disney theme park.

Don't get me wrong. It's hardly Machu Picchu's fault that you'd barely raise an eyebrow if someone emblazoned the words "Welcome to Incaland" on a sign above the ticket gate. On its own, the 15th century city is everything you hope it will be: a sprawling maze of terraces and stonework, a mountaintop citadel 8,000 feet above the Urubamba River Valley, an ancient marvel. From a distance, it looks just like the postcards.

Elbow-to-elbow tourists. A relentless parade of buses. A five-star hotel and a dozen different Wi-Fi signals. It even has its own app. The disappointing truth is that while Machu Picchu is undoubtedly an awesome archaeological spectacle, it's also everything you secretly fear it might be: crowded, noisy, underwhelming. A tourist trap.

The Other Machu Picchu

But maybe I'm biased. I was already of two minds about visiting Machu Picchu before I booked my trip to Peru. On the one hand, how can you go to Peru and not see Machu Picchu? On the other, is there anywhere in South America that's more famous, more photographed, more Instagrammed? Part of me felt like I'd already experienced Machu Picchu before even setting foot in Peru.

I crave the kind of travel experiences that require trekking poles and a sturdy pair of hiking boots--which is why I rarely find myself among the selfie-stick-toting throngs of sightseers like the ones I saw at Machu Picchu. And it's why the lure of the world's most famous Inca city alone wasn't enough to get me on the plane to South America.

A few years ago I heard about another Inca city on a mountaintop. Like Machu Picchu, it was rediscovered by American explorer Hiram Bingham on one of his early expeditions to South America. And at 10,000 feet, Choquequirao ("cho-kay-kee-rao") is quite a bit higher than Machu Picchu--and a lot less accessible. Therein lay its appeal to me.

The traditional route to Choquequirao requires two days of hiking from the small village of Cachora, about four hours by car from Cusco. This is followed by another four to six days on foot at high altitude before returning to civilization via the Salkantay trek route. No cars, no hotels, no Wi-Fi. There aren't any other options for getting to Choquequirao, either.

You finish the trek on foot or on a stretcher--that's how my trip leader on the Choquequirao to Machu Picchu trek with G Adventures put it. He wasn't joking, although the truly desperate could hitch a ride on the back of a pack horse.

My guide's nickname was Rambo, and he didn't come by it ironically. "The Choquequirao trek is three times harder than the Inca Trail to Machu Picchu," he said at the outset. Then he reconsidered. "Maybe five times harder."

He wasn't joking about that, either.

Trekking to Choquequirao with G Adventures

With G Adventures, the Choquequirao to Machu Picchu trek spans about 100 miles over eight unforgiving days and seven long nights in the wilderness. You camp in tents and drink boiled water. You reach a lung-crushing elevation of nearly 14,000 feet, and in the South American winter (when I went) the days are hot and the nights are freezing. A thermal sleeping bag is your best friend. Sunscreen and DEET are your constant companions.

It's not all hardship, though. The endless cascade of snowcapped peaks, distant rivers, and soaring condors keep you putting one step in front of another on the relentlessly uphill-downhill (never flat) trek.

And then on day three--Choquequirao. The Machu Picchu of a half century ago. No crowds. No roped off areas. Nothing but you and an ancient Inca city in the remote mountains of Peru, with no limits on where you can explore or how long you can spend doing it.

An Inca theme park, this is not.

To be fair, Choquequirao is smaller than Machu Picchu. It's estimated that only about 40 percent of the site has been restored, and indeed when I crawled through the overgrown jungle separating some of Choquequirao's restored areas I found evidence of Inca stonework that hadn't yet been excavated. Maybe it's just me, but I think that's a selling point.

Choquequirao won't be like this forever, though. In an effort to ease the tourist pressure on Machu Picchu, the Peruvian government recently announced plans to build a cable car to Choquequirao. Preliminary work is underway to rebuild an Inca road between Choquequirao and Machu Picchu that would allow hikers to trek directly from one site to the other on the same route the Incas once walked. More archaeological renovation of the city itself is planned, too.

"Five years ago, you might get one or two groups a month to Choquequirao," Rambo says. "Now, one or two a day. Five years from now ... " He doesn't have to finish the thought. The Choquequirao of the future is going to look an awful lot like the Machu Picchu of today, likely a lot sooner than later.

Opinions will vary as to whether that's a good thing. I come down on the side of "see it now." It's a tough trek, rated the highest difficulty by G Adventures, but I think most people who exercise regularly could do it. Mind of over matter and all that--your body can handle it as long as you don't let your brain talk you out of it.

And at the end of the trek, you still get to see Machu Picchu and compare the two sites for yourself. Machu Picchu may not be all it's cracked up to be, but it still makes for a great photograph.

Read the original story: The Other Machu Picchu: Why Choquequirao Is the Real Lost City of the Incas by Josh Roberts, who is a regular contributor to SmarterTravel.