On May 1, 1960, an American U-2 spy plane was shot down over the Soviet Union and its pilot, Francis Gary Powers, was captured. The Eisenhower administration initially attempted to cover up the incident but was soon forced to admit that the U.S. had been conducting reconnaissance flights over the Soviet Union for several years.

During the course of his captivity, Powers was interrogated at length and found guilty of espionage after a show trial. On February 10, 1962, Powers was exchanged in a well-publicized spy swap in Berlin for Soviet KGB Colonel Vilyam Fisher (aka Rudolf Abel), who had been arrested in Brooklyn by the FBI in 1957, as depicted in the 2015 Steven Spielberg movie Bridge of Spies.

Powers received a cold reception on his return home. Initially, he was criticized for having failed to activate his aircraft's self-destruct charge to destroy classified parts of his aircraft before his capture. He was also criticized for not using an optional CIA-issued "suicide pill" to kill himself. Powers appeared before a Senate Armed Services Select Committee hearing, where it was determined that Powers had followed orders, had not divulged any critical information to the Soviets, and had conducted himself "as a fine young man under dangerous circumstances." Powers died in a helicopter crash while covering brush fires for a TV station in Los Angeles in 1977.

Vladimir I. Toumanoff was serving as a political counselor in Moscow at the time. He was interviewed by William D. Morgan in 1999. You can read the entire excerpt here.

Khrushchev looked at the ambassador and announced the shoot-down

TOUMANOFF: The first we came to know of the U-2 was that the Ambassador was invited to attend a session of the Supreme Soviet at which Khrushchev, of course, was going to give a speech and, for whatever reason, [Ambassador] Llewellyn Thompson took me along with him, the first and only time I've ever been to a Supreme Soviet session, because they're not open to American diplomats. They certainly were not in those days.... Khrushchev made a long report and toward the end, looking directly at Thompson, he revealed the fact that an American spy plane had been shot down. As he went on and on about how appallingly nefarious and dangerous was this action by the United States, he did not accuse the President of ordering or perhaps even of knowing about the flight but pointed out that, if not, any American general could start World War III.

Exaggerated accounts of his "crime" were more than enough to warrant execution.

Later, they invited the Ambassador to attend the trial of Francis Gary Powers, the U-2 pilot. Obviously, he did not go, but he sent two of his junior officers, Vice Consul Lewis Bowden, and myself....

There he was, on trial for his life so far as he could tell. He had been held for something like three months with no access to anyone except Soviet authorities, interrogators, and a "planted" cellmate. No Americans nor any foreigners. He'd been held completely isolated from information except what the Soviet authorities provided, and that seems to have been exaggerated accounts of the staggering consequences of his "crime," more than enough to warrant execution....He was being interrogated for intelligence and being prepared to be put on show at the trial....

They wanted to have total control of what he knew, no surprises or conflicting information at the trial. It was to be as nearly totally scripted as they could manage. He was isolated from the world except as they wished him to think it. Outside, the Soviet propaganda machine was, of course, grinding full speed and at very high volume. Besides, Powers knew no Russian.

The Powers family was there, with their lawyers. Remember, this trial was staged for world-wide propaganda. Otherwise they could easily have tried Power in a closed, secret court, as they did with many dissidents. After introductory remarks by the Judge/Prosecutor the trial moved to presentation of evidence. One bit of evidence presented was Powers' flight map, with commentary stressing that the routing over Soviet cities was for bombing run practice to wreak future havoc and slaughter.

At the end of the official presentation the judge asked Powers if he had anything to say. To his surprise Powers rose and asked to see the map. It was the size of a newspaper page. Holding it up with his left hand, he examined it carefully, tracing his flight path with the index finger of his right. The map never shook. It was absolutely still and steady. Satisfied, he confirmed that it was his flight map, and handed it back.

Two things struck me: on trial for his life he was suggesting by his request and action that he, at least, thought this court capable of presenting false or tampered evidence; and that he must have nerves of steel not to show the slightest tremor while doing so.

The Court then called a series of learned, scientific commissions, each of which had been tasked to examine other pieces of evidence. Each Commission, in turn, was introduced with elaborate recitations of the members' impressive credentials. Most were members of the Soviet National Academy of Sciences. The first commission had been asked to examine his pistol, and they concluded that Powers had been given the pistol to murder innocent Soviet citizens.

The judge, having set the precedent, again turned to Powers and asked "Is that your pistol?"

The pistol was brought to him, Powers rose, looked at it and replied "Yes, that's my 22-calibre pistol." He then went on to explain that it was part of his survival gear, if down in the some wilderness, to be able to shoot small game such as birds, rabbits or squirrels, for food. The 22-caliber was well known in the Soviet Union. Common in most of the world, it is a plinking gun. One that's not much good for anything larger than a woodchuck, or porcupine, if that....

If your purpose were really to go murder people, which includes innocent Soviet citizens, you wouldn't take a .22 -- in the 1950s, more like a standard army Colt .45, as the Moros taught us in the Philippine War. So here's Powers, on trial for his life, discrediting the learned commission and its testimony, and undermining the validity of the court....But risking his life by undermining the credibility of the Court.

The next learned commission dealt with the poison pin. And they, too, concluded and testified that it was given to Powers for him to murder innocent Soviet citizens, this time in a surreptitious fashion, so they might not even know that they had been poisoned with a deadly poison.

Having set the pattern, the Judge felt obliged to turn again to Powers. He explained that this, too, was part of his accident gear. In case he was very badly injured, helpless, in agony, or attacked by wild beasts, with no prospect of survival, the pin would end his life quickly and painlessly.

Q: Or to silence himself under duress which, of course, was the big story.

TOUMANOFF: That aspect never came up in court, and couldn't. It would imply that Soviet interrogation might be savage. But once again, you see, he's attempting, and probably effectively, to discredit these learned commissions and undermine the process. The next learned commission was given what the commission described as "an incendiary device" designed to burn down "our homes, our factories, and our people's economy."

I'm not quoting exactly, but the general tenor was that this was to destroy the fabric of the society by flames. Again the Judge turns to Francis Gary Powers and again he rises to address the court, asks to see the device, and they hand him an object, the size of a small box of matches.

He looked at it, and explained, "It is also a part of my survival equipment, a form of matches with which, if I'm down in a wilderness, to light a campfire, even with wet wood." Then Powers asked that the object be given to the interpreter so he could read and translate into Russian the instructions on the box.

They turned out to be directions on how to build a campfire with wet wood. Powers then asked the interpreter to please turn the box over and describe the picture on the back. The interpreter turned the box, hesitated and looked at the judge. The judge ordered, "Do it!" And he said, "It's a picture of a campfire." Powers sat down. 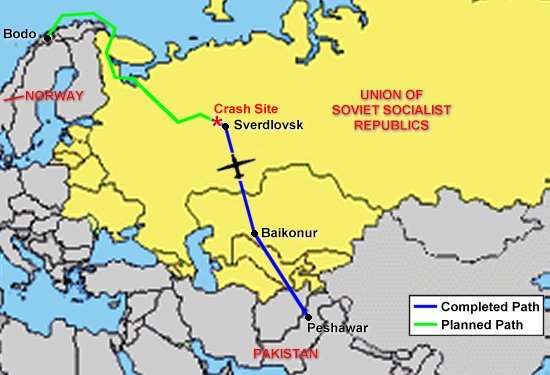 And here's this extraordinary person, doing his quiet, dignified best, and succeeding, in revealing the court for the propaganda theatrical it was; in demonstrating before the journalists of the world the clumsy and cynical corruption of the Soviet judicial system along with its scholars; in defending his own nation as best he could; and deeply risking his own life in the process.

So far as I can tell, the Western press missed it. Not one word of his astounding courage, integrity, and loyalty under the most fearful conditions was ever printed or broadcast. By that time the Western news media, as an entire institution, was in some sort of mass hysteria to condemn and sacrifice Francis Gary Powers for betrayal of America by "failure" to commit suicide. Scapegoating, I call it.

I would ask whom and what our media was itself betraying by being blind or silent on his actions in court. Was it betrayal of him alone, or of our nation? Would we be better off if we felt betrayed, or if we recognized a heroic act by one of us? If he had used the pin on the ground, unhurt, would the flight not have been flown, the U-2 not crashed, the poison gone undetected, or Soviet response been different? Would we, as a nation, prefer suicide as our model, or Powers' acts in court had they been reported?

Powers couldn't use the pin when falling by parachute. He'd have to have used it on the ground after landing, and with no fatal injuries there would have been an autopsy to determine cause of death and the poison discovered.

They held Powers for a couple of months or more before the trial. They had already blown away Ike's visit and the Paris multilateral summit. They also wanted time to interrogate, to get all the information they could out of Powers, and to prepare him for the trial.

The fascinating thing is the psychology of that period....I mean, for all their interrogation and observation, they had failed to see what kind of a human being he was. They had put him up on trial convinced that, faced with the possibility of a death verdict, he would be perfectly compliant and, when asked if he had anything to say, would confirm the preceding "evidence" by having nothing to say, or by acknowledging, "Yes, that's my route map. Yes, that's my pistol, of course, of course. Yes, that's my incendiary device. Yes, that's my poison pin." The last thing in the world they expected was a challenge of the findings of their learned commissions.

At first I couldn't believe my eyes and ears as I watched and heard him, quietly, with respect and dignity, do what he did. And there was a strength and integrity to him that came through. So when he said to the court, "I could never think of shooting a person," it rang true. They recruited the right guy....He really should have been a hero. I'm sure there were those who defended him. He must have been defended by part of the press, but he was forever tarnished with that "betrayal" brush.