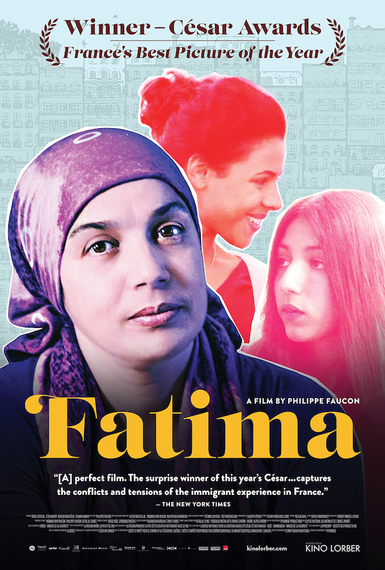 Lets face it, women are the largest minority group there is, worldwide. To most men, we are "the Other".

Yet, in his latest film Fatima, filmmaker Philippe Faucon courageously features not one but three female protagonists, a mother and two daughters, who although in today's society are viewed to be "the Other" -- Algerian, Muslim, living in France -- they really represent us all.

Born in Morocco of a French father and Algerian mother, Faucon makes films which time and time again immerse his audiences into worlds of cultures that although ostracized by society, really hold the key to understanding the world around us. 'Around us' -- such a powerful combination of words. Because we are surrounded by so much we don't take the time or energy to understand, and yet, day by day, those walls we build to keep 'the Other' out are instead locking us in. The laws we implement only adding to the problem. Truth is, the further we segregate ourselves, the less peaceful we will feel.

That said, a great film to me needs to be, above all, entertaining. Lofty conversations turn often to important films, which Fatima is of course. But no one wants to sit through one and a half hours of being taught about the world, and our society, unless that message is coddled by a beautiful, spellbinding film. Fatima is all that and more, the kind of simple, quiet masterpiece that grabs hold of the viewer from the first shot to the last. And there's more.

The film brings to the big screen the real life story of Fatima Elayoubi, whose poetry and diaries of day to day living and working as an Algerian immigrant in France became a book titled "Prayer to the Moon" (Prière à la lune). Fatima is produced, directed and co-written by Faucon and was multi-awarded (it won 3 César Awards in 2016), as well as beloved by festival and French cinema audiences alike.

Now it's finally being released in the US, opening in NYC on August 26th at the Film Society of Lincoln Center, followed by Los Angeles on September 16th at the Laemmle Royal Theater and hopefully in more cities to come.

The story of Fatima is about an Algerian immigrant who lives in Lyon with her two teenage daughters, Souad and Nesrine. To put her daughters through school, Fatima works cleaning jobs, because her knowledge of French is limited. The world she has moved to is less than welcoming to immigrants, and yet the deepest struggles for the three women have to do with internal, family dynamics, the different languages Fatima and her daughters are fluent in, and generational misunderstandings. It's a complex story to tell on the big screen and yet, at the end of Fatima, we feel as if we've lived with them all, walked that proverbial mile in their shoes.

It's seldom that a film manages that kind of intimacy between the audience and its characters, and, at the risk of sounding gender biased, even more rare when the filmmaker is a man. Yet Faucon gets it, through and through, the inner struggles of being a woman, a mother, a sister, a daughter. And of course, an immigrant, as most of us are, in one way or another these days.

I caught up with Faucon by email and even through a translated document from French to English, his charm, his sense of humor, and his brilliance shined through.

That's what the magic of cinema is all about, promoting a sort of cultural understanding that transcends languages and borders.

How do you manage to get so perfectly and so deeply inside the head of women?

Philippe Faucon: I definitely see aspects of myself in them. Or, in any case, I am very admiring of the strength they have to affirm what they are being denied, of their refusal to accept the demeaning perceptions that attempt to box them into assigned roles, into identities, behaviors that don't fit them. What really impressed me with the real persons that inspired the characters of the film, is that these are women who simply can't 'give up'. Fatima can't 'give up' because she is responsible for the daily lives of her daughters. She plows forward, in a rigid manner and refuses to flinch. Same with her eldest daughter Nesrine. She can't 'give up' either because she has taken on studies that are so all encompassing that she refuses to 'give up', even when she is tempted to do so. As for the youngest, Souad, she can't 'give up' her messy adolescent revolt, because in the end, she is able to express what the two other do not allow themselves to say. 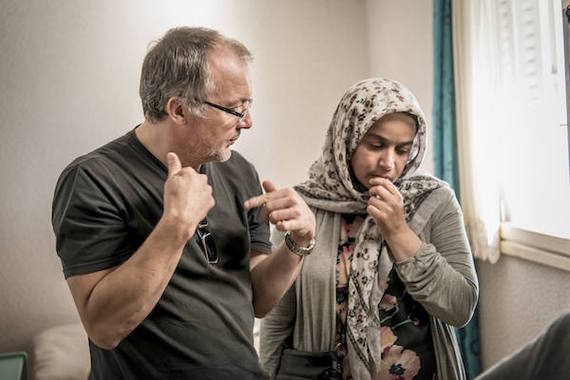 What are the challenges of producing and writing a film like Fatima, on top of already being the director? And what are the advantages of your multiple roles?

Faucon: Of course, it's a huge time commitment to have become the producer of my own films. You lose a bit of freedom on one hand and gain some on the other. I decide how the money is allocated, I actually know how it is spent, and at the same time, the time dedicated to production eats up the time I would like to devote to writing or simply thinking. But when you assume those three roles on a movie, you necessarily have a more intense relationship with it. In a certain way, you experience directing more fully, when you know the real challenges of writing and the mastery of producing.

Do you believe in cinema as a bridge to understand cultures that are different from ours, and why?

Faucon: Yes, because cinema has the great power to show us faces, voices, bodies, human qualities, other ways of thinking or living that are different than ours. Therefore it offers us the possibility of becoming closer to each other. It allows us to have a glimpse, to understand or to reflect in a new way.

In the last few years, I've watched a few films that feature female characters from North Africa and the Middle East, but they are mainly girls. In Fatima you feature a real, grown-up woman, which in my opinion, is a much more difficult task. Did you ever feel the pull of Nesrine and Souad, of wanting to give them more of the story, and therefore making your work 'easier'?

Faucon: True, these adult characters are less represented, perhaps because they are more often in 'invisible' situations in French society. But here, I had at my disposal Fatima Elayoubi's book, a sort of diary that she kept for her entire work life and time as an immigrant in France. I also was able to meet the author several times. She is an extraordinary person. Fatima Elayoubi's daughters come up constantly in her book, one that she wrote primarily in her own language of Arabic. In writing, she chose to express herself in her native tongue what she couldn't express directly to her daughters who were born in France and who didn't master the Arabic language fully. 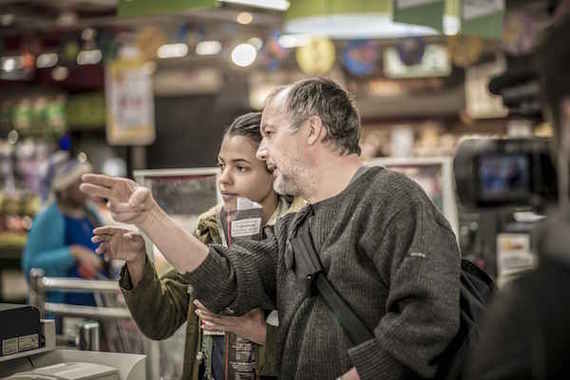 In the wake of so many incidents in Europe, involving people of Middle Eastern background, do you think cinema can offer a solution?

Faucon: As I said before, cinema may help foster additional understanding, including for the current situations you bring up. But action and solutions remain in the realm of politics and citizenship.

What three words would you use to describe yourself to someone who doesn't know you?

And what is your favorite place in the world?

Faucon: Right now, it's Paris that I am always happy to come back to, after having left the city wanting to discover other places.

All images courtesy of Kino Lorber, used with permission.