I've seen plenty of things making FUN of us....We would love to be part of a general marketing campaign if the media world would accept Muslims as a common part of the North American diaspora. -Amethyst, Creator of Ninjabi

Advertising in the United States has often influenced the pop-culture identities of religious and ethnic minorities. To be targeted by marketers serves as an invitation to join in the national narrative of capitalism. To shop is to be American.

In 2009, the US marketplace will begin to truly recognize and court the $170 billion purchasing power of American-Muslims. To date, pop-culture representations of Islam are either cloaked in evil or infused with pathos. But as Hallmark, Wal-Mart and 20th Century Fox aim to engage this consumer demographic, it will slowly help to prove that American-Muslims are, as Professor Farid Senzai says, "boring as the rest of us [Americans]."

When considering marketers' slow embrace of Muslim consumers, we must acknowledge legal scholar Leti Volpp's point that "September 11 facilitated the consolidation of a new identity category that groups together persons who appear 'Middle Eastern, Arab, or Muslim.' This consolidation reflects a racialization wherein members of this group are identified as terrorists and disidentified as citizens."

It is this conflation that bore the 2008 Dunkin Donuts controversy. Spokeswoman Rachel Ray wore a scarf that looked like a keffiyeh in a TV commercial and right-wing blogger Michelle Malkin then chided Ray for wearing a 'jihadi chic' garment. Dunkin Donuts dropped the advert. At no point was the spot even attempting to engage Islam or the Middle East, yet there was backlash.

No doubt that marketers considering this space are wary of the Islamaphobic chatter within media. And are likely confused by the diversity of people and practices within the American-Muslim population. But I posit that this may be similar to the hurdles brands faced when first reaching out to gay and lesbian consumers. And as Saad Ahmad, of the blog Chill Yo, Islam Yo, said "seeing that we live in a capitalist society, [including Islam] in advertising is really just an economic issue." 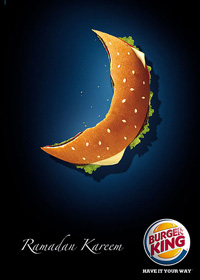 Such inclusion has been discussed within the ad industry, but little action has been taken. Yet consumer demand is there and (full disclosure) our company is responding to it. We'd be heedless to ignore Long Island radiologist Almas Abbasi. who told the New York Times "If Ramadan starts, and you see an ad in the newspaper saying, 'Happy Ramadan, here's a special in our store,' everyone will run to that store." Now, American brands indeed do this within primarily Muslim countries - Burger King in UAE, HP in Bangladesh, Oreos in Indonesia etc. Though to date, no Muslim holidays are seized as a sales opportunity within the US. Except perhaps in Dearborn, Michigan, a city with the highest concentration of Muslims and Middle Eastern folks in America. Wal-Mart has opened a store in Dearborn designed for this demo. Newsweek reports that:

Wal-Mart offers its standard fare, plus 550 items targeted at Middle Eastern shoppers....walk through the front door of the 200,000-square-foot supercenter and instead of rows of checkout counters, you find a scene akin to a farmers market in Beirut. Twenty-two tables are stacked high with fresh produce like kusa and batenjan, squash and eggplant used in Middle Eastern dishes... a walled-off section of the butcher case is devoted to Halal meats.

Ikea has taken measures to court Dearborn shoppers and the local McDonalds and KFC serve halal meat. On the national scale, Hallmark carries Eid cards and the USPS issued an Eid stamp in 2001. But that's about it.

While tailoring products to reach this consumer base is one important step for retailers, Yasmine Hafiz reminds us that "the average Muslim consumer is much like the average American consumer, with wants and needs mainly dictated by their income, education, and type of family. Their socioeconomic status dictates their spending habits more than their religious affiliation... there's a lot of untapped buying potential amongst all these doctors & engineers."

And as noted on the blog Muslim Canvas, "I guess the value I see in this marketing stuff is the effect it'll have on the American psyche, rather than the Muslim psyche necessarily. [Seeing] a hijabi mom spreading Jif peanut butter on her son's sandwich, or of a long-bearded man answering the door on a Domino's commercial, could go a long way for our "image".

The forthcoming US version of the CBC sitcom Little Mosque on the Prairie could be a space for product placement. That said, brands must be adroit and not fall prey to tropes like the soul-claps and sombreros that plague too many minority-market campaigns. Nor forget that only half of American-Muslim women wear a hijab or think that Islam is the sole aspect of Muslim consumers' identities.

While engaging Islam may appear complex, what remains quite simple is that there are millions of American consumers still being ignored. Millions of consumers who are waiting to see which brands will be smart enough to embrace them as fellow Americans.

NOTE: This is an excerpt from the white paper American-Muslim Identity: Advertising, Mass Media + New Media, which will be included in the forthcoming book Muslim Societies in the Age of Mass Consumption from Cambridge Scholars Publishing.

Michael Hastings-Black is the co-founder of Desedo Films, a NYC production company that specializes in new media + minority markets.