The Overnight is a deceptively light exploration of marriage and its rough relationship with autonomy. Imagine if Gone Girl was a raunchy comedy or American Pie was an art-house indie. In other words, it's a subtle yet dense character-driven film framed as an R-rated romp.

For my money, the most terrifying movies are never horror movies because they are meant to be scary. You know the ones, all cheap thrills and forced suspense. Adversely, here is a comedy that can shake a person to their core. Assuming the most terrifying thing in an average life is shame, the entire movie is a journey into fear. As the moon moves through the starless black Los Angeles sky, the lines between voyeur and exhibitionist are blurred, minds are altered, boundaries are stretched and twisted. If you are a free-wheelin' poet ramblin' from town to town, it's the kind of night you'd write a song about. But if you're a well-intentioned young married couple trying to build a life for your child, then a night like that has the potential to tear apart your world. 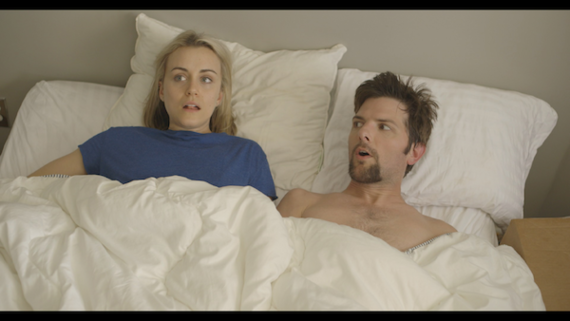 Adam Scott and Taylor Schilling play the unassuming lead couple with the perfect blend of nuance, warmth and naiveté. Having just moved to Los Angeles from Seattle Alex (Scott) is anxious and eager to meet and make friends, while his wife Emily (Schilling) is content just to be in her new home with her husband and son. Enter the much cooler Kurt played with zeal by the always fantastic, Jason Schwartzman. The opening moments hint at something sinister, but we are consistently put at ease by effortlessly breezy performances of the competent cast. And every line and look thrown between characters has an impactful payoff later in the evening, as the layers of inhibition are slowly stripped away. 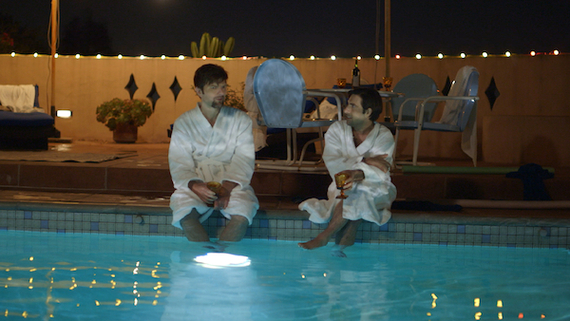 The strange thing about comedy is that in order for it to work we can't see it coming. It's like a magic trick. Sloppy slight of hand is not slight of hand at all. We shouldn't see the strings. The suspension of disbelief is so deep in comedy it becomes hard to analyze. Because if it's really working the act of laughter is intoxicating, and anybody who's been properly intoxicated knows that the details of the night before become hard to recount the morning after. Comedians cover their tracks. It's an incredibly illusive thing to pin down and discuss. This is why comedies don't win Oscars. If something is funny it is assumed to have little-to-no lasting resonance. But as current pop culture figures like Judd Apotow and Louis CK have proved time and time again, comedy can be the best place to reveal universal truths and affect waves of personal and societal progress. In this way, comedy becomes a thought ninja. You think you're laughing and everything's light and fun, meanwhile your brain is being boxed into submission by agitating ideas and illuminating exposures. The incredible thing about The Overnight is that the laughs come from the same place as the discomfort. 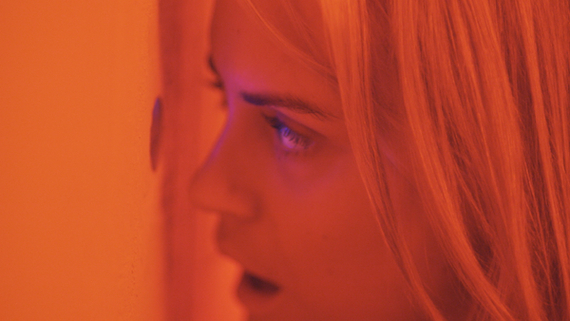 Taylor Schilling stars in THE OVERNIGHT. Copyright - The Orchard

This flick really succeeds in mind-expanding observations and a rich commentary on a suburban life in Los Angeles. In fact, a key to understanding the story is its location. Do the suburbs even exist in LA? It can be argued Los Angeles is merely a collection of suburbs with a small city downtown and a few film studios scattered around it. It's a weird place to grow up in some ways, but in large part the city of angles is nothing more than average people living quiet lives. Beyond that, it speaks to a generational truth. After all the dust has settled from the sexual revolution, and the advent of social media has penetrated the majority, what does the landscape of modern relationships look like? Movies like this are immensely important for the simple reason that they are attempting to expand our understanding of ourselves and our fears. It is art like this film that exposes urgent modern ideas to the close-minded collective unconscious and pushes oppression toward the wrong side of history.

The reason anybody has a closed mind is simply fear. The willingly ignorant mind harbors the deep fear of letting ideas slip in that they will have to see in the mirror every day. They are afraid of themselves. If you are truly tolerant others you have to expose yourself to your deepest inner fears. That's what progress is. In the popular 90s video game Mario 64 there are these white translucent ghosts. If you're not looking at them they sneak up behind you and kill you. However, if you look at them straight ahead, they disappear. Just like these false fears, when examined they are rendered powerless. Homophobia, transphobia, xenophobia of any kind, racism, sexism -- they are all just ghosts. Movies like The Overnight encourage people to look at those ghosts so they can disappear.