Flaming June is one of those paintings whose story adds to its beauty and allure.

The story of how Andrew Lloyd Webber saw Flaming June by Lord Leighton in a store window in the 60's is legendary. He loved the painting but did not have the £50 to buy it. Can you imagine how heartbreaking it would be to find one of the finest of Victorian paintings for that price and not being able to afford it? He trusted his eye and his heart. He did not care that the critics at that time cared nothing for that sort of Victorian sentiment, rejecting it with derogatory terms if they were forced to comment on it at all. But, he knew what he liked and he wanted that painting! He went to his grandmother and asked her for the money to buy it but she wrote it off as kitsch and did not give him the money.
As he later said, "At dinner parties of my parents generation, if you really wanted people to choke into their fondu sets, you mentioned the Pre-Rafaelites." 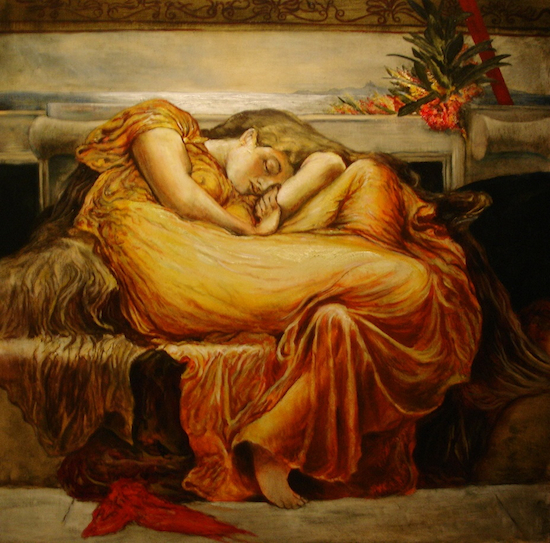 For Andrew Lloyd Webber, this was the painting that got away. It is now in the Ponce Museum of Art in Puerto Rico and is not for sale even though Webber has offered £6 million for it. He has one of the most extensive and important collection of Victorian work in existence but he does not have Flaming June. There is a great video documentary about Andrew Lloyd Webber's passion for the Pre-Rafaelites which I recommend.

People, in general, seem to like to tell the story of the one that got away. 'I should have bought it while I had the chance' is much more common than the story of the smart person who jumped at the chance that was presented to them. Why is this? Does it make them feel better to know that they missed out on an opportunity? I think this is a way to distinguish the masses from those who are visionary. Visionaries trust themselves and they seize opportunities as they arise. In my conversations with people I began to note such stories when they came up and kept an ear out for those who told a different story. A story of how they acted wisely, at the right time, in the right way and how they now have the satisfaction of owning a painting that spoke to them from the beginning. Not having the money is one thing. Having it and still missing the boat is another.

Passion for painting is just that, a passion. As soon as you find a painting that you really love, you know it intuitively. Almost every buyer ends up with the painting that first got their attention. The one that drew them in. Once that happens though, the mind can be quick to counter with all kinds of rationalities as to why the painting should not be purchased. Other expenses pop up, is it the best investment questions, how do I know this is a good painting and am I getting ripped off? What will my husband think? Of course these might be important considerations but most people listen to this chatter and miss out on something that truly moves them. They miss the opportunity to live with that feeling on a daily basis.

In one case when I was working in a gallery, a customer came in and said that they were interested in a specific painting. I showed it to them in the viewing room, spent some time with them talking about financing and after being on the verge of buying it several times decided to go have dinner and think about it. They left and as soon as they did a young couple approached me in the viewing room where I had hung the painting for the previous couple to enjoy. The new couple did not look like buyers at all. They said to me, "We heard you talking about this painting to those other people. We love it very much and want to buy it. Is it still for sale?"

I sold it right then, without the discount I had been offering the first couple (The buyers did not ask for one). and, by the time the first couple had come back from dinner, happy about the purchase they thought they were about to make, they were astonished to learn that "their" painting had sold. I had to politely tell them I told you so since I had encouraged them to make a refundable down payment to hold the painting for them, which they had refused on the grounds that they were hungry.

Fortunately, not everyone is like that. Visionaries exist. At the opening of one exhibition I had a wonderful thing happen. At the opening of the doors, there was a crowd of people already and the gallery filled up fast. A smart couple came in arriving only few minutes after the others and greeted me before turning their attention to the exhibition. There was already a crowd around one especially beautiful painting and this couple could see that there was some excitement there. They both went over and she made her way through the crowd to get a closer look. She turned to her husband, nodded silently, got the same response in return from him and then she announced out loud that she was buying this painting, the big one, in the center, and I directed her to the gallery owner with smiles. They trusted their own taste. It was clear to everyone that they were the smartest couple in the room. Everybody else knew in that moment that they had missed something. And they had. I heard it echo throughout the afternoon about how, "if I had been faster" and if only they had spoken for it right away.

Not every painting is for you. The ones that are for you are like rare jewels and only come along once in a lifetime. I have heard that collectors today listen to the advice of the critic. I have heard that this has watered down the quality of the art. Perhaps the reason that most Art is so ho-hum is so that the critic can tell us what is good and what isn't as it is impossible to tell otherwise. What if people decided for themselves what was good? If people could decide for themselves, which they can, would they buy what moves them, what the consultant suggests that they buy or do they just like telling the story of the one that got away?