Take for a moment the spectrum of Realism and the raucous jazz of Abstraction in painting and slide somewhere in the middle. Over to the left is realism flexing its technical prowess, and it is impressive-- posing in the sun like a young Arnold Schwarzennegger. But once the painter leaves it, when reality is tweaked or cracked open and abstraction seeps in, the mind wanders inside the crevasses and when done right, it sets the viewer free, free to interpret or imagine something greater than even what the painter had in store. The longer I paint, the more I leave realism and revere painters who ride that certain edge in between. Arnold looks so silly in that bathing suit anyway.

I have long cultivated the thought of artist as Painting Whisperer; that the better artist possesses some secret frequency to channel the right moves. When one can tune in better, the paintings will just fly out like songs or messages from a distant galaxy. Or like a novelist whose characters develop minds of their owns and "write the rest of the story" themselves. This is also a common fantasy among the critics and viewers not in the trenches. Perhaps Irving Stone helped start it in The Agony and the Ecstasy when he depicted the young Michelangelo coaxing the figures out of the marble slabs, setting them free. But it's not so simple. How many film students studying Godard revel in some bizarre effect, only to find later that something spilled on the camera lens? It was an accident, dammit! But a great one, like discovering penicillin from the mold on cheese. 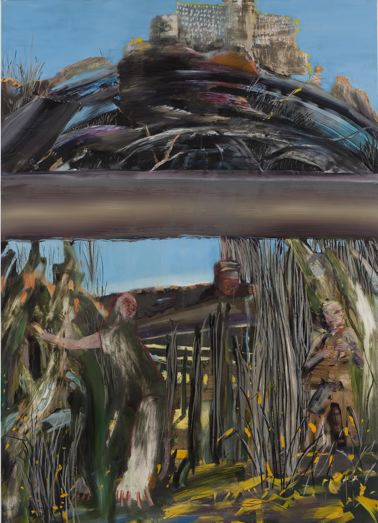 Annie Lapin is one such artist whose work lies somewhere in that amazing middle. Her recent paintings deftly disorient and bend the pitch of reality just enough to make you fall inside them. When I look at Annie's work, I had projected that she must talk to her canvas, how else must these scenes come into being? I'm fascinated by what gets planned and tossed and when. But in talking with her, I learn, she is no painting whisperer-- she is not the passive recipient of some canvas telling her what to do. No! She is Charlie Sheen starring in her own version of The Apocalypse, where every possibility is fraught with consequences, and each stroke, like Chaos' butterfly wing, causes rainstorms elsewhere on the canvas. So the real conversation, then-- the whispering-- occurs less between artist and canvas and more between the viewer and the final work, which is exactly what great art should do. Her show, "Gruppology" opens tonight at the Angles Gallery in Santa Monica, CA.

KB: How do you start a painting, Annie? I see remnants of photographic imagery and reality but am not convinced that you're looking at anything when you make it.

AL: On all of my larger works, I work from my head. It is a process of reacting to the image... layering, and allowing it to develop is if it were a photo in emulsion. I also do a lot of watercolor exercises, which tend to be diptychs on little pieces of paper. For these I often paint from photos of current events or other things that seem prevalent in the media. By doing this I get to recharge both my mind and my hand with the tropes of realism, quotations of photographic lighting and reformulations of the images that we all think we know so well. Then those things come out naturally when I compose my larger works on canvas, and I am more able to subvert them because I am not looking directly at a photograph. 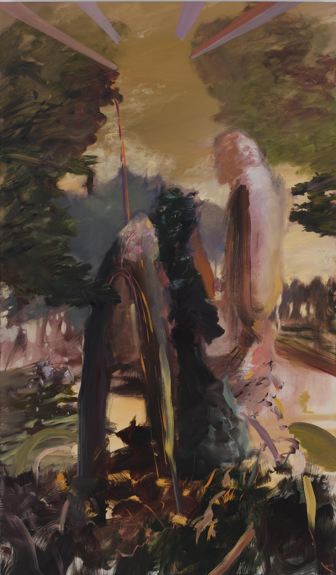 When you're working on the bigger canvases, do ever get the feeling that the paintings talk to you while you're making them and tell you want they want done to them? Like a novelists who invents characters that start having minds of their own? When does that happen? All during or never?

AL: I wish my paintings would talk to me, but sadly, radio silence. It's a process of trial and error as I search for that unique solution which will allow it to resonate in the way I am after. KB: No kidding. I have full-blown arguments, wrestling matches and make-out sessions. I've been aspiring to be a "Painting Whisperer" trying to listen to the next move as much as I want my mind to control it.

AL: I wish it were that way, but it is definitely not a "painting whisperer" process. I have way way way too much anxiety to be a "painting whisperer." I always feel the painting could go a million ways, I choose one, and typically, after the initial high, I feel miserable about it. And even after it's "done" I could see a million ways to destroy it or subvert it, which I often feel compelled to do if the image is too resolved. Once the painting is "done" I am always sure there was another way I could have taken a painting... but I comfort myself by looking at it and just superimposing those ways on the canvas in my mind.

Rather, let's just say I am an "illusion junkie," rearranging and recombining shapes and forms like a heroin addict searching for veins that haven't been used in order to give myself the best fix I can manage of a satisfactory imagery. And that satisfactory image tends to arise from notions I have about the way the mind works and tries to settle questions about what it's seeing. I relate more to neurological and cognitive experimentation than I do to a personal dialog with the work. The goal of my experimentation is not something I can readily put into words beyond saying that I strive to encounter the process of cognition through playing with the construction of meaning. That is where I get my high. 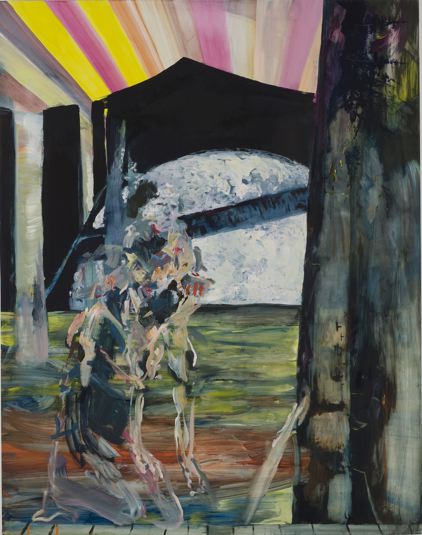 KB: That's clearly some very good stuff. What is the source of inspiration for your show, "Gruppology", opening tonight?

AL: I often think about an emotional experience I had when I was sixteen in response to the novel The Moon and Sixpence, by Somerset Maugham. It documents the life of a painter in his journey away from his entrenchment in bourgeois society to arrive finally and metaphorically on a remote island, completing his rift with "civilization." There he ultimately contracts leprosy and spends the final two years of his life in a single room, alone except for occasional visits from his wife. He goes blind, but over those two years he fills the room from ceiling to floor with paintings. Reading Maugham's description of that room basically launched me into a visceral and intellectual panic attack that lasted for about a month! Suddenly I found myself grappling with a sudden mistrust in my perception of the world. I saw this painter who created, lived in, and finally died in this painted room, as any human being, living in the world of sensation. I'm not sure how this happened but suddenly I felt like the world I lived in was also just a painted room! At 16 I'd never even heard of deconstruction or phenomenology, which allow us to intellectualize such concepts, so this was a highly emotional - and very strange - experience for me. I think the current work speaks to some of that same anxiety I had back then -- that the vision of the world we think to be so stable is as thin, frail, and constructed as a painting and visa versa. On the flip side, there is an optimism if not a euphoria about painting: that it can reflect the whole world and more.

KB: Does the euphoria come from reflecting the world or discovering or being able to depict things you never imagined? I say this because your paintings have a surreal/imaginary quality to them.

AL: I am less interested in the depiction of "things," real or imagined, than I am in the way certain images play with our minds at various points in history and culture. In my most optimistic moments, I sometimes believe that painting has the capacity to provoke a confrontation with the process of cognition, on both an individual and a societal level. The imaginary or surreal quality of my work probably is a natural bi-product of my experiments toward that elusive end. 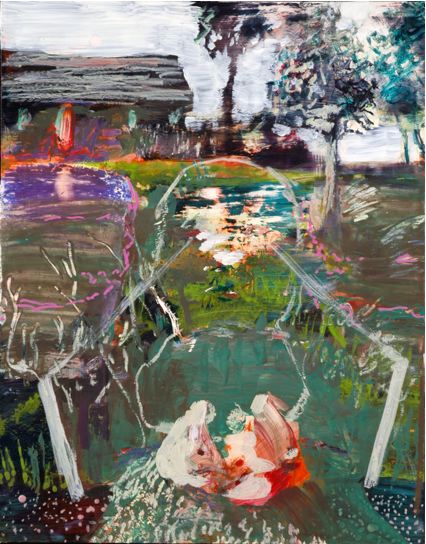 KB: What was your inspiration behind "Land Gods"?

AL: I have a reverence for the constructs of visual illusionism, because I feel that they are constituents of a much larger mechanism, which connects each of us to what we perceive in the world. When I made Land Gods, I was thinking very specifically of the work as an icon to perception and cognition. It gains power and an air of the sacred through its layers of illusion. It is small, about 14" x 11". And yet it contains a deep landscape. Additionally there are overlapping images in this painting. The deep space of the landscape also stacks vertically on top of itself to create another image, composed of large faces, that is on a plane that basically parallels the surface of the painting. This component of the painting, the face painted without depth, alludes to Byzantine iconographic space, which was reserved for holy imagery. I call the work Land Gods, because I think that this painting also reflects the multiple ways that people look at the land, as something alternately animated, sublime, or simply as real estate. All these ideas about the landscape haunt our minds any time we conceive of or look at the terrain around us. They are like ghosts... or gods. 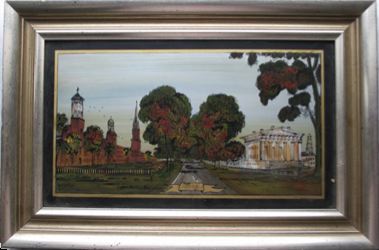 AL: Here is an image of a painting I had on my bedroom wall as a child. I spent years staring at this image as I lay in bed, never imagining that there was an artist behind it, or that it was meant to depict something specific. I didn't think of it as a work of art with an intention. Instead, it was a constantly changing thing as I projected various interpretations onto it. I think most of the time I imagined the two large forms at the end of the road were two hulking monsters, lumbering along together, sometimes with good intent, sometimes bad. Other times I focused on the abstract forms and the symmetry of the image. Though it generated many stories in my head, this thing had no clear meaning to me. I suppose it scared me sometimes, but mostly it was just fascinating. I often feel as if I am trying to recreate my experience with that little landscape painting as I encounter forms on the canvass, and sometimes in the world around me.

Before receiving her MFA from UCLA in 2007, Annie received her BA from Yale University and a Post-Baccalaureate Certificate from The School of the Art Institute of Chicago. She will have a solo exhibition at Grand Arts in Kansas City, Missouri, in June, 2008. Her work has been exhibited in group shows at Angles Gallery, Roberts and Tilton, Daniel Weinberg Gallery, and the L.A. Weekly Annual Biennial. Gruppology is Lapin's first solo exhibition at the Angles Gallery, running from 17 May - 21 June 2008. Angles Gallery: 2230 Main Street, Santa Monica CA 90405 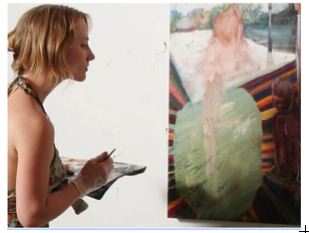 First Person Artist is a weekly column by artist Kimberly Brooks in which she provides commentary on the creative process and showcases artists' work from around the world. Come back every Saturday for more Kimberly Brooks. You can view more interviews and essays at www.firstpersonartist.com.