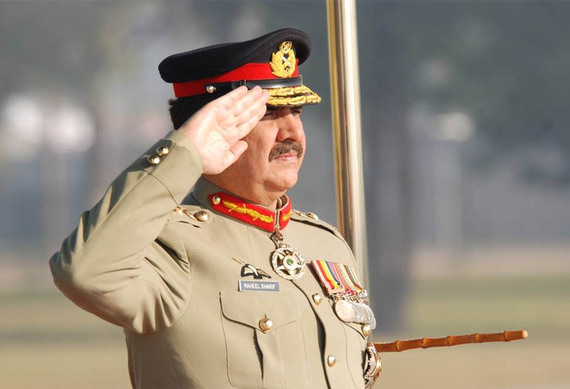 Media leaks have revealed that Pakistan's powerful army chief General Raheel Sharif has sacked at least twelve senior army officers because of their involvement in 'corruption'. The army has not provided more details about the nature and scale of corruption these officers were involved in. This is an extraordinary development given the fact that the military, the actual center for political power in the country, has historically silenced calls for accountability and transparency with regards to the perception about widespread corruption within its ranks. In the first place, it requires enormous courage and also involves great risks for journalists and politicians to question the corruption in the army or seek accountability.

In 2007 when the fearless defense analyst Dr. Ayesha Siddiqa published her remarkable book, Military Inc., probably the best account ever about the Pakistani military's wealth and its internal distribution among the top officials, the army immediately cancelled the book launch. A Chicago Tribune correspondent stationed in Islamabad reported that "all the fancy hotels in Pakistan's capital decided not to rent out their meeting halls" for the book launch due to pressure from the army.

However, the book still succeeded in creating great damage to the beneficiaries of the military industrial complex. It created a good deal of understanding among the educated Pakistani middle class about the culture of protected interests within the army, how the senior generals guarded each other and patronized the junior officers in order to perpetuate and protect the corrupt system that safeguarded everyone's economic interests.

Nevertheless, calls for the army's accountability have never been a popular election slogan because of its high cost for the politicians, including the possible derailment of democracy or fabrication of false corruption cases against vocal politicians.

In private conversations, both senior and junior army officers do not deny the existence of corruption but then they insist that the army has an internal mechanism to deal with corruption and breach of discipline. The whole world does not need to know, they argue, about corruption in "our army" because it will tarnish the institution's public image and the morale.

The fresh dismissal of senior officers should be seen in the broader context of the increasing influence of General Raheel Sharif in the country's politics. Sharif has consistently been working on his brand for several months. He does not seem to be sufficiently satisfied and content with his current image. He feels under-appreciated. He still faces an identity crisis that he keeps struggling to overcome. He wants to be recognized as the great army chief who led a decisive battle against the Taliban and eradicated religious extremism from Pakistan. In an earlier dramatic announcement this year saying that he would not seek an extension for his term as the army chief, Sharif tried to establish his brand as the selfless general who would not seek more power in spite of being fully capable of doing so. Now, Sharif has presented himself as the tough guy who will investigate corruption in the army.

Well, Sharif cannot simply hit and run. If he intends to investigate corruption in the military, his retirement later this year would not take this newly initiated process anywhere. Therefore, fighting corruption could actually be a great pretext for Sharif to prolong his stint as the army chief. Holding powerful army officers for their corruption will certainly trigger tremendous resistance from some senior officers. General Sharif will need great allies and confidants within the army to pursue this important mission. It should have been done much earlier. The more he digs into the annals of corruption, the more enemies he will inevitably make among his fellow officers. The real challenge will come when he will be required to extend these investigations to retired officers and his own colleagues.

In Pakistan, corruption is often narrowly defined as making money through illegal means. That surely is a big part of it and General Sharif should work on that front but one aspect that urgently merits attention and action is the misuse of official power while dealing with the people of conflict zones. More than the millions and billions they have made, officers should be held accountable for sanctioning the killing of innocent civilians in several operations that could have otherwise been avoided had political solutions been employed.

In Balochistan, where many of these officers led the paramilitary force, the Frontier Corps, they engaged in excessive use of force, extrajudicial killings and torture of young Baloch students and political activists.

Army officers posted in conflict zones with massive military strength often find it tempting to misuse their authority, make poor judgments and forget the responsibility that comes with deployment. This is precisely what General Sharif must address. Furthermore, another aspect of 'corruption' that needs investigation is the connection between elements in the army and radical Islamic terrorist groups. The army chief must make it clear whether supporting Jihadist and sectarian groups is an official policy or this is happening because some insiders are making a fortune by establishing, tightening and expanding ties with the Jihadis outfits.

With the action against corrupt officers, General Sharif has opened the floodgates of questions about his retirement plans and also to what extent he intends to fight corruption in a country where the masses are poor but the generals are filthy rich.