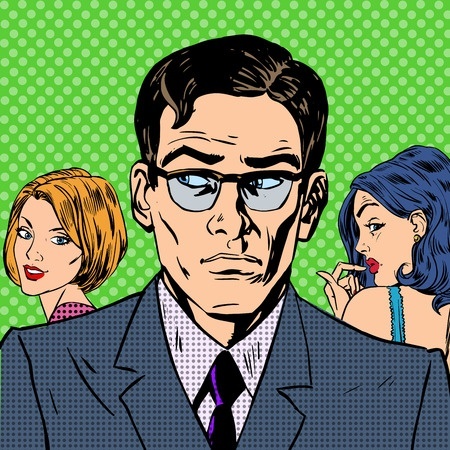 About a year ago I started really getting into celery. Yes, those annoyingly crunchy stalks that make it hard to hear yourself think. Never in my life had I ever paid any attention to this stringy vegetable, but all of a sudden I couldn't get enough. I had to have it in my fridge at all times. My extreme fondness for celery has persisted and today I buy it in bulk and organic when I can find it. I don't know why I love it so much, I just know that it makes me happy and it's good for me so I eat it all I want.

My dog barks at skateboarders, but not bicyclists.

I used to buy my pants on the baggy side, now all I wear is skinny jeans.

Pretty much every guy I ever dated before age 30, I wouldn't touch with a 10-foot pole today.

My point is that we humans can be quite fickle. We change in the minutest of ways, on a daily basis sometimes, altered by the people and experiences in our lives--softened by displays of kindness or generosity, or made cynical by acts of selfishness or disrespect. We might undergo revolutions from heavy events, like losing a loved one, becoming the victim of a crime, or falling in love. And sometimes, well we just change our tastes for absolutely no reason at all. Our minds are capricious creatures. If The Raw Shark Texts author Steven Hall is correct in his assertion that every cell in the human body replaces itself over a period of seven years, that means there's not even the tiniest part of you now that was part of you seven years ago. Something to think about.

Maybe the phrase "I fell out of love" is just a dramatic way to say, "He's just not my cup of tea anymore. I changed my mind. I'm craving something else."

It may have something to do with a shared dream for the future that spiked off into two conflicting visions. Maybe somewhere along the way he stopped trying or taking care of himself. Or maybe she just doesn't give you butterflies anymore and you don't want to settle for anything less than butterflies. But inevitably there is always collateral damage, intensified around that word commitment: "You said you loved me. You promised to stay." There's a bad guy and a good guy. Heartbreaker and heartbroken. Rarely is a split mutual, and even then, it's bumpy as hell.

Couples who've been married a long time insist that falling in and out of love over a lifetime is just how it goes, and being fully committed means you hold on and ride out the ups and downs. While I don't think it's wise to head for the hills the very moment the magic fades without taking some time to assess, the fact is that every one of us has the freedom to take a different path at any given time. Feelings change. Visions for a shared existence morph as life builds upon itself every day. And the god's honest truth is that we get to choose who we spend our time with, whether it's picking the same partner every day or deciding to remain open to other romantic possibilities. Our life looks how it looks because of the choices we make, and if we aren't as happy as we think we could be, well, in the words of Bobby Brown, "It's my prerogative."

I'm not hating on marriage, or even just the idea of commitment (monogamy) in the present tense. But I try to avoid making promises for my future self. What if one were to pledge his undying devotion to a partner, but then three years into the "contract," things get bad, regrets camp out, he gets "the grass is greener syndrome" and just plain feels unhappy or unsatisfied with his partner... then what? Does he continue to wake up next to her every night out of obligation, even though he'd rather be somewhere else? Does he default on the contract by seeking comfort in the arms of another? Swallow the unhappiness and keep on truckin'? Lots of people do, and maybe they fall back in love with their partner somewhere along the way. But then again, maybe they don't, and instead collect resentments and fall asleep every night with pervasive thoughts of "what if." For the ones who listen to the doubt and leave, it may feel pretty awful for a while, but life is full of amazing people and connections happen everywhere if you're open to them. I've seen far too many friends suffer the fallout that comes with the "D" word, but in every single instance, that person became a happier version of themselves. Down the road, and sometimes immediately after a breakup, they discovered new strengths and abilities that lay dormant while their focus was on the relationship.

Philosopher Jiddu Krishnamurti says that love has no room for obligation. "When there is love, the word 'duty' disappears. It is the man with no love in his heart who talks of rights and duties, and in this country duties and rights have taken the place of love. Regulations have become more important than the warmth of affection."

How is it that you can speak for Future You, a person who doesn't even exist yet, by swearing that you'll feel a certain way tomorrow and the next day and the day after that? The dictionary says a paradox is this: "a statement or proposition that, despite sound (or apparently sound) reasoning from acceptable premises, leads to a conclusion that seems senseless, logically unacceptable, or self-contradictory." And so "forever love" is paradoxical, because no one is a soothsayer. You could say the same thing about commitment, because you're not Future You yet, so how can you swear who you'll be--let alone who'll you want-- tomorrow? Tricky, I know.

Let's say that the concept of commitment can be expressed with this statement: "I promise I will love you tomorrow and only you." Now, even though celery is my favorite thing on earth right now, I would be remiss to claim that I will love celery now and tomorrow and only celery. Of course, people are different than vegetables, but it illustrates my point. I've seen (and experienced firsthand) many budding relationships go from sweet, loving, affectionate, "forever" ones to very dark and hostile relationships in a matter of months. In every single one of these failed unions, the paradox of commitment came back to bite both lovers.

Whenever I hear the phrase "fear of commitment," I think "human being." It's in our primal nature to live in the moment, to relish in the curiosity and potential that an unscripted life affords. That being said, I wonder if some of the collateral damage attached to commitment could be minimized if we didn't equate the word with future expectations. What would happen if we respected ourselves and our partners enough to give us all room to grow in whatever direction we need, without worrying that if a partner chooses a different definition of happiness, it will equal killing ours? What if, at our commitment ceremonies and weddings, our vows went something like this: "I choose you today. I love you and I want happiness for you now and tomorrow, whatever that means." It's not the most poetic few lines, but you get the idea. If those promises of tomorrow aren't imposed on our partner from the get-go, perhaps we can feel more empowered to be true to ourselves instead of struggling with the pros and cons of obligatory couplehood when things go south. All I know is I want someone waking up next to me because they want to be there, because they chose me again that morning, not because of that conniving little word "commitment."

Regarding a solution for the paradox of commitment, I'll leave you with these simple yet elegant words from poet Thich Nhat Hanh:

"You must love in such a way that the person you love feels free."

More:
RelationshipsFear of commitmentDatingcouplessingles
Newsletter Sign Up
An essential daily guide to achieving the good life
Subscribe to our lifestyle email.
Successfully Subscribed!
Realness delivered to your inbox