The youngest of seven children whose parents are deceased, Colleen Haggerty chronicles about the coalescing of her adult siblings following the sudden brain cancer diagnosis of their single/childless 53-year old brother, the makeshift care giving they built along the way and her experiences with the surprising person who awoke from that fateful brain surgery.

The not knowing always seems the hardest part.

Will our brother, Kevin, awaken from his coma after the brain surgeon's 20 percent survival odds? Just how much havoc did the aneurysm, tumor and countless lesions wreak? Will he be able to move, walk, talk, remember, eat, breathe on his own?

The last thing our brother did before finding himself in the ER was come home from the gym and slur his words so badly that his friend called 911. Doctors found a mass in his brain, and off to emergency surgery he went. Biopsies indicated melanoma, likely from skin cancer he had treated several years ago, but now came back in his brain.

We watched in awe as Kevin awkwardly arose from his comatose abyss like a newborn hatchling squirming out of its shell. He literally squirmed in his hospital bed sheets, a baby song bird with glassy eyes and bald head swaying about, attempting to make sense of his unfamiliar surroundings rather blindly as his eyesight blurred from the surgery. His speech was high pitched and glacially slow, like a senile elderly woman or a child with a developmental disability, so innocent in its tenor.

His evolution from there has been pure magic.

Each day he moved and spoke a little stronger, words and thoughts expressed more clearly. Well, that part's relative. He did call me Jesus, as in, "Hi Jesus, thank you for visiting me today," and guessed my age at 6,000 years old. But he's conversing!

More than the physical improvements, an entirely new part of our brother was born from that brain surgery -- a person sourced from pure, unadulterated love, who had to tell all he came in contact with just how much they mattered and how deeply he loved them.

He had to make this abundantly clear to you, in no uncertain terms. He loves you.

It's as if this boundless love always lived inside Kevin, but his ego only allowed it to be expressed through sarcasm.

Before the surgery, Kevin was a snarky, cliché, gay man. Think Judy Garland albums, Bette Davis movies, and impersonating celebrities as if they were his chums. Love from the old Kevin was expressed through humor, often vocalized in a high-brow Thurston Howell, III, voice.

So, imagine our surprise getting an entirely different brother, one who leaps into our arms when we visit, hugging and squeezing us like a kid does a favorite doll as he announces how much he loves us.

As Kevin improved, the siblings-as-caregivers decided to throw a family reunion at the local brewery (don't judge). Even our brother, Kirk, flew in from Germany, where he's lived for decades. Kevin's relationship with his only brother, numbers four and five among The Seven of us siblings, was tumultuous -- polar opposites who pushed each other's buttons in the worst of ways growing up.

But, that afternoon in the brewery gardens, some 15 years since they'd last seen each other, they embraced, brother to brother, unleashing gratitude and love never before shared. 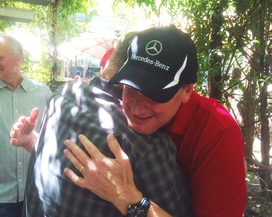 It was the kind of hug that punctuates the most important moments in a life.

This precarious time in our lives has also been marked by song. We sing, and sing some more, as a way for Kevin to exercise his memory. He recalls lyrics, melodies and harmonies, his favorites being Broadway show tunes.

The social workers and nurses visiting his apartment weekly look at us like old Catskill hacks as we perform classics with jazz hands in Kevin's living room to show off his improvements. It's been a blast being around this guy!

Reading is still a challenge for him. But his insatiable humor beats out frustration, as even memory flash cards offer comic relief. When Kevin identifies an image of a goat and when we ask, "What does a goat say?" He pauses a beat, unsure, and then utters confidently, "Oh, horrible things. Just awful!"

A clever punch line always trumps the correct answer in our family.

Despite his vast improvements, there is a dual track playing out. He still has cancer, the melanoma like a weed that won't go away despite treatment, and now he has a spot on his lung.

It's like living in two universes simultaneously -- the positively uplifting one filled with hope and joy, and the dark shadow of medical reality attempting to snuff out this brilliant spark of life.

Recently, a shaman had told me rather cryptically that I get to believe in dragons. The rest was left to me to interpret. It sounded like nonsense, a fairy tale of suspended reality... until I realized that I was truly practicing the art of suspended reality, choosing to savor and embrace every moment with my brother over imminent heartbreak.

So many scenarios in our life hold both lightness and darkness. It's up to us where we choose to put our energy and what we choose to believe.

After all, dragons are real. They exist in my parallel universe.

A version of this story also ran on Medium.com

Voting Made Easy
Register to vote and apply for an absentee ballot today
Register now
More:
healthy livingbrain cancercancer WellnessFamily
Newsletter Sign Up
The essential guide to taking care of your mind and body
Subscribe to HuffPost’s wellness email
Successfully Subscribed!
Wellness delivered to your inbox