I've been banned from all the online mommy message boards since the end of 2009 -- Yoube.mom.com, Urbanbaby.com, even the seemingly benign Babycenter.com chat forums. To be clear, I've banned myself, with the second opinion of my husband, who, at the height of my most obsessive parenting days -- also, not coincidentally, at the height of the H1N1 panic and at the end of my second pregnancy -- begged me to stop checking the constant stream of updates that anonymous mothers, some nearly as paranoid as I was, posted day and night. --Anyone in the tri-state area find the vaccine? --Moms to kids with swine flu -- what are the first symptoms?! --8 kids in my son's preschool out with the flu, one in ER!

My obsessive mind feasted on links to the latest CDC reports and URLs of CNN articles that used the most terrifying word of that year -- pandemic. I began checking the message boards every day, then every few hours, until finally, I had my laptop open all the time. I only had to click refresh. My terror snowballed and I responded with my own posts -- my OB won't give me the swine flu shot! Anyone know where I can find it? Willing to travel a few hours to a clinic outside the city. 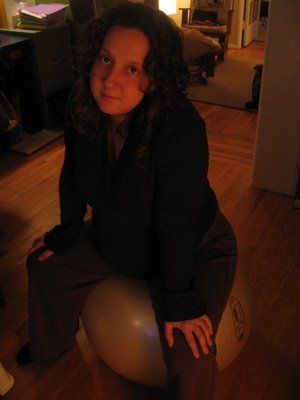 Me, in labor, on the infamous birthing ball

I've been obsessive-compulsive since I was a child flipping light switches (always in sets of five) at my parents' home -- a ritual that brought me comfort, and a brief reprieve from my fears that something terrible could happen at any moment. Until I left home for college, I was able to contain my obsessions, just enough to make them almost invisible to anyone but my family. But with college came new social stresses, and by the end of my senior year, I'd accepted that the dizzying panic attacks that accompanied my obsessions were making life unbearable. With SSRIs, I was finally freed from the soundtrack of unreasonable but terrifying what ifs that had looped in my mind since I was a child.

I could have remained medicated throughout pregnancy. Many women do, and with no apparent side effects to their children. But obsessive-compulsive worriers are not, by nature, risk-takers, and because I had already Googled studies of birth defects as related to the use of SSRIs, and since my psychiatrist had urged me to stop medication, I weaned myself off meds in the months leading up to both my children's conception.

The what ifs returned with a vengeance. My obsessions were louder, darker. So much was at stake, after all -- there was a baby to obsess over. And even if that baby was the size of a lima bean, and tucked deep within my body, it was a life. So important. So vulnerable. In my first pregnancy, I was able to work through the anxiety that appeared as soon as the drugs left my system, worsened by the withdrawal I experienced, and the fact that I had morning sickness all nine months. But, three years later, by the middle of my second pregnancy, it would be clear to all -- my husband, parents, in-laws and friends, even my obstetrician -- that my obsessions were nearly unbearable.

That spring of my second pregnancy, the H1N1 cases were multiplying. My mother, prone to obsessing herself, called to tell me about the high school class, who, after returning from a spring break trip to Mexico, had all fallen sick with what they were calling "swine flu." Don't eat any imported fruit from Mexico, my mother advised, in the kind of irrational rationalizing that would infect so much of the country as the flu hysteria heightened.

I was in my second trimester and called my psychiatrist in tears, apologizing for bothering him, and for crying (I am not one to shed tears in front of anyone but my husband). I asked for an appointment immediately to discuss going back on medication.

My husband took off work so he could accompany me -- he was, I know now, deeply worried about me -- and we sat side-by-side in the tiny dim-lit office holding hands. I explained to my psychiatrist that my obsessions had quadrupled, grown in frequency and intensity. As much as it embarrassed me, I admitted that I was consumed with the fear that my family was going to die from swine flu. I may have even laughed at myself as I confessed this (crazy me!). Awareness of the irrationality of one's fears is common in "obsessive-compulsive disorder with insight" -- a blessing because you don't completely lose sight of your rationality, and a curse because the obsessing is mixed with a potent dose of self-loathing. I spent most of my second pregnancy, and the lucid medicated months after my daughter's birth, apologizing to what felt like everyone.

After listening politely to my fears, my psychiatrist said, The choice has to be yours, and then read statistics from a massive bound book as thick as three Bibles. The numbers were from studies of women who had taken SSRIs in pregnancy, and the resulting effects on their babies. I was so upset, my body trembling with anxiety, that it was almost impossible to absorb the numbers he read aloud, but I heard pulmonary hypertension at birth and possibility of seizures and newborn may experience withdrawal, and although, later, I'd realize the probability of side effects was small, an obsessive person only needs a .0001 chance to plant a seed of fear in their mind. I stayed off medication.

By October of that year, with only a month to go before my due date, I had washed my own hands raw, quarantined my 2-year-old son in our apartment, gone through boxes of Lysol wipes, and made every one of our visitors wash his or her hands. If I knew a friend was coming over, I'd stop him or her at the door of our apartment with the economy-sized hand sanitizer pump, the 8-month sized globe of my belly barring their entrance, and ask, with a self-deprecating laugh so it was clear I knew I was acting crazy, if I could "degerm" them.

I spent my final visit to my obstetrician that November in tears, alternating from begging him to perform a C-section (already medically necessary) a week earlier than planned to apologizing for the ridiculousness of my request. He pleaded with me, one last time, to go back on my medication, and when I refused, detailing my psychiatrist's warnings, he became furious, threatening to call my psychiatrist and tell him off. I convinced him not to and he rescheduled my C-section two days early.

A few days after my daughter was born, I took my first dose of Zoloft, the SSRI recommended for nursing mothers since the medication does not cross into the breast milk. While medication is not for everyone, for me it has been a miracle. Zoloft has allowed me to enjoy my life with my children -- even the toughest days. It has given me the clarity I needed to write about difficult (and joyful) moments of my unmedicated (and medicated) parenting experience -- material that inspired my novel, Cutting Teeth.

My obsession with protecting my family from illness, and delusional belief that I have any control over the matter, lessens each year as my children get bigger, sturdier, further from the tiny mewling creatures my husband and I treated with such care in those first days, as if they were made of the most delicate glass. But still, every year I make our family flu shot appointment at the pediatrician weeks before the other mothers in our neighborhood, where many parents do not vaccinate against flu, and some choose to delay or avoid altogether the more controversial vaccines like MMR. When the signs in front of the drugstores pop up around the time school resumes -- Flu shots available, Do what you can to avoid the flu -- our family of four squeezes into one of our pediatrician's small windowless pastel-painted exam rooms and we get the spray, one by one.

We laugh about it now. Me, my husband, my parents, my in-laws, even my closest friends, all mothers to little children, like me. Remember when you almost lost your mind over swine flu? Now it is a story to tell when my husband and I go out with another couple with children, where over the comfort of food and wine, we chuckle over how terrified we were in those earliest and most vulnerable years of new parenthood. There are details of that cold autumn I tell as a punch line of sorts -- how I forced both sets of grandparents to drive to out-of-town clinics to be vaccinated, how I made my husband change out of his work clothes every night after his subway ride home. We laugh, and our friends nod in commiseration, which feels, for a moment, like a forgiveness of sorts. Still, I find myself apologizing now and then, despite the years that have passed, because I haven't completely forgiven myself.

More:
Parenting ssrisFluppdparanoia
Newsletter Sign Up
Raise the kind of person you'd like to know
Subscribe to our parenting newsletter.
Successfully Subscribed!
Realness delivered to your inbox

Author of "Cutting Teeth, a novel"