When my sister sent me the text last Thursday night, I had no idea about The Dress. Even though I use social media on and off throughout the day, I had shut down my laptop several hours earlier and managed to stay offline, not even peeking at Facebook on my phone during the pre-dinner witching hour, as I am sometimes guilty of doing.

If I had so much as glanced at social media that afternoon, I would have seen the seemingly instantaneous explosion of viral insanity that was #TheDress, and it all would have played out differently. But I didn't, and so when my sister asked me what colors I saw in the dress, I shot back a quick reply without a clue what it was all about. 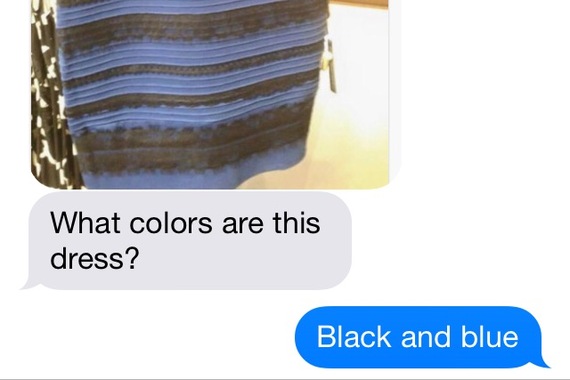 As I cleared the dinner dishes, my husband got a similar text from my sister's boyfriend. It seemed we'd been dragged into a couple's debate over a dress -- or so we thought. Bryan said the dress was blue and gold (which puts him, we later learned, into a rare subcategory of people that make up just 6% of the dress-viewing population) and I told him he was crazy, that the lace was obviously black.

That's when we brought the kids into the debate. "It's white, and kind of orange," said my 6-year-old daughter. "Orangy-yellow? Gold-ish."

My 4-year-old son agreed. "White and yellow," he said firmly.

"White?" I challenged. "You mean blue." I zoomed in on the picture on my phone, focusing on the flat panel of fabric near the dress's shoulder, a swath of deep indigo unobstructed by lace or pleats. "This is blue."

"Look right here," I insisted, pointing to the screen. "This section. You don't see blue?" I felt flustered, unsure what the joke was and why I was at the butt of it. I felt oddly unhinged, and definitely irritated.

"Are you joking with me? Are you doing this on purpose to be funny?" I asked. She is, after all, a bit of a prankster sometimes. Was she testing me? Or pushing my buttons to get attention? It didn't make sense.

"Mommy, NO. I promise! I see white," she pleaded. Her round eyes begged me to believe her. We looked at each other then, locked in disagreement, each of us searching the other's face for signs of acquiescence and finding none. You're wrong, my expression told her. I don't understand you, and you're wrong.

The next hour passed without mention of The Dress and we went through the familiar choreography of a weeknight winding down. I put the baby to bed first, my husband read to our 4-year-old, and I crawled into bed with the oldest for the final act. I read Anne of Green Gables aloud and we talked about the following day and weekend ahead. I kissed her goodnight, shut the door, and came downstairs to find my husband leaning against the kitchen counter looking at his phone.

"So, this whole dress thing...it's, like, a THING," he said. "It's all over the Internet, and some people see white and gold. Others see blue and black."

Some people see white and gold. Others see blue and black.

In our family, we do our best to respect differences, to celebrate diversity. We teach our kids to listen to one another's opinions, even when they differ from their own, and to engage in healthy debate when they feel strongly about something. We tell them that all beliefs are okay, and that the world is more interesting because there are so many different ways to view it. We ask them never to make someone feel less valuable because of who they are or what they believe.

And yet, I saw blue and black. I didn't know it was a photoshopped Internet sensation. I just knew I was right, and she -- my 6-year-old -- was wrong. We weren't talking about fifty shades of periwinkle here, or debating the definition of indigo -- we saw two completely different things. In that moment between math homework and dishes and a thousand text messages and 42 other things going on in the background, I made exactly zero space in my brain for the possibility that we might both be right. And I let her know that.

"I'll be right back," I told my husband.

I tiptoed upstairs and opened her door. "It's just me," I whispered. "I have to tell you something. You know that dress? It's kind of like a magic trick, an optical illusion, and there are tons of people who see white and gold, just like you do. And some other people see blue, like I do."

"I'm sorry I made you feel wrong," I continued. "I couldn't understand why you didn't see what I was seeing. It made me feel like I was crazy. But you know what? We are both right. It's okay to see things differently. I love you."

"Love you, too, Mommy," she said, rolling over into a nest of blankets and stuffed animals. "'Night."

We're both rather fond of absolutes, she and I. I'm a firstborn, and she is my firstborn, so we come by it honestly. We cling to rules and like figuring things out. And while these first half-dozen years have afforded me the position of mostly passing my worldview on to her, the years that remain will be, necessarily, much less one-sided. She is bright and brave and opinionated, and I want her to be so. I want her to give voice to the way the world looks to her, even when it goes against the grain or rubs right up against the edge of status quo. More than anything I want her to feel like that voice carries weight, has value, and can make things happen.

I want her to see white and gold. I want her to tell me about it, to show me what the colors look like through her eyes. I don't ever, ever want to make her feel wrong for what she believes, or less-than for seeing it differently than I do. And when in the years to come we come to a point of impasse, when the white-and-gold she sees cannot reconcile with my blue-and-black point of view, I don't ever want to shake my head and walk away. I want to be able to look her in the eyes and say, "You know what? Maybe we're both right. It's okay to see things differently. I love you."

Cute Kid Notes
More:
ParentsTheDress
Newsletter Sign Up
Raise the kind of person you'd like to know
Subscribe to our parenting newsletter.
Successfully Subscribed!
Realness delivered to your inbox