I've been thinking about how my marriage has changed since having our second baby. We are more tired, of course. There is more laundry to do, more dishes, more baths to give, less of us to go around. We are in man-to-man defense mode most of the time.

We split the responsibilities as best we can. We negotiate time away and we negotiate the chores and we try very very hard not to complain.

It's a cycle, and it never stops. We're two ships passing in the night, half asleep with blue-eyed children in our arms. We're learning the ins and outs of our own exhaustion, our own debilitating frustration, our own shortcomings as parents. We're learning to read each other better, to understand the different types of tired, to notice the I-can't-do-this-anymore looks on each other's faces.

Right now, parenting feels like a giant relay race with no end in sight. We're simply running different stretches at different times, but the race never stops. We're taking turns and running till it hurts, until we need a break, until we're running so fast we can't breathe. And then, when we simply can't go any further, we tag each other.

And then it's my turn and I'm running and I'm not stopping and I'm pouring the Cheerios and cleaning up the yogurt and breastfeeding and trying not to yell. I'm behind on everything: work, emails, gifts, thank you's, meal planning, laundry, 40 pieces of unopened mail. I'm reading books and doing finger puppets and changing diapers and giving time-outs and I'm going going going with sweat dripping down my face, heart pounding out of my chest, and then it is 6:07 p.m. and my knees are about to give out.

And then he's running and he's not stopping and he's wrestling and playing catch and tickling baby feet and giving baths. He's exhausted from his day, his job, his stress, the overwhelming burden and privilege to provide for a family of four. He's warming bottles and reading more books and doing dishes and he's going going going, fire in his lungs, and then it is 8:24 p.m. and his legs are done.

We ignore the piles of mail, the to-do's that aren't done, and opt to collapse on the couch instead. He finds the Netflix binge du jour while I set up my breast pump and we watch TV with the familiar sound of milk filling bottles in the background.

We go to bed too late, as always. He sets the alarm and I turn on the oscillating fan, and our bodies melt into the mattress side by side. We rest, for just a moment, before the next stretch of running, which comes only a few hours later at 3:02 a.m.. Every single night at 3:02 a.m. I get up and start running, because it's my turn, while he dreams until 6:47 a.m., and then it's his.

Back and forth, round and round, we're on the hamster wheel that never stops. We're learning to love each other in stolen glances, in midnight whispers, in hamstring stretches and water breaks. A lot of the time it feels like we're parenting separately, running separately, resting separately. I never knew co-parenting could feel this isolated, this exhausting, this lonely in our own house. It feels like we're running in two different directions with two different kids, doing two different things, only stopping occasionally to check in with each other: Are you OK?

We're seven months in and I still feel like we're in survival mode, like this is harder than it's supposed to be and we never have enough help and how is my baby still not sleeping through the night? I think a lot of people would say that the transition from zero kids to one kid was The Hardest, but my truth is the opposite -- zero to one was a breeze compared to this. And zero to one was not a breeze. I think about all the families with three young kids, and four young kids and five young kids, and I'm just dumbfounded. How are they not drowning?

I have to believe that this is a phase, that this too shall pass, that pretty soon, things will click into place and parenting two young children won't feel so stressful and chaotic and physically draining. But the truth is, I really miss running together. I miss parenting side by side.

We'll get back there, eventually, I think.

For now, I just need to keep reminding myself that even though we're not always running at the same time, we're still running the same race, and we're on the same team, chasing the same prize, and damn -- there's nobody I'd rather relay with than him. 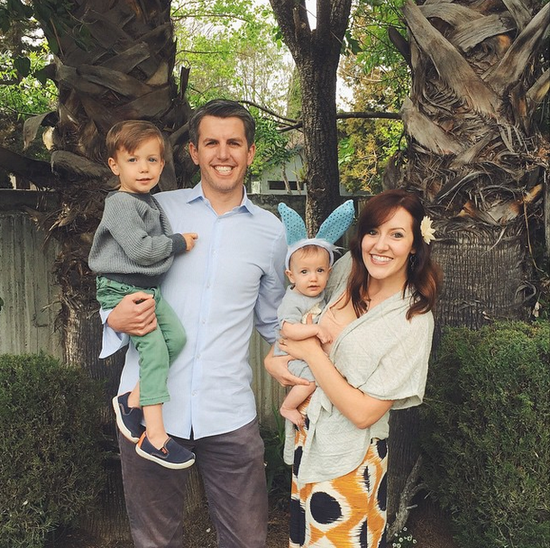 More:
Toddlersco-parentingparenting adviceparents-toddlersParenting
Newsletter Sign Up
Raise the kind of person you'd like to know
Subscribe to our parenting newsletter.
Successfully Subscribed!
Realness delivered to your inbox