In many ways, my childhood was completely conventional: my parents raised me and my younger brother in a two-story house in suburbia and sent me to public schools. My mom played team tennis and was president of the PTA; my dad was an attorney and came home every night from the office with a special treat he would pick up for me at 7-Eleven on the way home.

But just because my childhood seemed conventional doesn't mean it was, nor does it mean that my parents were not layered and complicated people. Now that I am a parent myself, I see how much that is true. I feel lucky to have had the parents I did and completely convinced that they not only influenced who I am, but also how I parent my own four children.

So, in honor of Mother's Day, here are five things I learned about being a mother from my own generous, loving, and sometimes completely crazy mom:

1. Television isn't going to kill my children or make them stupid.
You could say my parents like television: I grew up in a household that boasted 22 -- yes, that's twenty-two -- television sets. In fact, I had cable television in my bedroom from the time I could talk. I watched so much television with my parents when I was a child that some of my earliest memories are of Johnny Carson (I was also an insomniac) and St. Elsewhere, and some of the first writing I ever attempted involved using my gray handwriting paper -- the kind with aqua blue dashes across the page to help you keep your letters straight? -- to write my own Cheers scripts when I was in third grade. It is immensely comforting to me now to remind myself that I grew up on this steady diet of movies and television and was still a good student who graduated with a degree in English from an Ivy League university. I say that not to boast, but to reassure: television, and copious amounts of it, did not ruin me. Even possibly inappropriate television did not lead me astray or rot my brain. So when my kids insist on watching SpongeBob, I try to remember that it's not going to kill them. Then I make them turn down the volume, because it might kill me.

2. Have a sense of adventure and be ready for anything.
My mom loved (and continues to love) Elvis Presley. She was one of those fans. When she heard of his death on the radio, she packed a bag, dropped me at the babysitter's house, and caught a flight to Memphis. She called my father from the Memphis airport to tell him where she was and to pick me up on his way home from work, and she stood in an epic line at Graceland, because she was going to go to Elvis's funeral. Of course she was going to go to Elvis's funeral. She regularly drives to the beach just to put her toes in the sand, because it is her favorite place. And once, she and I drove across the country using only the USA Today weather map as our guide. My mom's bold approach influences how I show the world to my own children. She taught me not to be afraid and not to let anything stop me from having an adventure, and that is how I am trying to raise them, too, which is harder than it sounds in a post-9/11 world. But I have to try.

3. Be passionate and love out loud.
She loves Elvis and the beach, but I can list so many other things that my mother also loves dearly: chocolate of all kinds, anything white eyelet or lace, buttercream frosting, Rod Stewart, Christmas trees, white daisies, French memo boards, Krispy Kreme doughnuts, the Florida Gators, unsweetened ice tea, American Idol, gummy peach rings, Les Miserables, guacamole. My mom loves big and large. Because she is so open about what she loves, I feel like she allows herself to be really known, which is in itself a gift. I try to share the things I love with my children, too, to let them know who I am and what inspires me, thrills me, and comforts me. If they can someday list the things I love -- the quirks and passions that make me who I am -- I will know I succeeded in forging a bond with them that will, I hope, encourage them to open up to others themselves.

4. Don't be afraid to make a fool of yourself.
When I was growing up, if anyone turned on Bob Seger's "Old Time Rock 'n' Roll" or Rod Stewart's "Do Ya Think I'm Sexy?", my mom would instantly bust out into full-on dance moves... no matter where we were. As recently as this past winter, she jumped on a stage and danced with dueling pianos at an event, stone-cold sober. My mom is not afraid. She doesn't jump out of airplanes or fight crime in the streets, but in her own way, my mom performs acts of bravery: she is not afraid to look crazy or to be vulnerable, and in the process, she allows all around her to feel more at ease and to have more fun. I can be too guarded or too afraid to embarrass myself. But my mom has been a role model when it comes to reminding me of the importance of vulnerability. I sometimes marvel at my children's lack of self-consciousness, and I push past my own insecurities to encourage them to be who they are, always. My mom has shown me, repeatedly, that letting our guards down is what builds connections to other people.

5. Talk to strangers.
My mom could talk to a tree stump and know its life story in an hour. She is relentlessly interested in other people, she's endlessly empathetic, and she genuinely cares about everyone. More than once, I have had to stop her, mid-elaborate, emotional story, and ask her whose story she is telling me. Inevitably, it is the story of her hairdresser, or her hairdresser's child, or the cashier at Best Buy, or my sister-in-law's best friend's neighbor. I'll be honest: I don't have my mother's patience, and I sometimes feel too overwhelmed with my own stuff to get involved with every stranger I meet on the street. But what my mom demonstrates with her intense curiosity about other people, and what I hope to do as a mother as well, is to convey the message that every person is worthy of our time and our interest -- that every person has a story. We only need to take the time to listen to those stories to learn from the people with whom we share our communities, our schools, our cities, and our planet.

Looking at this list, I see a common theme: my mother refuses to let fear hold her back. She was a parent who didn't wring her hands over screen time; she makes things happen; she loves fiercely and openly; she dances no matter who is watching; and she lets people know her and wants to know them, too. Do we agree on everything? No. Do I believe her when she says I "just potty trained myself" and she therefore does not understand why it's so hard for me to potty train my children? Not so much. Despite our differences, though, I am aware now more than ever just how important her influence has been on my parenting.

But before they can ask: The answer is no, kids. You still can't have cable television in your bedrooms. 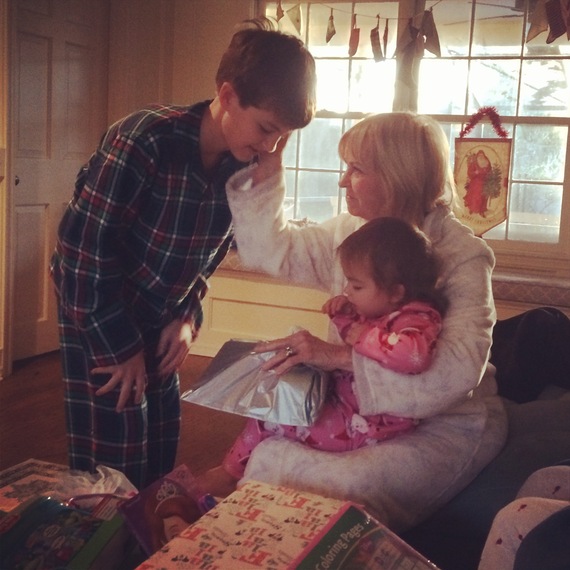 My mom with two of my children on Christmas morning, loving large.

This post is part of HuffPost Parents' Mother's Day series, exploring the lessons our moms taught us about parenting.