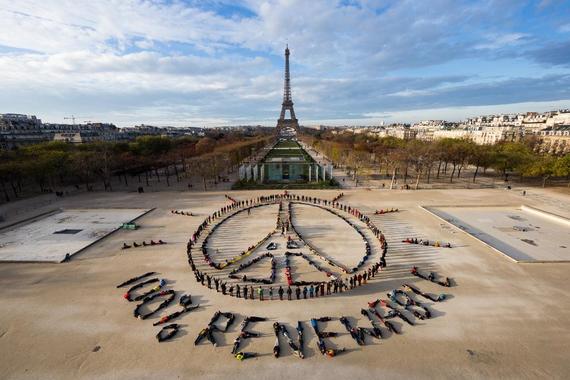 As negotiators hammered out the details of the new global climate agreement, renewable energy leaders were present in Paris en masse, developing alliances and partnerships to continue building a new energy economy based on renewable energy.

For the first time at a UN climate conference, renewable energy took center stage during the so-called "renewable energy track." Dozens of events were held, culminating with Energy Day on December 7 in the context of the Lima-Paris Action Agenda. As one participant noted, "the negotiations are focused on the problems of climate change; here in this room we're dealing with solutions."

There was a red thread that ran through every discussion, and it was confirmed by virtually every speaker from the renewable industry, leading businesses, and governments (rich and poor alike): renewable energy is the preferred choice, here and now. It is reliable and cost-competitive: good for the climate, good for jobs and good for communities.

Take RE100, for example, a global business initiative whose members have committed to sourcing 100% of their electricity from renewables. Fifty three of some of the world's largest companies are now participating, with more coming on board all the time. Google, one of the latest to join, accompanied its announcement with "the largest, and most diverse, purchase of renewable energy ever made by a non-utility company." Their reason for doing so? "These contracts not only help minimize the environmental impact of our service--they also make good business sense by ensuring good prices."

Consider the Manila-Paris Declaration, signed at the start of the conference by 43 of the world's most vulnerable countries, which called for the Paris agreement to require 100% renewable energy production by 2050. They did so in full recognition that this provision would apply to not only to wealthy countries, but to themselves.

And then the mayors came to town. On 4 December, 1000 mayors and local leaders signed the "Paris City Hall Declaration" committing to "support ambitious long-term climate goals such as a transition to 100% renewable energy in our communities, or an 80% greenhouse gas emissions reduction by 2050."

Though the Paris conference is over, we predict the "100 percent renewables" trend has only just begun.

How important is R&D to accelerating the transition?

This issue garnered a lot of attention in Paris. Several leading countries launched Mission Innovation, recognizing that "[a]ccelerating widespread clean energy innovation is an indispensable part of an effective, long-term global response to our shared climate challenge; necessary to provide affordable and reliable energy for everyone and to promote economic growth; and critical for energy security."

And the Breakthrough Energy Coalition was launched by Bill Gates and other CEOs to foster innovation through "a dramatically scaled up public research pipeline linked to truly patient, flexible investments committed to developing the technologies that will create a new energy mix."

These initiatives will no doubt contribute to accelerating the clean energy revolution, particularly if geared towards up-and-coming technologies such as geothermal, tidal and marine power, and new system design for enabling 100% renewable energy - first for electricity, and later for heat and transport as well.

It is important to recognize, however, that new technologies are not needed to achieve the scale of CO2 reductions needed to address climate change, or to deliver reliable and affordable sources of renewable energy today.

Wind power is already the cheapest way to add new generation capacity to the grid in many parts of the world: Brazil, South Africa, and large parts of China and the United States to name a few. Solar PV costs have decreased 75% just since the Copenhagen climate conference in 2009. Biomass, geothermal, and of course, hydropower are all competitive in a growing number of markets in comparison with coal, oil and gas-fired power stations, even without financial support and despite falling oil prices (not to mention the approximately USD 500 billion per annum in subsidies to the fossil fuel industry).

As for reliability, according to Boris Schucht, CEO of 50Hertz (a leading grid operator in Germany):

"A secure electricity system and high shares of renewables are not mutually exclusive. 45% of the consumption in the 50Hertz grid area is already covered by variable renewables, making it a worldwide leading region today."

In our view, governments and industry should focus first on deployment of more mature, existing renewable technologies such as wind and solar PV that are already proving their effectiveness in delivering massive amounts of safe, clean, CO2-free and sustainable energy. Doing so will reduce costs further, which in turn will lead to even greater deployment.

The launch during COP 21 of the International Solar Alliance, an initiative by the Indian Prime Minister including 120 governments, and the Global Solar Council, representing over 1000 companies, are examples of this maturity and opportunity.

If there were any remaining doubts about the dramatic impact that renewable energy is having - right now, today - on reducing climate emissions, the good news recently reported in Nature should put them to rest:

"Researchers at the University of East Anglia, UK, and the Global Carbon Project found that carbon emissions could decline by 0.6% in 2015, a departure from a decade of growing 2.4% per year. The research, published in Nature Climate Change, attributes the decline to a reduction in China's coal consumption as its economy slows and it moves to cleaner, renewable energy sources."

The renewable energy transformation is underway, and it is unstoppable. While the Paris Agreement in and of itself will not ensure global temperature rise remains well below 2°C, let alone 1.5°, the commitments made there will give a massive boost to the deployment of renewable energy. Clearly, the future belongs to renewables, starting today.