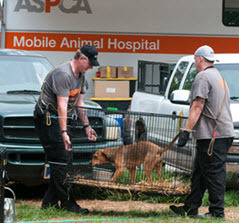 When most people think about animal rescues, they probably visualize professional responders and advocates coming to the aid of dogs, cats, and other animals in desperate and sometimes abusive situations. But this equation leaves out a third party that's absolutely crucial to saving lives: The community.

Participation by local residents is critical to complete the full cycle of animal rescue - from initial intervention to sheltering and care, and finally adoption. We don't always get to witness this full cycle in a single endeavor, which makes our recent operation in Moulton, Alabama stand out.

The case began in late June, when we assisted the Moulton Police Department in removing more than 300 animals -- including dogs and cats of all breeds and ages -- living in filthy and overcrowded conditions at the Lawrence County Animal Shelter.

When we arrived, we found several dead animals among live ones throughout the property, including puppies who'd died from untreated parvovirus. We also rushed a number of animals to an emergency clinic. Other animals were emaciated and suffering from medical issues including parvovirus, distemper and untreated wounds. Some were housed in small wire crates, and others in crowded enclosures where animals fought for limited resources and space.

It's disheartening to see a municipal shelter deteriorate into such a nightmare of neglect and suffering. The shelter's director, Bobbie Taylor, was ultimately charged with 17 counts related to animal cruelty. You can read more facts of the case here, including many local and state news reports.

The ASPCA has been providing medical attention and daily care for the animals in the weeks since their seizure. We also reunited a number of lost pets with their original owners, some of whom say they say they were denied opportunities to retrieve their animals from Lawrence County Animal Shelter in the past. This is particularly distressing given that re-connecting owners with lost pets is a primary function of a municipal shelter. 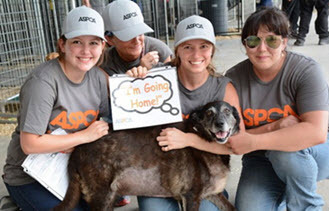 On July 25 and 26, we held a two-day adoption event for the animals, which was attended by well over 900 people from as far away as Tennessee and Georgia.

All adoptable animals were vaccinated and micro-chipped prior to the event, and the ASPCA made provisions for them to be spayed or neutered as well, at no expense to their new owners. The ASPCA is also helping to cover other veterinary expenses, including treatment for heartworm-positive dogs.

For the adoption event, the ASPCA also instituted a formal process, developed by animal behaviorists and shelter experts, to help ensure animals were going to safe new homes. The process included a detailed application form and mandatory meetings with adoption counselors to assess prospective owners' home environments as well as their capability to care for an animal, especially ones with special needs.

With each appropriate and successful match, an "adoption bell" was rung to share the good news. 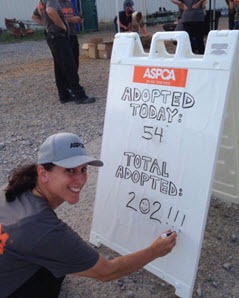 By the end of the weekend, 202 animals - including all of the cats - were adopted. The remaining dogs will be transported and placed with rescue organizations across the country to be made available for adoption. Some will be transferred to the ASPCA's Behavioral Rehabilitation Center, located in Madison, New Jersey, to treat the extreme psychological damage they suffered.

This adoption event was a vital part of the overall effort in Moulton, and its success clearly hinged on the participation of community residents ready to demonstrate their capacity for compassion.

We were not surprised by the enthusiastic turnout. In fact, there are compassionate people like this across the country, and it's critical to connect their compassion to causes that save and protect animal lives. Some people are already inspired and active; others are just waiting for a local event like this to capture their concern.

So what does such an active community look like? On Saturday we saw plenty of outstanding examples: 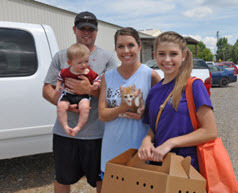 Moulton residents Brandon and Lindsey Myers, alongside their daughter Rayleigh, 14, and seven-month-old son Crimson, adopted two kittens - one orange-and-white, the other black. "We wanted to rescue an animal from this situation," Brandon told us. "I reckon my wife and daughter each picked one out... I guess we've got big hearts." 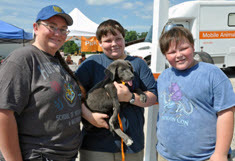 Baxter, a gray Lab mix puppy, was found in critical condition during the rescue and was rushed to the Moulton Veterinary Hospital. There he was treated for canine distemper, a contagious and dangerous viral disease. Baxter was adopted by Dan Mobley and Kristie Oldaker from Huntsville, Alabama, along with their sons Matthew, 11, and Noah, 10. 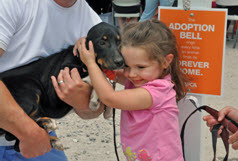 Bambi, a lab/hound mix, was adopted by Anna and Stephen McCollum and their daughter, Maddie, 3, of Trinity, Alabama. "We saw the news story and it touched our hearts," said Anna. "We wanted to do something to help these innocent animals." After Maddie rang the adoption bell, she gave Bambi this welcoming hug. 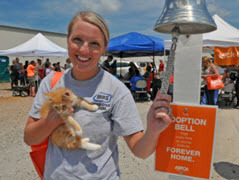 Sloan Kirby, a nurse and mother from Trinity, Alabama adopted Chloe, a tabby kitten. Chloe was one of more than 40 cats and kittens found in a filthy outdoor pen filled with overflowing litter boxes and surrounded by chicken wire.

This was a busy month in Moulton. But we were constantly motivated not only by the humane work we were committed to doing, but by the many hundreds of average people who showed up - and stepped up - to help us do it.