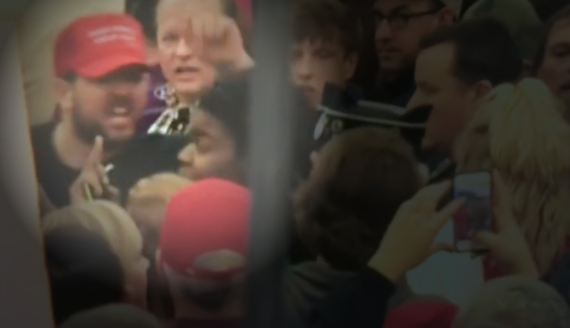 White "nationalist," Matthew Heimbach, yells at a woman at a Trump rally in Louisville, KY

Congratulations Republican Party, you got what you wanted.

After four decades of a campaign strategy that exploited the fears of white nationalists, you finally nominated your dream candidate: a fascist corporate psychopath who says what every hate-mongering white supremacist wants to hear, rife with so little moral conviction that he won't even disavow the Ku Klux Klan until pressured by the media. Donald Trump is on track to be the Republican candidate for president in 2016.

Is anyone surprised? Since Reagan first cemented the image of the "welfare queen" -- the stereotypical poor black American fraudulently collecting entitlements -- into the minds of middle America, the Republican Party has used rhetorical misdirection to blame blacks, Hispanic immigrants, women, homosexuals, and Muslims for every one of their policy failures. From such amorphous terms as "the 47 percent" to the straightforward attacks on "sluts" seeking birth control, Republican candidates have gone out of their way to implicitly assure white, straight, Christian, male Americans of their infallibility.

It's only appropriate that after America elects a black president, those most frightened by their country's "changing complexion" would respond by lashing out against the politically correct language that Republicans have used to conceal their true feelings. "Straight talker" is a Republican euphemism for "racist like me," and conservative voters are ready for a candidate who embraces the language that they only dared whisper under their breath or behind closed doors. Finally, someone else to point at and say, "well, he said it first. And I appreciate his honesty."

"Trump as an individual is not the problem here. Trump is the symptom."


Fittingly, Donald Trump's qualification as a political outsider is most evident in his inability to be subtle (read: politically correct) about his bigotry. Republicans have fostered a growing sense of Islamophobia since the September 11th attacks, but Trump was the first candidate to call for a ban on all Muslims entering the United States after the ISIS attack on Paris.

Former Arizona Governor Jan Brewer, who just gave her endorsement of Trump this week, once falsely claimed Mexican immigrants were taking Americans into the desert to behead them. But Trump was the first candidate to call a majority of them "rapists, criminals, and drug dealers" (a statement supported by no evidence whatsoever).

Between cheering on supporters who physically assaulted a Black Lives Matter protester, endorsing the 'passion' shown by supposed supporters when they beat up a homeless Hispanic man, or making comments that feed into negative stereotypes of Jews, Chinese-Americans, and the disabled, Donald Trump has turned your racist grandmother's senile ramblings into a legitimate political campaign.

But Trump as an individual is not the problem here. Trump is the symptom. Trump is the result of decades of rhetoric by a broken and misguided political party that set down the path of making white people afraid of outsiders and then forgot to rein in the momentum once it achieved short-term political success. The Republican Party has taught us that when you exploit fear for political gain, you plant a dangerous seed in the minds of the most heavily armed and hardly educated Americans.

The evidence is clear: violent backlash against calls for racial equality, a rise in right-wing extremist attacks, a major political party's about-face on immigration policy, the disenfranchisement of millions of black Americans, and the radicalization of Muslims in America and overseas who face public policy and rhetoric targeting them for their beliefs. Racism is real, and our benevolent attempts to relegate it to an uncomfortable topic at Thanksgiving dinner have been overcome by a political machine that recognizes that emotion -- dare I say it? -- trumps rationality.

The party of personal responsibility is now faced with its most daunting task: take responsibility for the monster it created and save America from a man so regressive that he threatens to return us to an age of internment camps and public lynchings.

"Defeating Trump is not enough. We must defeat his ideas and the political machine that fosters them."


It's also time that we as Americans take responsibility for allowing this to persist as long as it has. We can't just roll our eyes when someone turns a racial group into a monolithic entity, replete with all the negative characteristics they learned from the evening news. Black and Hispanic Americans are not lazy criminals, Islam is not a violent belief system, empowered women are not sluts, and Donald Trump is not a legitimate politician.

The "silent majority" of male white supremacists likens themselves to a repressed group facing persecution just because "kill us some negros!" isn't an applause line at stump speeches anymore. We need to make it clear that they should REMAIN silent -- the real majority of Americans support racial, sexual, and religious equality, and we will speak louder for social justice than they can for segregation and bigotry.

We have an obligation to protect this country from itself. I know many of my friends understand the gravity of Donald Trump winning this nomination. I also know many Americans are blinded by the "straight talk" of a man who speaks to their fears. The Republican Party has already begun the internal damage control, but they're 40 years too late.

Defeating Trump is not enough. We must defeat his ideas and the political machine that fosters them. It is now on us voters, the greatest force in American politics, to enable the victory of a progressive executive agenda for another four years and deal a strong rebuke to the forces of hate, fear, and racism in America.