Six Junes ago, I read Justin Cronin's post-apocalyptic thriller, The Passage, and I was blown away. During my read I was amazed by the sheer volume of events and ideas he could write about, as well as how well he could do it. The story has a large cast of characters and it jumps back and forth in time, right up to the edge of confusion, yet he manages to keep all the balls in the air. We quickly come to love his characters and fear for them as virals--humans who have been transformed into vampires by a rampant virus--swarm America's cities and leave nothing but desolation in their paths. They literally rip the country to shreds, turning it into a wasteland in which few survive. And the ending? Well, it was so good that I was furious with Cronin. He left me with a two-year wait until the next book in the series.

The Twelve, its sequel, arrived a few months late, in the fall of 2012, but in the end that was all right. Instead of picking up where The Passage left off, it tells a different part of the story. It didn't pack the same wallop, but it was a solid read in which the bloody attacks of the virals were replaced by an equally bloody political climate in their aftermath. How will we survive? Who will lead? Will the virals return? If The Passage was a book about survival in the face of biological monsters, The Twelve was a book about survival in the face of political ones.

Now comes the finale, The City of Mirrors, which I devoured the way Cronin's virals devour any human in their path. 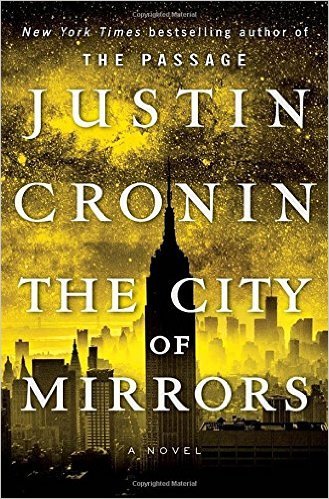 Where The Passage was a brilliantly plotted, solidly written thriller, The City of Mirrors is poetry. Thrilling in every way it has to be, but poetry just the same. Again and again, I found myself anxious to read faster, yet also hesitant, knowing I'd be smarter to take my time and relish the writing. This is a novel that requires focus, that begs for it and deserves it. The writing is sumptuous, the language lovely, even when the action itself is dark and violent. This may appear to be genre fiction, but it's literature, for while there is the surface action and plenty of it, laced with brutal, bloody violence, there is also a brilliant emotional core to all of this.

Like the two before it, the new novel jumps back and forth in time, deconstructing a breathtaking narrative that spans 1,000 years. We learn about the events that led up to the appearance of the virus, and we also learn about what happens after the human race is all but destroyed, leaving North America human-free, its purple-mountain majesty uninterrupted by, well, us. As in the first two books, the last surviving humans (whose numbers dwindle with every turn of the page) try to make their way through treacherous territory of the sunbaked west, most of the action centered in what used to be Texas and its gulf coast.

Back in a 2010 interview, I asked Cronin about the massive leaps in time he takes. Did he worry that readers wouldn't go with him? "I think a book needs to be constantly interesting by changing the terms," he said, "and it's actually a good thing when a book does something completely unexpected. But you do need to have faith in the writer. That there's a reason for it. It's not arbitrary. You're actually trusting the reader, in a good book, to do a lot of the work."

The City of Mirrors asks us to do some more of that work. We need to remember the other two books and how different they were, then leap with Cronin into this one, which is as different from the first two as the second was from the first.

So, in this book we learn about where the virus came from--and what brought it about. Like most other events in human history, the impetus was emotional, even innocent. It grew from, of all things, love. All of the violence of the first book, which was considerable, and all the political maneuvering of the second, which was just as bloody, and all the attacks of the third, in which the virals are smarter, even sinister, all brought about by the most basic human emotion. Not to survive, but to love and be loved.

I didn't see that coming.

The characters' relationships here are complex. Old friends return, new friends are made. Throughout, there is a real sense of dread as we wait for the inevitable. When the virals appear, midway through the book, there is almost a collective exhale, from both the characters and the reader. The viral attacks in this third book are blood-soaked, merciless massacres, and even the most ingenious human defenses are no match for the monsters' fury.

In The City of Mirrors, Cronin spends a lot of time on the virus's origin story, on the emotional inspiration that led to it. It really is a simple coming-of-age story. Young Harvard students learning how to make their way in the world. It's their passions and disappointments that light the path to the virus that ends it all. Toward the book's end, the plot leaps into the far distant future, where we get a taste what will become of the human race. The threads of his earlier books are woven together--not neatly, but expertly, with just enough closure to satisfy, yet also enough ambiguity to tantalize. There's a mystery here, and something mystical that remains unexplained.

In the end, Justin Cronin's magnificent trilogy isn't about the destruction of humankind. Though the virals do a lot of bloodletting, they release and reveal something both deeper and higher. They show us, finally, for what we are: beings who are relentless in our quest for connection, for brother- and sisterhood, for family, and for a future.