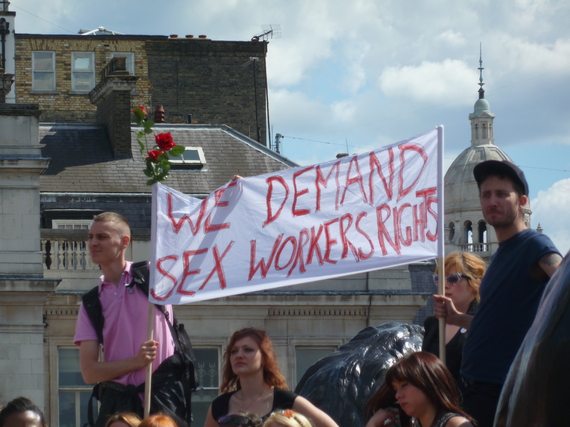 This week France became the fifth European country to make it illegal to buy sex. This so-called "Nordic Model," which is actually only implemented by some Nordic countries, is gaining momentum throughout the continent and its proponents are trying, so far unsuccessfully, to make it a EU-wide reality.

The so-called "Nordic Model" is a return to the darkest periods of left-wing paternalism, in which self-professed progressives fight for middle class utopias at the expense of the socially weak. In classic fashion the opinions of the 'protected' are either ignored or dismissed by the 'protectors'. Sex workers, who in large majority oppose the criminalization of people who buy sex (so-called "Johns"), are stripped of their agency, reduced to "victims" of the "sex industry" who suffer from "false consciousness."

A recent editorial of The Guardian, the British standard bearer of the European progressiveness, gives an interesting insight into the increasing difficulties that progressives have with justifying criminalization of sex work. It is a remarkable combination of confusion and desperation. While it actually refers to some of the little reliable research that is out there, it largely ignores its implications and recommendations. This is because most serious research shows that the "Nordic Model" has neither improved the situation of sex workers nor significantly decreased the "sex industry." Instead, as The Guardian somewhat acknowledges, the "New Zealand Model" (of decriminalization) has at least achieved the former.

The Guardian stakes its claim to ban sex work primarily on the "harm principle,", that is "the assertion that the only just use of power in a civilised community is to prevent harm." So, what harm is being done? Progressives often remain vague on that, assuming that "we all know" what they are talking about. There is no doubt that physical and verbal abuse is a major problem for sex workers, but this is hardly unique to that specific group. For example, here in the US rape is rampant at colleges and in the military and yet no one argues to ban armies and universities (or their recruiters)!

No, the alleged "harm" is in the act of sex work itself, i.e. the selling of sex. This is a position that might make sense from a conservative religious point of view but much less so from a progressive perspective. While progressives can, and perhaps should, oppose the commodification of sex, the question remains: why only of sex? Why not also of education and health? Similarly, while it may be true that "in all paid-for sex there is, arguably, an inherently exploitative dimension," this can be argued for many other professions - from entertainment to mining to professional sports (like boxing or football).

The real argument seems to be that sexuality is something "personal," which is intrinsically linked to (strong) emotions. Obviously, this is a highly debatable position, and will at the very least depend on the person. Moreover, it has a clear, if often implicit, sexist underpinning - as it is the selling woman who is harmed, not the buying man, reflecting a long-standing gendered notion of sexuality, in which female sexuality is inherently problematized.

But even if women were harmed by sex work - and by the work itself rather than by the conditions and stigma associated with its criminalization - it would still constitute a matter of self-harm - forced sex work is always illegal, as it constitutes rape not sex. The only way to argue that it is harm rather than self-harm is to strip sex workers of agency. And this exactly what is being done, including by feminists and progressives that normally defend the agency of women.

In the words of The Guardian editorial: "The social and economic circumstances in which a woman sees sex work as the best available option represents, in itself, an environment of coercion." Sure, this undoubtedly applies to many, perhaps even most, sex workers - who, incidentally, are not all women! But it also applies to many other professions. Few people move to the oil fields of North Dakota because they love the dirty hard work and long remote winters. And many if not most, people enlist in the military, particularly in countries that are often involved in military conflicts (like the UK and US), because of a lack of social and economic alternatives. Moreover, soldierscan not only loose their lives, they also run a heightened risk of being raped!

If progressives really want to help sex workers, and weaken the exploitative aspects of the "sex industry," they should legalize sex work, or at the very least decriminalize it. This will dramatically increase the health and safety of sex workers, as has been shown in New Zealand. They should also change the social climate surrounding sex work. Obviously, this will be much more challenging, not in the least because it requires them to change their own traditional views on sexuality in general, and female sexuality in particular.

If they really want to legislate something, then focus on empowering sex workers vis-à-vis the "exploitative" sex industry. Create an educational infrastructure and legislative structure that enables (collectives of) sex workers to run their own affairs, making them independent of pimps and others. Punish discrimination of sex workers by other businesses, such as banks and other financial institutions, who often refuse to open accounts for sex workers - even if they are not involved in illegal activities!

Even if the final goal is to live in a world without sex work, the first concern should be for the (alleged) victims of the sex industry. As sex workers have made clear across the world, they do oppose the criminalization of both the selling and buying of sex. They want to see their trade decriminalized (or legalized). As research shows, it is only when sex work is decriminalized that the life of sex workers improve. And that should be the prime objective for all, including those truly concerned with the "victims" of the "sex industry."