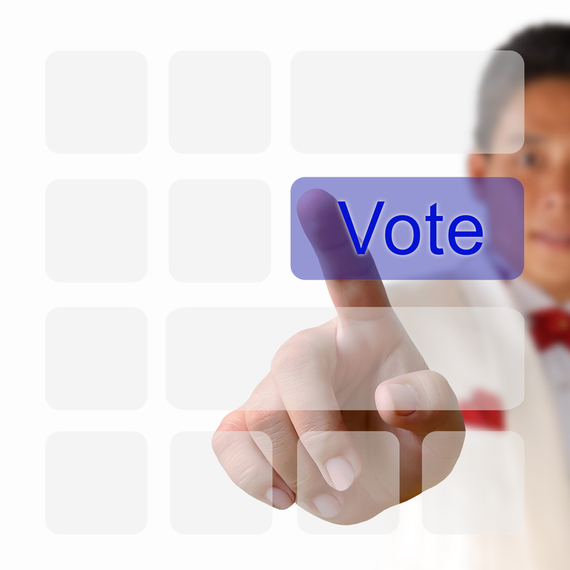 Image via Shutterstock
By Edie Lush

It's remarkable that in a world where it seems everything is becoming more digitized, most of the globe still elects their political leaders with pencil and paper. Only a peculiarly-diverse handful of countries -- including Belgium, Brazil, India and Venezuela -- use electronic voting machines nationwide. (The U.S. and other countries use them in some areas.) What these countries have discovered is that when you have a robust system the cost of elections falls, people's votes count more, fraud is cut and the results are known faster. And, rather extraordinarily, replacing paper with machines can change societies in ways that save lives. (For more, see below.)

So why hasn't the world moved more quickly to voting via a machine? Unfortunately the path to electronic voting nirvana is strewn with rather deep potholes, principally around security and transparency.

In 2006, the Netherlands reverted from electronic voting back to paper after Dutch campaigners hacked a voting machine, causing it to produce phony results. (They also taught the device to play chess.) Likewise, in 2012, Ireland's nascent experiment with e-voting ended in frustration when €54 million worth of machines were sold to a recycling firm for €70,000 because the machines couldn't be guaranteed to be safe from tampering, nor could they produce a printout so that results could be double-checked.

But it's far from all bad. I spoke to Antonio Mugica, CEO of Smartmatic, the largest privately-owned maker of electronic voting devices. (India's machines are made by state-owned companies and Brazil has used several providers.)

Smartmatic, based in the U.K. and the U.S., has manufactured over 150,000 devices to help conduct elections around the world. Their machines have counted close to 2.5 billion votes in over 3,500 elections. Smartmatic's machines were not implicated in either the Ireland or the Netherlands disasters. Security is understandably at the forefront of Mugica's mind. "It is critical to have a robust system. Our machines have over 200 security features and cryptographic algorithms to make them resilient to attack. The machines and software are foolproof, tamper-proof, and hacker-proof." He hopes. In today's attack-rich online environment, determined attackers seem to be able to undo almost any protections. But Smartmatic employs a state-of-the-art approach. It stores, tallies and transmits votes with technologies similar to those typically used for banking transactions.

According to Mugica, electronic voting machines increase the transparency of an election. He argues that the best way to increase transparency is to allow the hardware and source code contained in the software running the machines to be reviewed by all political parties and election monitors to check for bugs ahead of an election. (But as with most things political, controversy can still ensue. For all Mugica's intentions, his company has sometimes been accused of withholding its source code.) Another feature intended to add transparency are the printed copies produced of each electronic vote. These can be verified by hand during post-electoral audits.

Electronic voting machines can also make elections more accurate, which enfranchises people. Even optical scanners, which scan voter-marked paper ballots, popular in parts of the U.S., have a margin of error because people mis-mark their ballot. According to Smartmatic, when Venezuela migrated from optical scanning to Smartmatic voting machines in 2004, it lowered the amount of spoiled ballots from 10 percent to zero. Interestingly, the cost of running the election also halved -- from $8-10 per voter to $4. Since there is no human participation, the processes of counting votes: summation, tabulation, and adjudication processes are fully automated. It's cheaper to run an election with machines than people.

Digitizing votes also saves lives. I spoke to Thomas Fujiwara, assistant professor of economics at Princeton University, about the effect voting machines had on the Brazilian election. At the beginning of the period studied by Fujiwara (1998-2002), 23 percent of the Brazilian population was illiterate. Paper ballots require Brazilians to write the candidate's name or electoral number on a ballot -- resulting in many error-ridden and blank ballots, especially in poorer areas. In mechanizing the vote, Brazil created a system that guided voters through the process, asking them to confirm their choice with a picture of the candidate they are supporting. More poor and illiterate voters then began to vote, which in turn encouraged politicians to address their concerns.

These new voters elected left-wing political parties that promised -- and delivered -- a stronger state-funded healthcare system, which increased spending on maternal health. Fujiwara has shown that this increased spending directly after elections in 1998 and 2002 resulted in fewer babies being born underweight, a key indicator of infant mortality. For more, see his study.

Voting machines have also saved lives in the Philippines. The Philippines is a nation of 2,000 inhabited islands where 18,000 political seats are up for grabs in each election. Vote counting used to take up to 18 hours in each polling station and then it took up to 40 days to reconcile the vote count nationally. In this interim period, dozens of lives could sometimes be lost in violent disputes that erupted around the vote count. Additionally, it was common for ballot boxes to go missing, causing more chaos and distrust in the election process. Electronic voting machines first went into use in 2010, and by the May 2013 midterm election the victors were announced between two and 48 hours after even the most remote islander had cast her vote on an electronic voting machine. The usual corruption and violence around the votes significantly diminished.

Of course, voting machines don't solve all problems. As Judith Kelley, senior associate dean at Duke University's Sanford School of Public Policy told me, "Elections are huge, complex systems with multiple opportunities for cheating. Addressing fraud is a bit like playing whack-a-mole: as soon as you eliminate fraud in one part of the system, it pops up somewhere else." In the U.S., the Supreme Court is dealing with a case of gerrymandering in Arizona. In Zambia, fishy results come from the most remote polls, where election monitors aren't present. In India, political parties offer taxi rides, saris, and cash in return for a ride to a polling station in more remote areas. In effect, they're buying votes. The machines may be clean, but sadly that doesn't mean that the politicians and parties you're voting for will be.