Sitting, pen in hand, thinking about the depressing and disturbing events of recent months, and particularly the last couple of weeks, I tried to make sense of how I feel through the doodles and scribbles on my paper. As so many cartoonists have shown in the aftermath of the horrific Paris events, this medium can provide a powerful exposition of ideas and feelings, and a platform for intelligent and nuanced debate. But I wanted to break away from the overused duality of The Pen vs. The Gun which featured in so many of these responses. 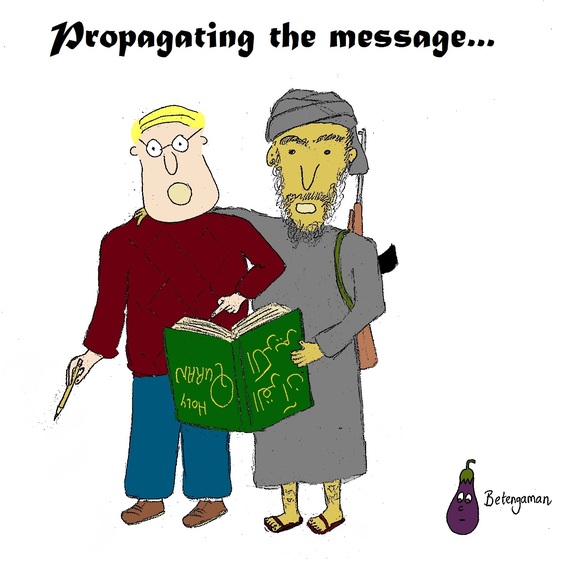 Like many other Muslims who value free speech but are conscious of the distortions that some media propagate, I have felt a sense of isolation in recent weeks - a difficulty in finding a representative voice amid the clutter. And so I wanted to draw what I see from my own vantage point.

What I see are people who commit atrocities in the name of my faith, either through complete ignorance of what Islam is about, or through the intentional twisting of its words and spirit for their own political gain. And I see media that is more than happy to accept this dramatic discourse and use it to misrepresent Islam on a wider scale, feeding into a dangerous Clash of Civilisations narrative. And I see both from the other side.

Violent ignorance and misrepresentation rely on each other. They feed on one another and fuel one another, creating a cyclone that is threatening the middle ground on all sides and insulting our common humanity and intelligence.

In Islam we are encouraged to do "da'wah" -- spreading and propagating the message of our faith, primarily through our own good deeds and actions. But in today's environment, the loudest voices are working together to paint a picture that is far removed from the essence of Islam.

The content of this blog reflects the views of its author exclusively.