With a black hood covering my head, all I could see outside was blurry and dark. The outside couldn't see in. After an hour of standing still, my muscles began to ache terribly. The cardboard sign I carried felt like a slab of concrete. Sounds blended and muffled, and their quiet rebelled against the busyness that the shadows were transacting. Constantly, the shadows took pictures of us, and stared, and reacted. I was one of about a dozen that day dressed in hoods and orange jumpsuits, standing silently in a row before our altar and our stage, the White House. 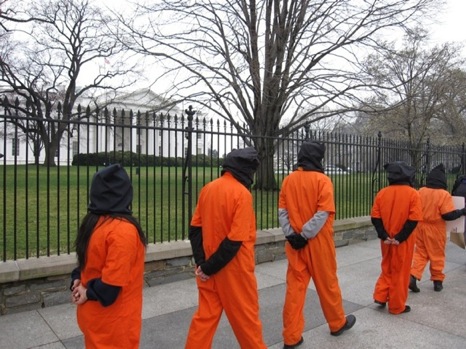 Last week I joined a group called Witness Against Torture, half-way into their hundred-day vigil campaign to close the Guantanamo Bay prison and end the filthy torture and detention practices that the U.S. has tried to dust off for its war on terror. Throughout, people from around the country have traveled to Washington and lived together at a Buddhist temple while taking part for as long as they were able. Our performance caught passers' eyes and got them talking. It caused children to ask their parents, "What is Guantanamo?"

We weren't the only ones on stage, though. Some days, the one-block stretch of Pennsylvania Avenue between the White House and Lafayette Park puts the Kennedy Center to shame. Since August, 1981, a little woman from Spain named Concepcion Picciotto has been living there with her hand-painted signs and her humble tent, conducting a 24-hour "truth and peace" vigil. "Live by the bomb die by the bomb," her home says. Close by, a man in black tails and a top hat carries out his strange, geometric dance in silence. The Chinese movement Falun Gong holds signs and hands out flyers about the torture of their compatriots by Beijing. My colleague recognized Adam Kokesh, the Iraq Veterans Against the War activist who interrupted John McCain's nomination acceptance speech last year. He had a sign too. One day a group with slogans, petitions, and a megaphone broadcast their desire that Temporary Protected Status be applied to immigrants from Haiti. 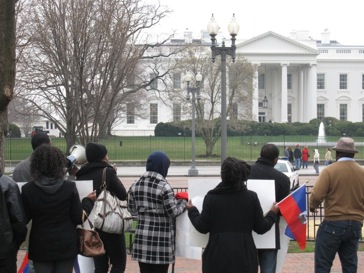 The block is closed to all cars but those with business for the Executive Branch. Wave after wave of tourists wanders through to get the best glimpse of the mansion. Foreign TV reporters, without access to the prime spot inside the gate, record their stories from the sidewalk. The occasional Segway tour zooms by. Then a pack of school boys in military uniforms, marching in step. Watching over it all are the Secret Service men, on bicycles, on foot, and on Harleys.

The biggest performance of all, though, is the official one. Periodically, when a motorcade comes through, the cops clear people from the street. In our detainee garb, we stood in a line on the curb so as not to be missed. Flashing police lights and black luxury vehicles whisk whoever-it-is off to wherever. On St. Patrick's Day, when the Irish head of state came to visit, the fountain that stands between Pennsylvania Avenue and the White House was running green water. His motorcade included a limo with a little Irish flag in front. For a while the day before, they closed off the whole street, the sidewalk, and Lafayette Park, too. It must've been the big kahuna.

A military cop showed up that time who had "police" written in Arabic on his back above where it was in English. I asked why he needed that language in D.C. "Because," he said. He had put it there himself. 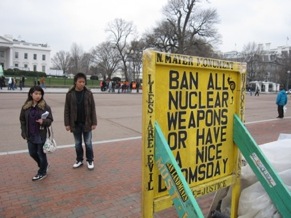 Presidential performance is tough competition. Every few minutes as we stood in silence, someone would pass by saying, "Isn't Obama already closing Guantánamo?" (And, occasionally, "They should put you in Guantánamo!") Two from our group, wearing streetclothes, were on hand to explain that, while the president promised to close the prison in a year, independent experts say it could be done in a hundred days. And that Bagram, an even worse prison in Afghanistan, is being dramatically expanded. Despite the appearances, Obama has yet to thoroughly repudiate the nefarious innovations of Bush's war, and he shows no sign of making accountable the architects of its worst policies. So he has offered a nice performance, but it hasn't made ours any less true.

"He's a good man," said one passer-by of the president. "Give him time." Sure, three cheers that the man got elected. But does that mean go home and leave the work of democracy to the pro politicos? No--we the people get to put on political performances of our own, to share them with each other, and to direct them at those we elect in order to remind them who's boss. They are a check on government between election cycles--and big business too, though that's a whole other fish to fry. 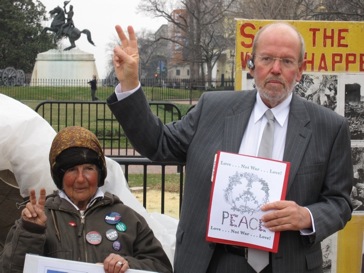 There are moments over the course of the day when the Pennsylvania Avenue Theater really takes off, when three or four messages start crossing at once in beautiful cacophony. It reminds me of Speaker's Corner in London, where all the most articulate of the crazies go to argue theologico-political doctrines. What better lawn ornament could the White House have than a passel of passionate citizens giving tourists something to think about? May no bureaucracy be erected to process their complaints, besides their tense trapeze dance with the Secret Service and the open air.

The theologian William Stringfellow, a follower of circuses, once wrote, "The circus is among the few coherent images of the eschatological realm to which people still have ready access." The eschaton is the end of the world, when we will finally know the truth for what it is. He means that our most surprising performances of imagination can also be our clearest glimpses of that truth, breaking through the illusions of power and propaganda. May Pennsylvania Avenue remain a circus, and may more of us run off to join.