For an undetermined number of years, adorning a wall in the Wagon Wheel dining hall at Mountain Home Air Force Base in Idaho was an inspirational piece of artwork proclaiming the message of Matthew 5:9 -- "Blessed are the peacemakers" -- because nothing says "peacemaker" like the image of the medieval crusader that this message accompanied. The artwork was also emblazoned with the word "integrity," because nothing, of course, says "integrity" like an overt display of Christian nationalism. 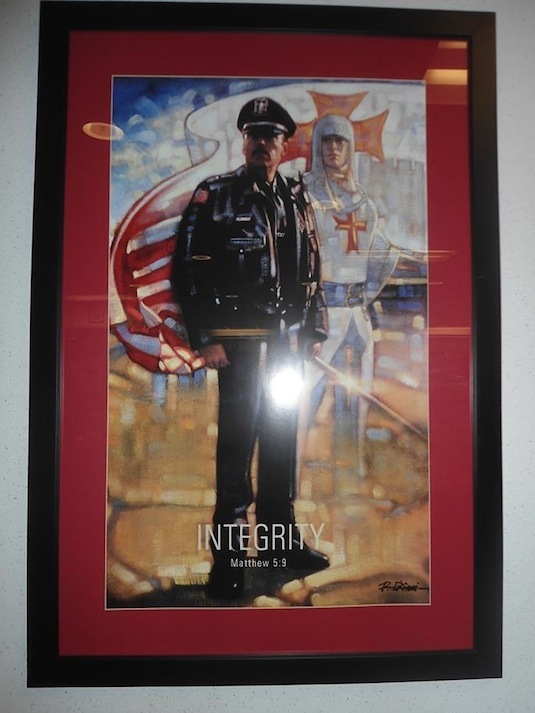 While many other airmen eating in this dining facility over the years have no doubt been offended by this depiction of Christian supremacy, none were willing to face the predictable retribution that would likely follow if they objected to it and tried to get it removed -- until now, that is.

This morning, MRFF was contacted by a non-commissioned officer (NCO) from this Air Force Base, who was acting as the spokesperson for a group of twenty-two airmen who wanted this repugnant piece of artwork removed. Were these airmen a bunch of militant atheists who seek to rid the military of all vestiges of religion? Well, no. Seventeen of the twenty-two are Christians, both Catholic and Protestant.

The NCO speaking for the group had first contacted another organization in his area to ask for help in getting the artwork removed. That organization referred him to America's most diabolical defender of religious liberty -- the "Field General of the Godless Armies of Satan," as one prominent mega-church pastor dubbed him -- Mikey Weinstein, head of the Military Religious Freedom Foundation (MRFF).

Mikey immediately called the Pentagon because, you know, he can do that (to the obvious consternation of the folks at breitbart.com, certain members of Congress, and other modern-day Christian crusaders).

Mikey gave the Air Force an hour to take action.

Fifty-six minutes after his call to the Pentagon, the image of the crusader, with its odious melding of the crusader flag with the American flag, had been removed from the dining hall.

Nobody is sure exactly how long this utterly inappropriate and blatantly unconstitutional image has been hanging in the dining hall, and whoever should be held responsible for deciding to place it there may very well no longer even be at the base. But the current Wing Commander, although not responsible for the hanging of this now removed dining facility artwork, is responsible for everything that happens on his base now, and to his credit has decided to take action beyond just the removal of this single offensive display.

Last year, the Air Force ordered what were called "health and welfare inspections" on all Air Force bases, which were conducted between December 5 and December 17. While these inspections were prompted by the military-wide epidemic of sexual harassment and assaults, and the primary target was the display in military workplaces and public areas of inappropriate materials objectifying women, many Air Force bases extended their inspections to include any type of materials that were inappropriate to display in these areas, including inappropriate and unconstitutional religious displays.

This morning, the Wing Commander at Mountain Home Air Force Base, where the "health and welfare inspection" had obviously not been extended to include inappropriate materials other than those objectifying women, told Mikey Weinstein that he will be ordering another inspection to rid his base of anything else like what had been hanging in the dining hall.

Shortly after the removal of the dining hall crusader, the NCO who had contacted MRFF sent the following email to Mikey on behalf of himself and the twenty-one other airmen who decided to take a stand for religious liberty:

I want to send my deepest appreciation to you and your entire MRFF organization. I'm an NCO (Non-Commissioned Officer) stationed at Mountain Home AFB, Idaho, and I have been extremely disturbed and shocked by a clearly Christian picture of religious supremacy very prominently hanging in the dining facility of our Air Force Base. I was raised in a Christian home; however, this picture made me feel terribly uncomfortable, disheartened and disappointed. I and countless other Airmen were forced to look at this "Crusader/USAF" painting while we ate. We had no other choice. I believe the Department of Defense and the USAF shouldn't be shamefully promoting a specific religion, and immediately removing this unconstitutional "Crusader/USAF" framed painting is one small step in overcoming the epidemic of out-of-control Christian religious extremism in our U.S. military. For the record, there are 21 other MRFF clients at Mountain Home AFB that came forward to you and the MRFF on this particular matter of outrage and 17 of them are either Protestant or Roman Catholic. None of us felt as though we could go to our command chains or to any other USAF agency to fix this matter without suffering either direct or indirect negative repercussions. Mikey and MRFF, thank you for so passionately representing everyone's religious views and rights under the constitution, whether they are mostly Christian, as is the case here, or any and every other faith or even no faith! Again, thank you for getting this Christian superiority painting so swiftly removed.