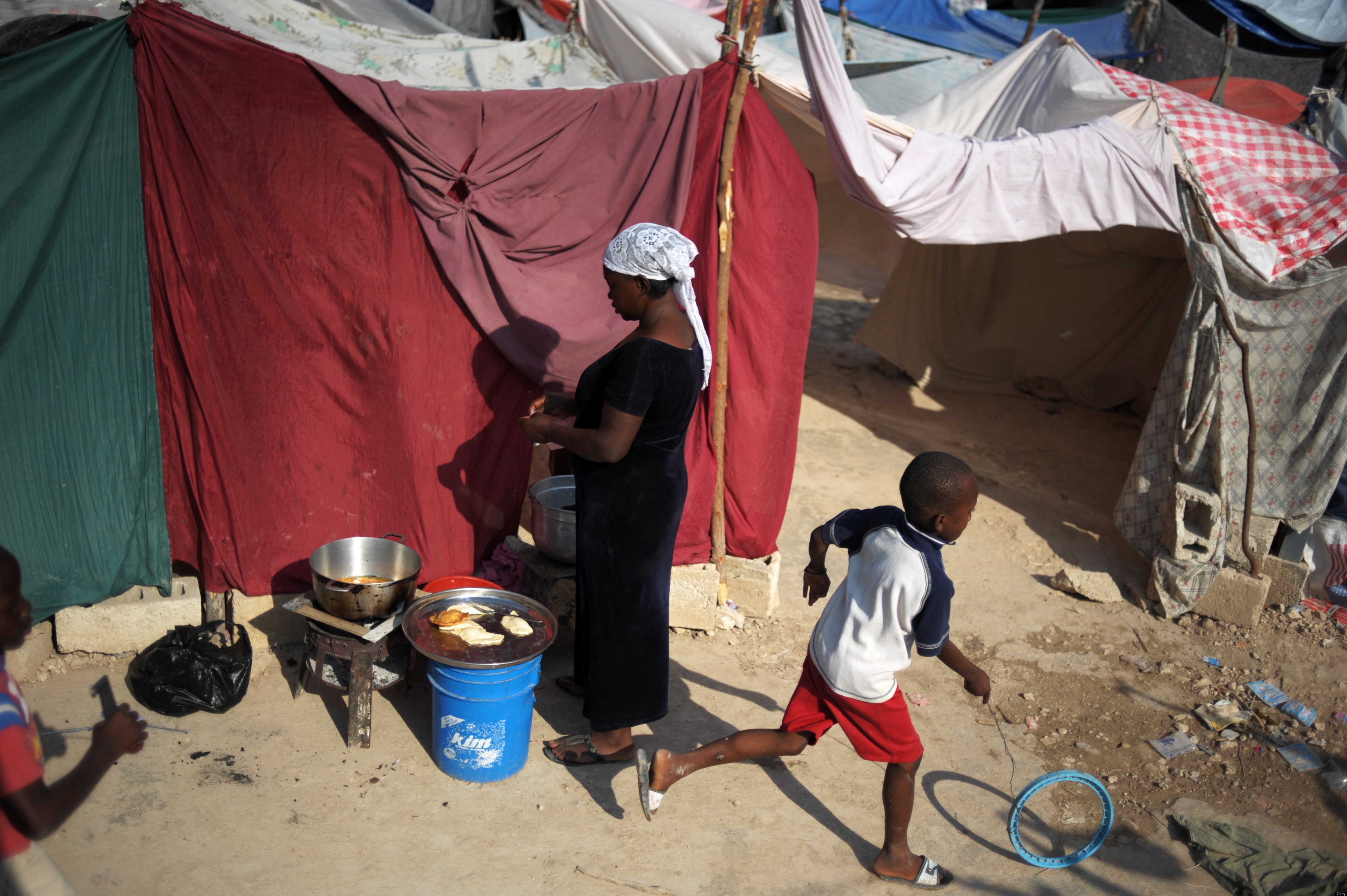 The morning I met Nadine in her new "home" in a former park in the middle of the Peacutetionville neighborhood in Port-au-Prince, it had been raining -- the first rain since the earthquake. The ground was muddy and slick, and her shelter did not have a floor. She and her family slept on cardboard boxes on the dirt. The shelter did, however, have walls and a roof of bed sheets and some plastic sheeting. A rudimentary charcoal stove was set up just outside, where a small pot of rice was cooking for the day's meal for her family of five.

Like most of the 4,000 people living in the crowded settlement, Nadine had received a ration of rice and a cooking pot from two of the hundreds of humanitarian agencies working in Port-au-Prince. However, she had not received fuel to cook the rice and had to buy charcoal. The cost of charcoal has risen by about 25 percent since the earthquake, putting a huge financial strain on families like Nadine's. The price of kerosene, used by many people in Port-au-Prince before the earthquake, has gone up even more and most women are now cooking exclusively with charcoal. Most are also cooking just one meal a day, as they can't afford to buy more food or cooking fuel.

I went to Haiti with the World Food Programme (WFP) to conduct a joint assessment on post-earthquake cooking fuel needs. While I was there, I interviewed Nadine and many other displaced women, as well as humanitarian workers and host families outside of the capital.

Even before the earthquake, the demand for cooking fuel had put Haiti in a precarious environmental situation. More than 70 percent of the population was reliant on charcoal and firewood to cook its food; with only two percent of Haiti's forest cover remaining, this was clearly an unsustainable practice. In addition, the health consequences from indoor smoke were severe: Haiti has one of the highest rates of tuberculosis in the world. Yet, despite increasingly urgent reports from the World Bank, the UN Development Program and others, no large-scale, sustained initiatives had been undertaken to assist the women of Haiti to switch to a cleaner, healthier, cheaper and more sustainable fuel.

The earthquake has, in some instances, provided an impetus to try to change some of the more unsustainable, impractical or even dangerous aspects of the pre-earthquake 'status quo.' The Women's Refugee Commission and WFP's assessment of cooking fuel needs was undertaken with an eye toward 'building back' a better household energy strategy.

Shockingly, we found that families are spending upwards of 40 percent of their daily income on cooking fuel. Women without any access to cash have resorted to collecting scraps of scrub bushes growing on the edges of their tent camps to use as cooking fuel. One glance at these rocky, open fields, however, makes clear that it won't be long before even these few branches are gone.

Following the assessment, the Women's Refugee Commission and the World Food Programme are urging the humanitarian community to adopt a three-phase cooking fuel strategy for three distinct types of affected populations in Haiti:

1. In the settlements in Port-au-Prince, most people will continue to use charcoal in the immediate term. But, the medium to long-term goal should be to support a switch to a more sustainable, healthier, less costly fuel -- such as liquid petroleum gas (LPG), ethanol and/or biomass or waste briquettes (briquettes can be made out of any number of organic materials -- paper, rice husks, even some kinds of garbage). Innovative ideas such as solid ethanol disks should be tested immediately.

2. For host families outside of the capital (which have taken in hundreds of thousands of displaced people -- some individual families which we interviewed had themselves taken in 15 extra people), charcoal is likely to remain a main cooking fuel at least through the medium term, that is the next six to 12 months. Cooking fuel rations (in addition to food) should be provided to reduce the financial burden of having to cook for so many extra family members, and fuel-efficient stoves should be promoted, which would reduce overall fuel consumption.

3. Over the medium to longer term, the focus should be on building the capacity of the population to manufacture such stoves as a livelihoods activity.

4. In the rural areas, which were not heavily affected by the earthquake itself, but where charcoal manufacture and sale make up at least 16 percent of all income earned, the focus should be to include people in the process of manufacturing alternative fuels and energy technologies over the long term. This will ensure that any switch in fuel production does not destroy the rural economy.

There is no question that the logistical constraints in Haiti right now are massive and that the humanitarian community is working under tremendous pressure to meet as many of the basic needs of the three million affected Haitians as possible. However, as the rainy season and hurricane season approach, as more food rations are distributed, and after those few branches poking out from the rubble have been burned to ash, the need for cooking fuel will only increase. What was unsustainable before the earthquake is even more precarious now.