I always think that it's strange that the Jews, The People of the Book, eventually became much better known as The People of the Joke. Strange because laughter in the Old Testament is not a good thing: When God laughs, you're toast. If you say, "Stop me if you've heard this one," He does for good.

The kings of the earth stand ready, and the rulers conspire together against the Lord and his anointed king ... The Lord who sits enthroned in heaven laughs them to scorn...(Pslams 2:2-4)

And the Hebrew prophets did like being teased, as these tykes learned when they taunted the prophet Elisha:

He went up from there to Bethel and, as he was on his way, some small boys came out of the city and jeered at him, saying, "Get along with you, bald head, get along." He turned round and looked at them and he cursed then in the name of the lord; and two she-bears came out of a wood and mauled forty-two of them (2 Kings 2:23).

So how has all this analysis affected me as a cartoonist of the Jewish persuasion? Fortunately, not at all, because, one, I've never been persuaded by my religion or any other, and two, I just found out about all this on Wikipedia. 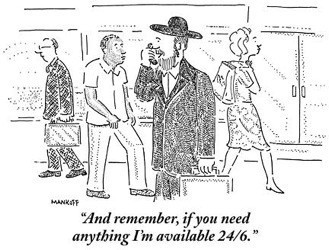 Nevertheless, I will be speaking at Rutgers University along with Eddy Portnoy on Yiddish and Jewish cartooning. That despite the fact that out of the 938 cartoons that I've done for The New Yorker, only one is distinctly Jewish and that for obvious reasons. 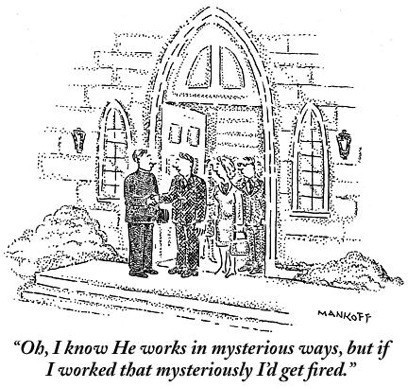 When, I was first dating my wife, who is not Jewish, we once were having what I thought was an ordinary conversation and she said, "Why are you arguing with me?" I replied, "I'm not arguing, I'm Jewish." I thought that was clever. She didn't.

Some humor scholars claim this stems from the practice in the Talmud of pilpul, which Leo Rosten described as "unproductive hair-splitting that is employed not so much to radiate clarity ... as to display one's own cleverness..."

I go along with that except I like to think that some clarity and cleverness are not mutually exclusive. Anyway, that's my aim in cartoons like these. 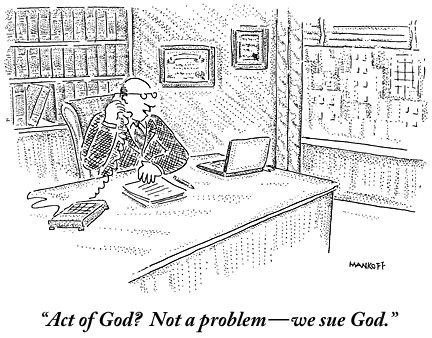 Now, am I worried that these jokes will bring His wrath down upon me down with a bolt from the blue. Not really, but everytime there's a thunderstorm, I hide in the cellar.

Find out more about Yiddish Cartoons.