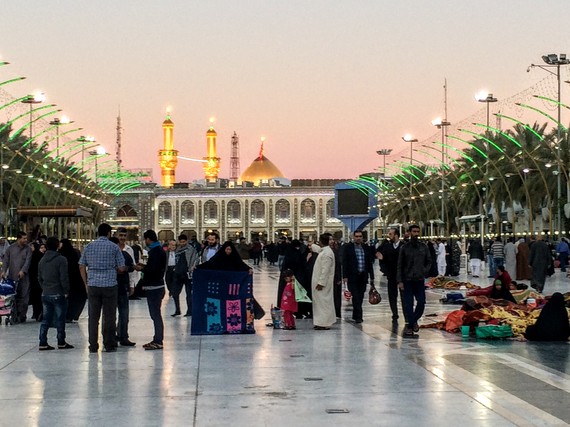 Most people see Iraq as a battleground. They've seen it that way for many years now. A place where the local death toll from war over the past 15 years is uncertain but numbers in the hundreds of thousands, with survivors living to see their country devastated economically, politically, and socially, ravaged by wars. Iraq is all of that, but it is also so much more.

A few weeks ago, I took a journey to Iraq, which houses sites of spiritual significance to many Muslims around the world, especially those in the Shia sect of the faith. Some of the cities are home to the tombs of several important historical figures, including Prophet Muhammad's son-in-law, Ali ibn Abu Talib, a man many Shias see as defying any single characterization. He's revered as a spiritual and political leader, warrior, legislator, intellectual, and family man. Millions make their way to Iraq to visit his grave and the graves of many others who made history and, even after death, continue to influence history.

Iraq is also home to the living - millions of people, families, and hopes and dreams. During my trip, I was fortunate to encounter a young man who also defies characterization. He has forever changed my perspective on Iraq.

At age 26, Mansour is a tall, lean, bearded guy, with his thick black hair and beard shorn short, forming a perfect frame for his warm, unassuming smile. When I think of him, it's him standing with his shoulders pushed up in a slight shrug, hands tucked in his pockets, head slightly askew and topped with a cap to block out the spring sun. That's when he managed to stand still, anyway.

I met Mansour because his temp job was as a helper to a tour group of folks like me, who had journeyed to Iraq for a spiritual pilgrimage. He lugged about our bags, pushed the wheelchairs of handicapped folks, answered our questions about directions, and otherwise generally stayed to himself, trying to catch a few hours of sleep in between.

Mansour was born in Najaf as one of four brothers and blessed with two sisters. His siblings are all married, and one brother works as a photographer and the other as a construction worker.

In 2014, while Mansour was studying at the University of Kufa, ISIS started making some serious gains in Iraq. Alarmed by the gains and ISIS' hateful and divisive ideology, rhetoric, and violence, thousands of everyday Iraqis were compelled to act; ordinary, untrained men left behind livelihoods, families, and homes to voluntarily take up a fight that impacts all of us, even thousands of miles away.

ISIS is often perceived as hating the West, but ISIS also regards Shia Muslims as "infidels" and has wanted to expand its reach into Iraq's Shia-populated areas and destroy sites of spiritual and historical significance.

So, while Mansour studied, his youngest brother, Ahmed, a 19-year old teenager, announced to his family that he was going to join the fight against ISIS. Mansour's family struggled between wanting to talk Ahmed out of his decision and encouraging him to do what their faith compelled them to do, namely, fight against injustice and threats to humanity. They ultimately respected Ahmed's wishes and saw him off to war. Ahmed was sent off to the front lines.

Somewhere on a battlefield that stretched from Samarra to Tikrit, Ahmed was shot in the neck. He was hospitalized in Baghdad. After battling against ISIS, Ahmed was fighting once again, this time for his life. His family traveled from Najaf to Baghdad, almost 100 miles away, to spend as much time as they could with him.

Thirty-five days later, Ahmed passed away. A year later, his brother is sitting across from me, telling me his story.

Each time I have traveled to Najaf, I have been jarred by the sight of processions of plain wooden coffins being carried in and out of the shrines by loved ones who want their fallen to have the opportunity to pay their final respects at these revered shrines before burial. Many are men and boys who fell fighting ISIS, answering the call of their faith to fight against injustice and protect all of humanity against it. A year ago, Ahmed's coffin was brought this same way to pay its final respects, draped in an Iraqi flag, and joining this seemingly endless procession. These are fathers, sons, brothers that are no longer here and their stories remain largely unknown and untold. They leave behind widows struggling to support themselves and their families, and far too many - and yet sadly still not enough - orphanages lining the streets of Iraq. 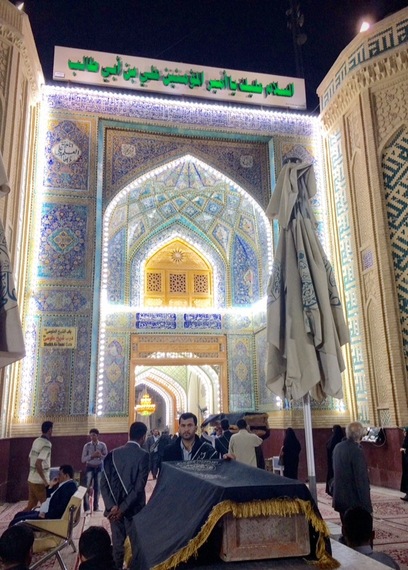 Somehow, even as he grieved alongside his family, Mansour managed to graduate in the summer of 2015 with a degree in English literature. He described English as a language that grows with you and allows you to communicate with many people around the world. When I asked if he dreamt of living abroad, Mansour was resolute about staying and helping rebuild his country and investing in its future. He hopes to teach English one day. He took this temp job on, in part, to practice his English. He admitted he wasn't getting as much practice as he hoped, but he was happy with the job anyway because he saw a spiritual reward in being of service to folks coming to Iraq for spiritual pilgrimages. Mansour is a believer.

He is also far more informed about international relations and politics than many people I know. He said that the war in Iraq unseated Saddam, but it also destroyed the legal underpinnings of Iraqi society, leaving a power vacuum, growing corruption, and a lack of institutions to right the destabilized country.

Mansour told me a popular saying in Iraq: "Before, we had one Saddam, today we have many Saddams." He said that Saddam was a reviled figure, but he was the evil everyone knew. It is harder to identify the dangers today, as Iraq continues to reel from the devastation of one battle after another.

My conversation with Mansour also showed an appreciation for embracing complexities and nuance. He does not see America's foreign policies as reflective of the entire country's citizenry's opinions. He says if more people had more information about what was actually unfolding, the funding behind the forces laying waste to Iraq, and how chaos in the Middle East benefits some world powers and groups, then they would better understand what's really happening and why it's happening.

I wish we, as a nation, could return the favor of not clumping entire populations together, and instead live up to his hope that we set out to better understand what's happening in different parts of the world. But, as a nation, we tend not to question our sources of information and we tend to shy away from complexities; we are nuance-averse. We want simple truths and simple answers; we don't want to face, much less address the complex realities facing the world today.

Mansour worried a lot about how I would tell this story. He didn't want his people further villainized or painted as one-dimensional figures. He worried about Iraqis being seen just as fighters.

I worry about that too. I worry that when we all hear about Iraqis being killed, we assume that refers to ISIS forces being killed. I worry that we think of Iraqis (and Syrians and really all males in war-torn countries) as faceless, nameless people. We do not think of Ahmed. We do not think of Mansour, the English Literature major whose favorite movie is 13th Warrior, favorite book is Persuasion by Jane Austen, and favorite music is by Adele.

Sincere, thoughtful, believing, observant Mansour who told me at the end of our talk that he, too, was planning to follow in his younger brother's footsteps and take up fighting against ISIS. I had a lot going through my mind when he told me, but the question I blurted out in confusion was why he wasn't there already. His mother's still-raw grief over losing her youngest was one factor, the other was what he summed up by saying he was waiting for the tawfiq to do it - a word that implies the intersection of God's will in granting one the capacity and opportunity to do something and succeed at it.

Weeks after leaving Mansour and his world behind, I often think back to our talk and everything he told me about himself, his life, and his family. It seems fitting to me that with his brothers working to capture people's special moments and rebuild the country, one home at a time, Mansour ended up working to help me communicate stories about those people, moments, and homes with the world.

I've brought back not just my memories and his story, but a heavier heart, full of prayers for him, his family, and the many others like them, and the determination to amplify the voices of those who have stories the world needs to hear. 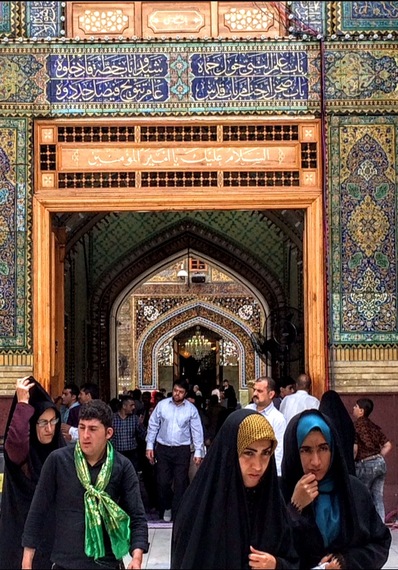