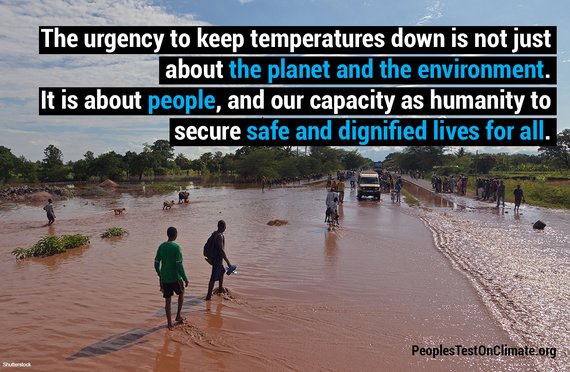 Today, high-level government representatives are meeting in New York to build momentum for the ongoing UN climate change talks. These talks are supposed to culminate in a two-week negotiation in Paris this December, at which a new global deal to address the climate crisis will be agreed.

Last Friday, leaders of a diverse set of organizations from around the world released a People's Test on Climate to be presented to these government leaders. This People's Test does two things: first, it lays out a straightforward "litmus test" by which the Paris agreement will be judged. Second, it contextualizes the Paris negotiations in the real world -- a world in which climate impacts are being felt every day, especially by the world's poorest and most vulnerable, yet at the same time, a world in which these people are demanding action and implementing effective solutions on the ground.

The People's Test is grounded in simple demands originating from frontline communities and grassroots organizations in poor countries: the right to clean, affordable, locally controlled renewable energy; the right to food and water; and justice for vulnerable and impacted people. These demands come from a variety of social movements, from farmers' and fishers' groups to trade unions to communities working together on building resilience to droughts, floods and storms.

It's this grounding that leads to the second, equally important purpose of the People's Test: to contextualize the UN negotiations in the real world. Many governments and UN followers are keen to celebrate whatever deal is struck in Paris as a success, the idea being that any progress is better than none. While there's some truth to this, for the sake of the world's most vulnerable people -- many of whom need nothing short of fundamental, systemic change in order to preserve their lives and livelihoods -- it behooves us to hold our governments to a higher standard.

Climate science paints a frightening picture, one that tells us that incredibly urgent and dramatic action is needed for us to have any chance at stopping runaway climate change. Basic principles of fairness (not to mention a certain religious leader) also tell us that any such climate action must not leave behind the poor, and must support a just transition to a more equitable world.

If the Paris agreement falls short of these standards, even while making incremental progress, we owe it to the world to be honest about its shortcomings -- while ensuring that people don't lose hope and are even more motivated to demand what is needed from our governments when it comes to climate action. The story isn't one about what our governments can or can't do, so much as it is one about what we can do as a unified movement of people.

If we accept the idea behind the People's Test -- that transformation on a massive scale is needed to fix the climate crisis -- then we have to be building power to force that change. The Paris climate talks by themselves cannot deliver that change -- we already know that. So while the negotiations are important, everything we do has to be focused on linking the various struggles for social justice that are happening around the world, and building momentum for an irresistible demand for change. One of that targets of that irresistible demand is the UN process -- because only that process can deliver the global solution we need to this global problem. But regardless of whether or not it delivers that solution in Paris, our work cannot stop there.

As our organizational leaders said in a cover letter to ministers at today's UN meeting:

All our struggles for justice around the world -- for equality, the right to food, economic fairness, human rights, decent work, environmental protection and more -- are interconnected and all are tied up in the struggle against runaway climate change... we will hold you and all governments accountable not only to the policy outcome in Paris, but also to your national and regional policies and to the actual needs of people and the planet... The solidarity between our groups and those sharing our struggles will grow, and with it our power.

It's that power alone that can truly force the change that the world needs. As violent structural racism in the U.S. rears its terrible head, Frederick Douglass' famous quotation is as relevant as ever: "Power concedes nothing without a demand." Those who benefit from unjust systems will not simply give up their privilege voluntarily. Their power must be taken from them -- by vibrant people's movements like Black Lives Matter -- and the systems must be proactively replaced with more equitable ones.

But we can take great hope from another example right here at home, that of marriage equality. This struggle illustrates another fact about social change: it isn't linear. When the time is right, a fundamental shift towards justice can happen faster than anyone could imagine. But only if a long history of work -- organizing people, strengthening institutions, building solidarity, pressuring decision-makers -- undergirds it all. Without that base, a flashpoint moment can pass by with nothing to show for it (look at the 2008 financial crisis -- a classic missed opportunity to reform a fundamentally broken, unjust global economy).

We're working to make sure we put in the work to take advantage of this big moment for climate justice. Paris could be the beginning of that moment, or it could come sometime in the future -- although hopefully we won't have to wait too much longer, for the sake of the world's poorest and most vulnerable people. But when the moment comes, we will be ready. That is the fundamental message of the People's Test on Climate.