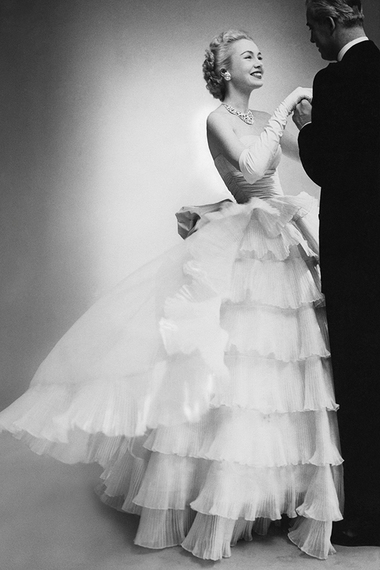 Photo: Roger Prigent/Vogue
To celebrate his upcoming flick The Choice, Nicholas Sparks opened up on all things romantic with IMDb Asks. Amongst the rom-com chatter, a few reader questions snuck in, including one from a guy hunting for advice on how to propose to his girlfriend on Valentine's Day. {Hi, Eric from Chicago!}

"I'm going to go with the practical side," Sparks started with. "If you're going to pop the question, sometimes nerves get involved. You have the ring in your pocket and you might want to do it too soon, so I'd say if you're gong to do it over dinner, make sure you do it at dessert. If you propose at, let's say, appetizers or during the meal, you might just end up eating alone because she's going to run out to call her mother and call her sister and call her best friend and then you sit there by yourself."

Hear that guys? Keep it simple and classic, but wait so that you can enjoy the entire night before launching into newly engaged status. For any guys who might complain that that's a lot of nerves to sit through an entire dinner, Sparks says man up: "It's tough, but you're putting yourself in this position."

[Also, editor's note: If someone could work out a way to propose in a pond when it's raining, we'd likely concede that that, not the dinner scenario, is the best option available.]

For the women out there, Sparks also admitted that he gets the complaints that he's made real-life romance pale in comparison to the big screen. "My daughters do say I've ruined men for her forever, but she's not the only one. I hear that from other women I guess," he said. "I just try to write stories they like and that I like and that everyone likes."

More:
weddingsLoveengagement seasonnicholas sparksDating
Newsletter Sign Up
The Morning Email
Wake up to the day's most important news.
Successfully Subscribed!
Realness delivered to your inbox