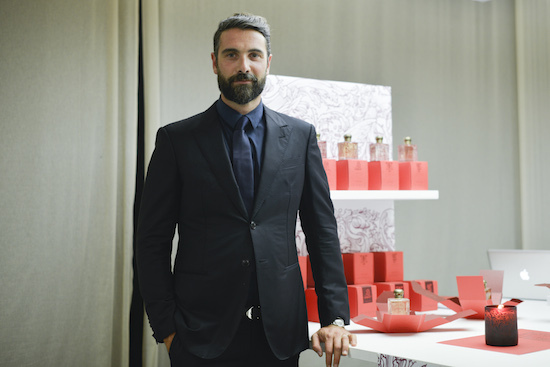 What if you could find, neatly packaged in a bottle, the secret to a happy life? While that may still be a few years away, Italian actor and TV personality Luca Calvani has come up with the next best thing. A set of five fragrances and candles that, with their otherworldly fragrances, inspire, illuminate and ignite an "I'm-never-looking-back" change within all who get a whiff of their scent.

American audiences may be familiar with Calvani from his turn as the villainous Alexander in Guy Ritchie's The Man from U.N.C.L.E., Dante on As the World Turns, or his cameo on Sex and the City. Italian audiences know him from his unforgettable win on TV's "Isola dei famosi" (Celebrity Survivor) in 2006 where he managed to wipe out his competition. Calvani feels equally at home in Italy and the USA, and we not only share the same region of birth -- Tuscany -- and long stays in NYC, but also an acting teacher, Ron Stetson... OK, I digress, but I can hardly be blamed for losing my thread momentarily, because Calvani has this wonderful way of making everyone feel at home around him, while also stealing their attention. He is kind, perfectly centered, self-assured, yet never in a boastful way. One only had to take a look at the parade of fans, asking for selfies with the tall, bearded actor at Pitti Fragranze in Florence to know the broad spectrum of his charisma. Even I couldn't resist.

But the reason I was at the yearly fragrance show inside the Stazione Leopolda to meet Calvani was to find out about his brand, now more than a year old, which just added a line of splendid fragrances to its existing line-up of candles. Inspiritu is the name of the brand that Calvani and his partner and co-founder Olivia Mariotti, both lovers of spirituality and long-time friends, created together in 2014. Clearly explained in their mission statement, the candles and the resulting fragrances are vessels to help us find "within ourselves... a place where we can create, where we can truly listen." Because, the text continues, "it's the stillness, that which separates our thoughts, the space between our feelings, or our fears, that gap," in which we'll discover the light to show us the way. Named after the four cardinal virtues -- Fortitudo, Termperantia, Iustitia and Prudentia -- and the brand concept of light, Lux, the fragrances are the closest I've been to feeling enlightened. In particular Iustitia (Justice), with its eastern notes of Patchouli, Vetiver, Sandalwood and Arabian Elemis, brought me to another world, for a quick voyage to the world Mariotti and Calvani must always inhabit. A place where spirituality helps them cope with the challenges of everyday life.

I caught up with Luca Calvani, so he could personally explain the line as well as talk about his philosophy of life. We should all try to walk a few steps in his shoes, once in a while. I'm sure it would make the world a better place.

How did your company, Inspiritu, come about?

Luca Calvani: The whole idea of this line started with a passion I share with my business partner [Olivia Mariotti] for spirituality. We have been friends for fifteen years and there is one thing that always brought us together, the discovery of a new intuition or a new current of thought. We share that and a passion for candles which we exchange as gifts and we burn for our whole life...

And your company started with candles?

Luca Calvani: I started with five meditative candles. The idea was, again, to tell the story of the spiritual journey, using the olfactive avenue. Because lighting a candle is a ritual and it's usually a solitary one that you do, as you wish to spend some time by yourself, reading a good book, with music, or you're waiting for people to come over and want to create that sort of ambiance. I started with the idea of the four virtues, the cardinal virtues, so Prudence, Temperance, Justice and Fortitude. The allegoric images are first of all universal, understood through the ages, and they're completely transversal, across the board through religions, as is spirituality, spiritual thought, awareness, consciousness -- it's part of every religion and cult and even meditation.

That's such a huge message, because right now we are so stuck on religions...

Luca Calvani: Religion divides us, while spirituality unites us. We use the metaphor of light which we translated into incense, which is also used in all kinds of rituals. We created a blend which uses all the incense I used in all the different practices. The idea of light, light of my eyes, to become enlightened, from Buddhism, light as an idea...

We say people are going back into the dark ages, to mean we are regressing as a society instead of going forward.

Why go into perfumes then?

Luca Calvani: I did this when I thought I was going to quit my job. I always do it, I think I'm done acting, reach a plateau in my career. The truth is that when this happened, then Guy Ritchie called me for an audition, and I get the biggest movie of my career! I think dreams do come true, when you are passionate and living in your dreams. When you are marching at the rhythm of your own drum, things do happen and it's all about "enthusiasm" which means "being with God". The word comes from from enthous, which translates as "possessed by a god, inspired".

How do you interpret the virtues? Can you give me the "soul portrait" of each fragrance?

Luca Calvani: The olfactive blends are matched to the allegoric image of each virtue. Lux (Light) is almost church-like and then a few components of Lux can be found in all the others. Lux is the most clarifying of our candles, almost like a trippy fragrance.

The image of Prudence, Prudentia, is a virgin tempted by the snake in the garden, the angel holds a mirror to show her what is behind her. That's why she has two faces, so she's always looking behind... We thought of that as a garden, iris and Iranian galbanum. It reminds you of green branches. Flowery but crisp and green.

Fortitude, Fortitudo, is the lion so we went for strength and adding the hay to the sandalwood, vetiver and the cedar gives it a bit of an animal feel to it. It's like a horse running around in the back there.

Luca Calvani: I'm particularly proud of this because there is nothing like it out there. It's Justice, Justitia, the scales, and we interpreted that as the horizon with the sea, which is so beautiful and calming and nothing has more justice in nature than the sea. This is very simple, with fennel, Arabian elemis, all the shrubbery you'd find on the dunes by the beach. With an opening note of orange to make it a bit sweeter and to open it up.

There is something life changing about this fragrance, greater than life.

Luca Calvani: What I love about it is that it's almost as if someone took the lid off your head with this perfume. It flies that high, it's just like open air, open space.

And lastly Temperance, Temperantia, it's probably the most understandable of our fragrances. Temperance is bitter and sweet, the image are the pots, cold and hot water. We matched cedar and sandalwood, which are very bitter, with rose and amber, and with cardamom which mixes it up a little bit. A sweeter version of the Lux incense scent.

Who do you imagine as your ideal customer?

Luca Calvani: I think this is such a broad brand that I think anyone with a passion for fragrance, and who at the same time is curious about life and is asking questions. I'm forty-one years old and I'm entering the afternoon of life. The air of ego is starting to crack and I think this has served me up until now, where do I want to go next in my life, where do I find meaning? I think it will appeal to that person...

Top image by Vanni Bassetti, candles by Inspiritu, all used with permission.

PAID FOR BY HILTON
Wellness