Biking in Manhattan is a contact sport. It includes confronting cabbies and dodging pedestrians (who in welcome ways have a supremacy of the street). It demands nano-second reflexes, a sense of daring and nerves stronger than your bike frame. For adrenaline junkies and thrill seekers, I'd guess it rightfully vies with bull riding or wind surfing.

Let's put it this way: I would not allow my 16-year-old daughter to dare the streets of Manhattan on two wheels.

I learned from my recent visit -- riding from Midtown to the north end of Central Park -- that bikes are still on the low, desperate end of Manhattan's transportation food-chain.

Allegedly, bikes have jurisdiction in bus lanes. But all other vehicles shoot through these lanes as well, eliminating any advantage. And these lanes are sure to be blocked by double-parked trucks and eternal street construction. Only in bike lanes that are physically separated from rest of traffic can one travel safely. The problem is, in Midtown such lanes are rare. There is one on the far East Side (First Avenue), but it only travels north. Another separated lane on the West Side is wide and beautifully landscaped, along the West Side Highway, with views of the Hudson River.

So, enjoy the freedom of these routes if they are going where you are. But just try to jag over to Central Park, for example, and it's back to bare-knuckled confrontations. "This is my lane, not yours!" they bark at drivers obliviously drifting into their lane.

It's worth getting to Central Park, however. That's where you'll find the best ride of all. The hundreds of pedestrian paths are off-limits for cyclists, but a six-mile bike loop near its perimeter is car-less. It takes you all the way to north edge of Central Park, then back down again, with exhilarating hills, dips and endless diversions. There are also certain throughways for runners, walkers, bikes and limited cars. Here is where you'll hear runners and riders get verbal revenge on the cabbies that otherwise rule the city. 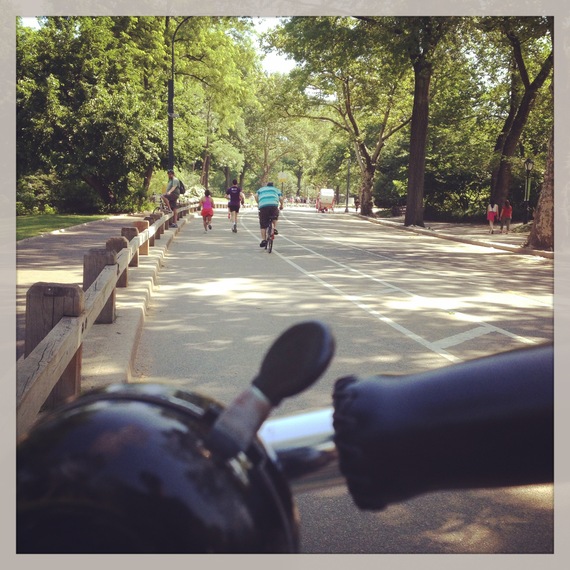 The same lack of bike infrastructure that plagues New York is increasingly alarming in L.A. It seems that almost every Angeleno knows of a bike rider who has been injured (or killed) by a car.

In fact, Chris Walker at L.A. Weekly recently wrote that Los Angeles is the most dangerous city in the world for bikes.

He points to statistics showing an average of two bicyclists per month are killed in traffic. A figure that multiplies as more cyclists hit the road... and more cars hit them.

Some positive news: Bike advocates the Pasadena Complete Streets Coalition seems to have gotten the ear of Pasadena planners to create a set of east-west protected lanes.

And the much-discussed My Figueroa plan will include cycle-ways.

As usual, Long Beach leads the way in bike progress, with 40 miles of Class I routes (bike paths dedicated to bike and pedestrian traffic).

Cedillo claimed his veto was to improve safety, but his rationale defies reason. It's an area that Los Angeles Times research showed is one of the most dangerous in the city. Over a 10-year period, David Zahniser and Armand Emamdhomeh report, the street had 68 car-vs-bicycle collisions, and 153 car-vs-pedestrian collisions. Nine of these resulted in death.

More, not less, bikeways are needed for safer streets.